Jonas with Friends vs K7T
K7T vs Deadpan Gaming

Deadpan Gaming opens up the draft bravely with a Sniper pick. This gives JwF the go signal to go for mobile heroes, like Storm and Clockwerk, to lock the Sniper down. With Axe and Silencer on board as well, it has all the initiates it needs to ensure a safe Sniper pick-off whenever Storm is capable. To add insult to injury, JwF goes for a Lycan pick for that perfect touch of rat.

Bans from JwF are focused on hard carries and bursts, including Queen of Pain. Meanwhile, DG focuses on removing big ultimates from the match to allow for more breathing room during teamfights. DG’s Lion, Earthshaker, Viper and Bristleback picks allow the team to be constantly ready.

JwF decides to go with a dual lane on top with Lycan and Silencer. Rather unusual but the players are probably relieved to find out that DG was gunning for a Viper going for the offlane instead of the usual Bristleback. JwF’s Axe owns the Dire jungle, as its Clockwerk patiently gathers experience in the offlane to get his hookshot ready as soon as possible.DG’s choice of a mid laner makes for a difficult early game. Sniper mid forces two others from the Radiant to babysit DG.alz, costing DG valuable experience and presence. What’s worse, around 3:40, DG.alz and his sitters, DG.Papapao and DG.eXe, terribly fail a gank on the mid lane. JwF.Siapo gets the kill and creates so much space for all the lanes on Dire. This third match proceeds much like Game 1, with JwF.Siapo crushing anyone in his path. Although at the 10:00 minute mark, Siapo is shut down after a tower dive – delaying what would have been a very early Bloodstone. DG capitalizes on this mishap and responds to JwF kills one by one.

Twelve minutes in it and Sniper is still locked down in a limited farming area with only Power Treads and 1500~ gold in his arsenal. DG.Papapao struggles whenever he had to make his way to the team fights, having to deal with a Blink equipped Axe on JwF.Panic.

At 17:00 and armed with a Bloodstone, JwF’s Storm is ready for a steamroll. Five minutes later, the Dire acquires the Aegis and begins to engage in teamfights with full confidence. They now essentially have a pseudo 5-man team distracting DG while Lycan kept the pressure on the lanes.

DG finds an opening at around 23:00~, outmaneuvering JwF in the Radiant jungle. 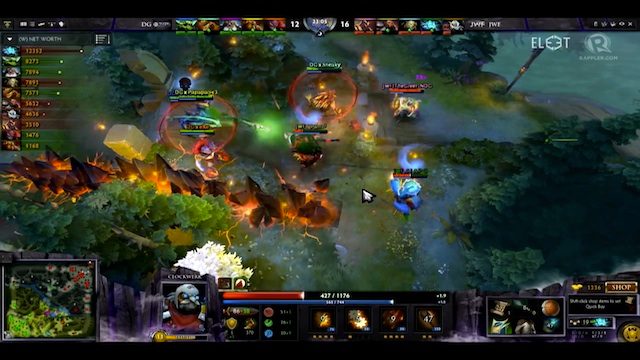 JwF.Siapo would have none of it and retaliates with more pick-offs on unsuspecting heroes. A badly timed pause aggravates the situation for DG when a smoked Radiant team, in an attempt to contest the Rosh kill, encounters a hardware problem. The game is interrupted right when Viper is on the low ground and revealed by a scouting Clockwerk. JwF.Siapo’s tactical Ball Lightning jumps clinches that battle for his team, drastically reducing DG’s chance for a comeback after a teamwipe. An untouchable Storm Spirit by JwF.Siapo, a persistent Lycan by JwF.XFinity and an underfarmed DG are the perfect ingredients for a hit and rat strategy. The game ends at 42:28 with JwF victorious and in first place for the night’s showmatch. 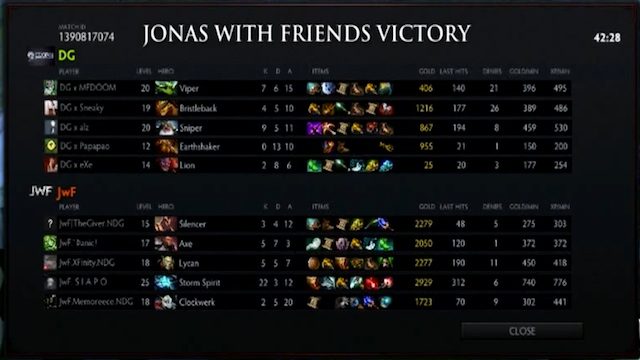