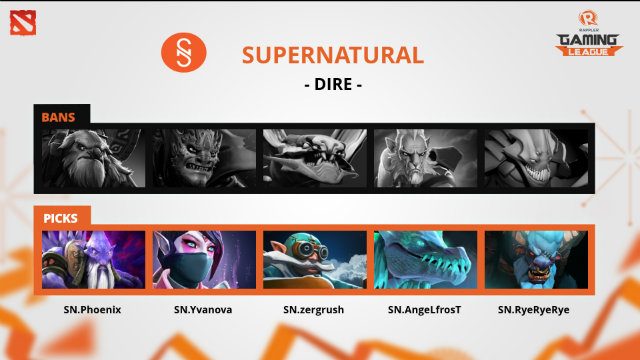 SuperNatural opens with a Gyro pick on SN.zergrush, complimenting it with two big initiate picks on Winter Wyvern and Dark Seer. A well placed Winter’s Curse after a timely Vacuum can set the stage for Gyro’s Call Down. Monsta X responds with big ultimates of their own, including Rubick’s Spell Steal, in hopes of using SuperNatural’s arsenal as their own.

SuperNatural catches Monsta X off guard, forcing an engagement well before the zero minute mark in Radiant’s jungle. Without any defensive skills to keep their hit points up for early game teamfights, Monsta X.Thawne-Rubick falls to SN.RyeRyeRye-Spirit Breaker, granting the latter an unnecessary first blood bounty.

SN.RyeRyeRye keeps everyone in Monsta X on the backfoot with his Charge of Darkness, leaving enough space for both Gyro and Templar Assassin to farm their hearts out and deal a quick and swift blow to Monsta X’s mid game. 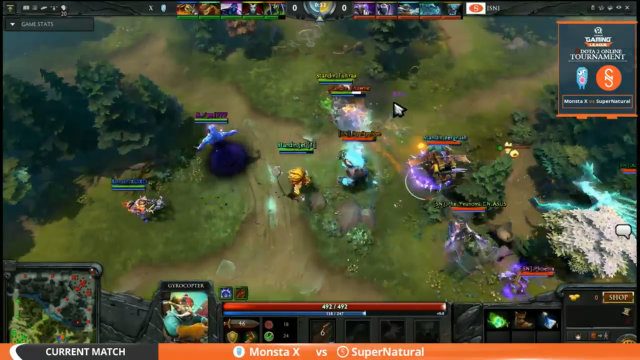 Even after taking a good beating from SN.Yvanova’s Templar Assassin in the previous game, Monsta X refuses to ban her, opting SuperNatural to repick her for their new draft. In line with the popular two-core meta in the recent patches, SuperNatural rolls out Phantom Lancer with their TA, coupling him with an obligatory defensive hero such as Dazzle for safe measure.

Monsta X attempts to recreate a similar lineup to SuperNatural’s lineup in the previous game: Gyro sitting at the core, surrounded by bursts and DPS follow-ups. They take a gamble with a Shadow Fiend pick, hoping to amass a greater amount of gold in a shorter amount of time before the opposing team goes online with a Cancer Lancer.

SuperNatural.RyeRyeRye becomes the first blood offering this round, handing over the bounty to Monsta X.Jet-Gyrocopter. This was immediately reciprocated by SuperNatural.Yvanova-Templar Assassin with a fancy psiblade shot on Monsta X.Ultras-Viper.

Maintaining an aggressive pace from the get go, SuperNatural dominates Monsta X considering their defensive selection of heroes. The latter keeps getting caught off guard with sneaky rotations as the former creeped in a larger area to assert map dominance over an otherwise offensive draft.