Jondar Uppercut goes for the offensive with Storm Spirit and Tusk, banning counter-initiates and reactive heroes to sustain aggression from start to finish. An Earthshaker pick on Jondar.TOney allows for better positioning and maneuverability for Jondar: this beast will help them deal with Burning Rae’s damage-based, push-centric aura lineup.

As early as 20 seconds before minute zero, Jondar.Cial-Winter Wyvern takes the first blood from Rae.Bell-sama, who was caught wandering aimlessly while waiting for the bottom rune. We are treated to an action packed early game, with Jondar.MiCkO-Storm Spirit asserting dominance across the map with quick responses from his team.

With little mobility and meat to hold and defend the lanes, Burning Rae watches as Jondar razes their towers one by one, one-upping their supposedly heavy push lineup. 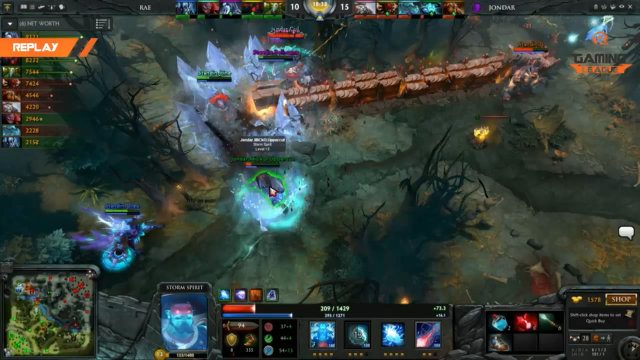 Confident in their previous draft, Jondar Uppercut retains two of their key heroes in the last game: Storm Spirit and Earthshaker. As if to show Burning Rae how it is done, they include Shadow Fiend in their draft as well, complementing their Phoenix and Witch Doctor pick for those big team fights.

On the other hand, Burning Rae goes for a different take on the early push, drafting Leshrac, Lina and Undying for both the sustain and the burst for versatility. However, as if their minds changed in the middle of the drafting phase, Rae goes for an off-putting Weaver pick that does not synchronize well with their draft and does not fare well against Jondar’s stun lock lineup.

What Burning Rae lacked in the previous game in durability they carried over to the next match, and Jondar made sure to punish them for making the same mistake twice in one night. Jondar continues to bring down the hammer with the same precision they had in the previous game. Rae responds in kind, successfully thwarting Jondar’s ganks and taking the lead well into the 25th minute mark.

However, Rae makes a critical misplay as they began to push the top lane, putting Jondar in a position to dictate the teamfights for the remainder for the match. Rae was not able to get back on their feet as Jondar.MiCkO-Storm Spirit begins a painful snowball, leading his team to a victory no later after Rae’s overenthusiastic push.