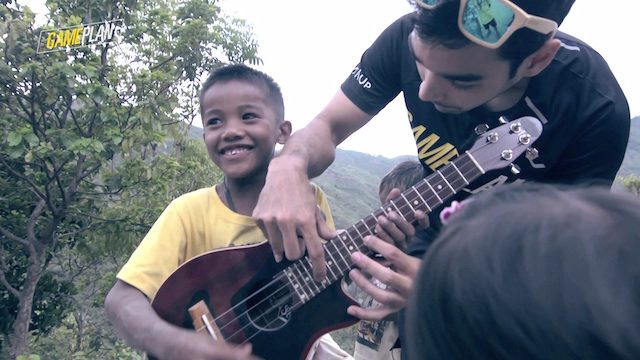 KALINGA, Philippines – Music is an integral part of one’s culture and lifestyle, a shared language we use to communicate with our peers and acquaintances. But what if cultural differences make language a barrier, will music still be as effective?

Gameplan host Ton Vergel de Dios was able to answer that as he spent an afternoon of singing and strumming with the kids of Buscalan, a small village in Kalinga.

“One of the things I didn’t want to forget (to bring) was my ukulele. Not just for my personal pleasure, but I wanted to share my music to the people of Kalinga. After all, I’m trying to take in this whole experience and I want to impart a little bit of myself whenever I go when I travel,” he said.

Different tribes and villages in Kalinga have different languages, which might make it hard for travelers to understand them. But this didn’t stop Ton from sharing his music with the locals. As he started to play with his ukulele, the kids began singing for him in their local language. He even lent his ukulele so the kids could try strumming their tunes as well.

“These kids don’t speak a word of English or Tagalog. They don’t understand what I’m saying but we got along. It just goes to show that language sometimes, it may be a barrier, but sometimes you don’t really need it to enjoy.”

“I felt that I was in their world, but I was trying to show them a part of our world too. There’s nothing like meeting someone from somewhere you’ve never been.”

“Music for me is a universal language. You don’t need a lot of words to communicate with people. With music, it’s much easier to have a good time. Music can bring the whole situation to life,” he shared. – Rappler.com