Apr 19, 2018 4:40 PM PHT
Chrisee Dela Paz
Facebook Twitter Copy URL
Copied
A Nielsen study shows consumers have been drinking less sugary drinks and even taking items out of their grocery baskets, as prices rose with the implementation of the tax reform law 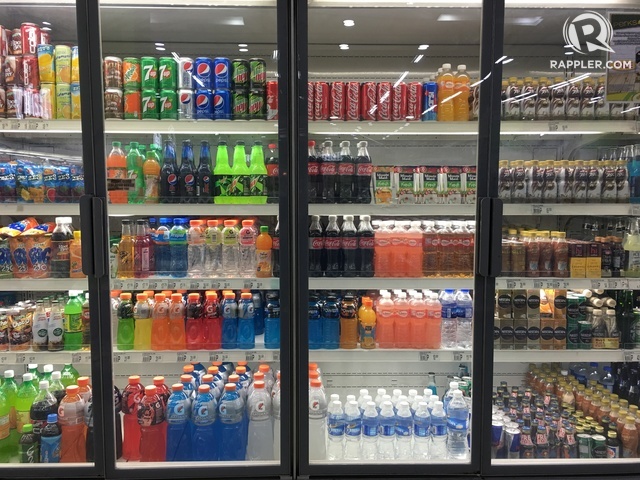 Sales of sugar-sweetened beverages have been declining in the past years, but the Nielsen study showed an accelerated drop in sales last February, the second month of the implementation of higher excise taxes.

“While healthier and more convenient options contributed to the slowdown of sugar-sweetened beverages over the past year, we can attribute the faster rate of decline to how consumers have changed their consumption and shopping habits amid the first wave of price increases,” John Patrick Cua, managing director of Nielsen Philippines, said in a statement.

The Nielsen Retail Index study called “Kamusta si Juan at Aling Nena” showed that in sari-sari stores, all 5 sugar-taxed beverage categories showed a faster sales decline of an average of 8.7% in February 2018, from 4.4% in February 2017.

Nielsen also said the sales of carbonated soft drinks in sari-sari stores declined faster by 7% in February this year, from only 4.1% in the same month last year.

“This reaction from consumers is a normal and expected behavior immediately following a price increase. Over time, some consumers may go back to old buying habits, while some will adopt their new buying patterns,” Cua said.

On January 1 this year, the government started implementing the Tax Reform for Acceleration and Inclusion (TRAIN) law, which reduced personal income taxes but increased taxes on cars, tobacco, sugar-sweetened beverages, and fuel.

Under the TRAIN law, drinks with high fructose corn syrup, like most soda brands, are now taxed P12 per liter. 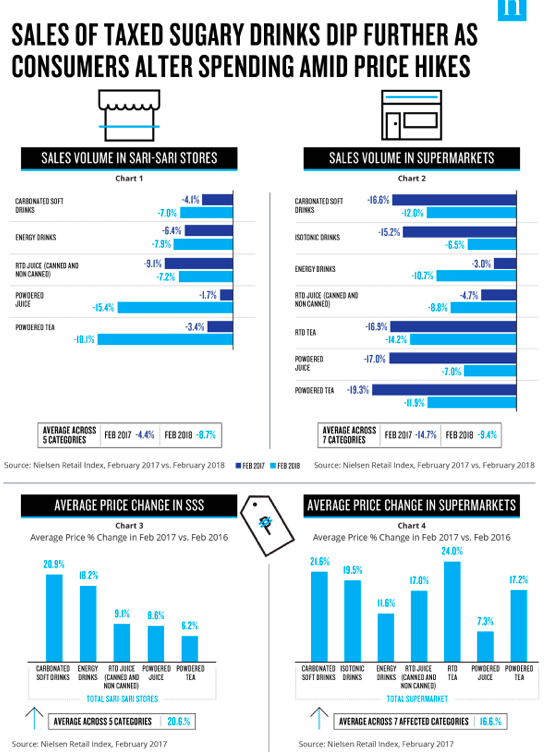 But the law excludes all kinds of milk, natural fruit juices, vegetable juices, and medically-indicated beverages from the sugar-sweetened beverage tax.

Instant coffee is also exempt from the tax, being one of the most consumed products of ordinary Filipinos.

Nielsen said focus group discussions conducted showed that shoppers have been lessening their consumption of sugary drinks, extending the use of products, and even taking items out of their grocery baskets.

“Consumers will not totally give up these sugary drinks because these are simple joys that they provide to their kids and themselves… Some drinks serve functional needs like boosting energy and other products are seen as a reward or personal treat,” Cua said.

Prices across 5 categories of sugar-sweetened drinks carried by sari-sari stores increased by 20.6% as of February this year, compared to a year-ago level.

Nielsen said carbonated soft drinks and energy drinks had the biggest price jumps among sari-sari stores at 21% and 18%, respectively, in February this year.

“Other sugar-sweetened beverages such as ready-to-drink juice, powdered juice, and powdered tea have not yet fully passed on the tax to consumers as prices have increased less than 10%,” the Nielsen study reads.

“Kamusta si Juan at Aling Nena” is a syndicated qualitative study on how Filipino consumers and neighborhood stores are affected by the new tax reform law. The study was conducted from February 1 to 6.

The study includes learnings coming from 12 focus group discussions among male and female grocery shoppers 21-45 years old from ABCDE homes who are decision and co-decision makers when it comes to grocery shopping, whether for self or for the household. – Rappler.com