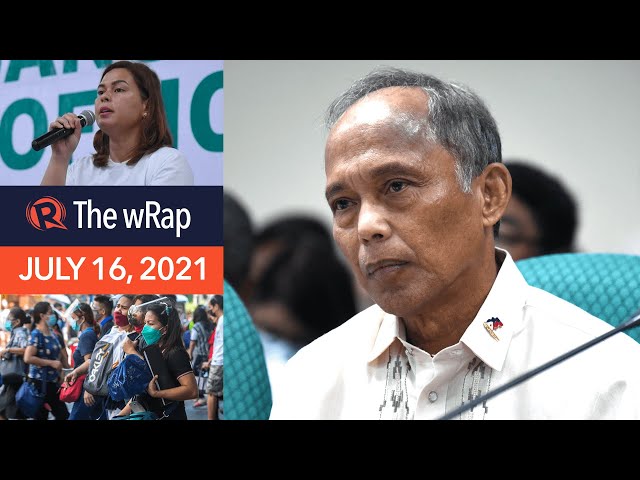 Despite Senator Manny Pacquiao’s move to expel Energy Secretary Alfonso Cusi from the PDP-Laban, majority of the party’s members express support for the continued leadership of Cusi, who is the party’s vice chairman.

President Rodrigo Duterte’s political adviser Jacinto Paras says the President will likely abandon his plan to run for vice president if his daughter Sara Duterte decides to run for president and teams up with Senator Bong Go.

The health department on Friday, July 16, logs 16 new cases of the COVID-19 Delta variant. Of these, 11 are local cases. This brings the total cases of Delta variant in the country to 35.

Senator Kiko Pangilinan sues Google Philippines and the owners of Youtube channels ‘Starlet’ and ‘Latest Chika’ over now-viral videos claiming he allegedly abused his wife, actress Sharon Cuneta, and that she was supposedly cheating on him.

BLACKPINK’s Rosé receives what might be the ultimate gift from a fellow musician: a new guitar from American singer-songwriter John Mayer. – Rappler.com