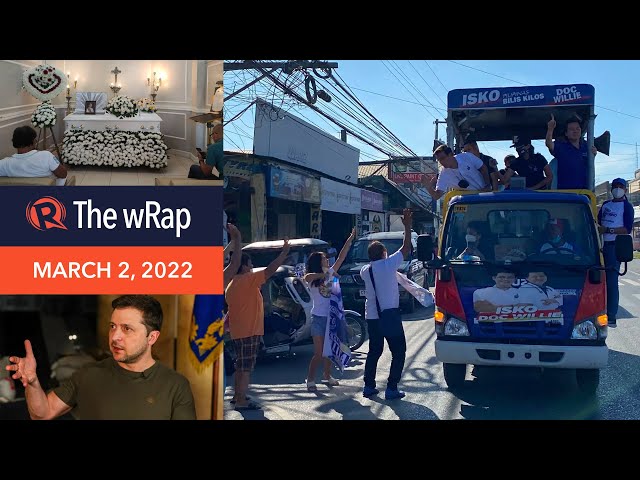 Presidential candidate and Manila Mayor Isko Moreno says he would rather turn to renewable energy and natural gas as alternative power sources, instead of nuclear power.

Family members of Lumad rights activist and volunteer teacher Chad Booc see his lifeless body for the first time Tuesday, March 1, in Davao de Oro province. Chad’s father is bent on taking his body for autopsy in Cebu City where the Boocs live, and press charges if the results prove foul play.

Ukrainian President Volodymyr Zelenskiy gives an interview Tuesday, March 1, in an office in the historic city of Kyiv, with sandbags blocking the bottom of the windows and the blinds pulled down. The interview shows the President at war.

Kris Aquino publicly shares the latest update on her health via Instagram, saying she was able to receive a new treatment. In other news, The Kissing Booth star Joey King is engaged to her boyfriend Steven Piet after more than two years of dating. Meantime, Hollywood actor-director Sean Penn found himself among thousands of refugees fleeing to Poland on foot, fleeing Ukraine. – Rappler.com