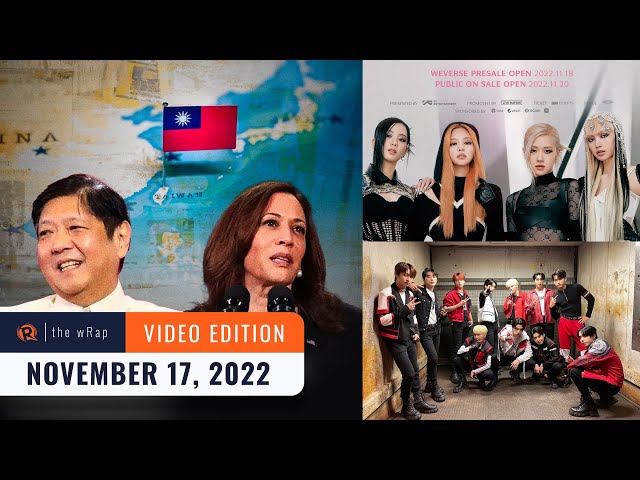 US Vice President Kamala Harris and Philippine President Ferdinand Marcos Jr. are expected to discuss tensions over Taiwan, during Harris’ visit to the Philippines next week.

Newly appointed Department of Health Undersecretary Camilo Cascolan says he will strive to boost the morale and welfare of healthcare workers, who’ve been on the frontlines of the country’s pandemic response.

Republicans are projected to win a majority in the US House of Representatives, setting the stage for two years of divided government as President Joe Biden’s Democratic Party controls the Senate.

Brazil’s Luiz Inacio Lula da Silva receives a superstar welcome at the COP27 summit in Egypt, as he pledges to recommit the rainforest nation to tackling the climate crisis and offered to hold future UN climate talks.

Heads up, BLINKS! Concert promoter Live Nation announces the ticket prices and seat plan for the upcoming BLACKPINK concert on March 25 and 26, 2023.

Brace yourselves, drag fans, as Drag Den Philippines introduces the queens who will be competing in its first-ever season.