Uber asks the Land Transportation Franchising and Regulatory Board for a change in penalty from a one-month suspension to a fine during a meeting arranged by Senator Grace Poe. The Commission on Appointments rejects the appointment of Social Welfare Secretary Judy Taguiwalo. Sunvar Realty Development Corporation says it will vacate the 2.9-hectare Mile Long property in Makati being claimed by the government. The Department of Agriculture says it will also cull around 400,000 birds from 30 farms within the 7-kilometer radius or the controlled area of the bird flu outbreak in San Luis, Pampanga. United States President Donald Trump backtracks on his response to the violent white supremacist rally in Charlottesville that ended in bloodshed, saying there was 'blame on both sides.' 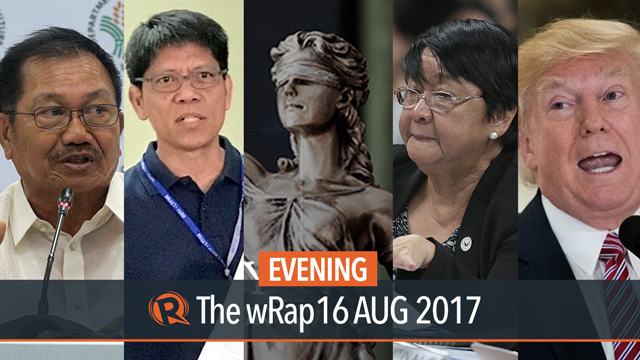