The International Criminal Court is moving on the complaint filed against President Rodrigo Duterte for thousands of killings during his bloody war on drugs. Senator Grace Poe slams Presidential Spokesperson Harry Roque for saying the Philippines will someday thank China for its artificial islands in the West Philippine Sea. Malacañang says there's no need to authorize the National Food Authority to import 250,000 metric tons of rice because about 325,000 metric tons of rice will arrive this month. Trade Secretary Ramon Lopez and officials of the Philippine affiliate of South Korea-based Hyundai Motor Company are facing plunder and other criminal charges over P1.1 billion worth of undue tax exemptions and alleged preferential treatment. The Canadian government says it will review a deal with the Philippines over the sale of 16 helicopters, over concerns on how the helicopters will be used. 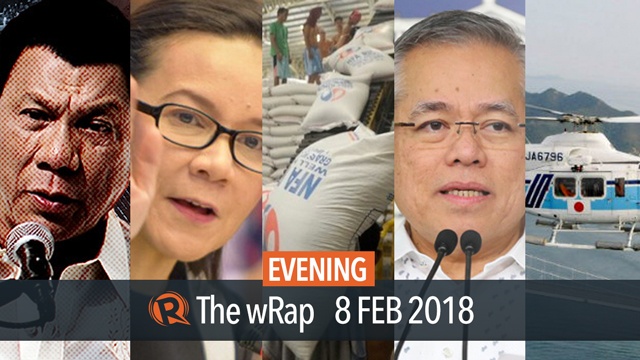