Malacañang vows a better MRT during the Duterte administration amid public frustration over the many problems besetting the train system. Philippine President Rodrigo Duterte offers China the chance for one of its firms to be the 3rd major telecommunications company in the country. Former Dangerous Drugs Board chief Dionisio Santiago fired by President Rodrigo Duterte for supposedly going on 'extravagant' trips abroad and bringing his 'mistress' along with him. House Speaker Pantaleon Alvarez says he will prohibit Chief Justice Maria Lourdes Sereno's lawyers from attending the House justice committee's next hearing if Sereno herself fails to show up. Charles Manson, the psychopathic guru who masterminded a savage killing spree in the United States in the 1960s, dies at 83. 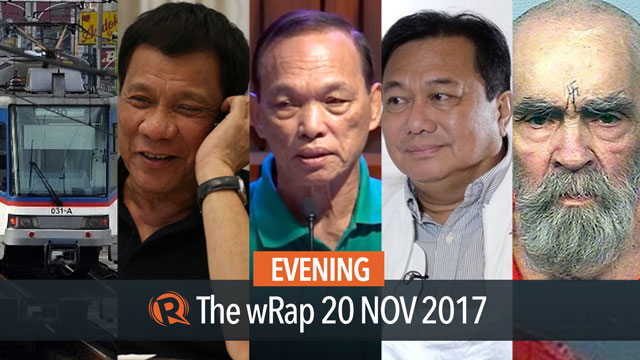