These women are not just wives

News feeds and air time in the Philippines are nowadays dominated by the stranger-than-fiction accusations and counter-accusations that female members of a showbiz family have been trading against each other. Caught between our wishes not to be a witness to this tragic washing of dirty linen in public and our readers’ hunger for updates, the media, as far as I can tell, have at least tried not to be hysterical in reporting this.

There’s another silver lining I observe in how the media have reported about the Barretto family saga. Most tried to report on the personalities involved as actresses Gretchen, Marjorie, and Claudine, who happened to be sisters quarrelling for all their social media neighbors to see and hear. It was not up to us to call them degrading names or refer to any of them as some generic “sister” of whomever we thought was the most popular among them.

Because in reporting – even entertainment reporting – we should acknowledge individuals who have made a name for themselves, and not refer to them as some appendage to a supposedly better-known relation.

Some might argue that it is a matter of perspective in cases where the people involved are from different fields. Remember how some news outlets reported in September 2014 that “actor George Clooney” was marrying a “lawyer” – or, in some cases Clooney just “marries” without reference to the bride in the headline?

Compare that to how Business Insider has consistently reported on “an actor” whom hotshot international lawyer Amal Alamuddin has married: “Internationally acclaimed barrister Amal Alamuddin marries an actor” (in 2014) and “Amal Clooney made her husband tear up after calling him her ‘great love’ in a speech — and you’ll cry, too” (in 2018).

But in fields where partners or spouses or family members are both prominent figures? There’s no excuse for reporting on one person as someone in another’s shadow. 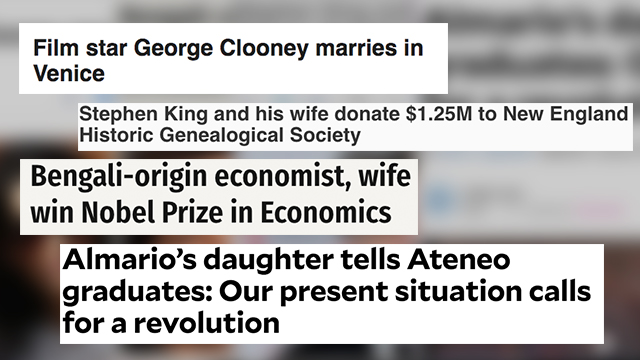 That was why headlines like “Bengali-origin economist, wife win Nobel Prize in Economics” would naturally stir uproar. Why, Esther Duflo is an accomplished economist on her own. (READ ALSO: As Esther Duflo wins the Nobel Prize in economics, here’s the uphill battle women face in the field)

As if the discrimination wasn’t bad enough (it was mostly in India where the reports only headlined with Abhijit Banerjee or Abhijit Banerjee and his wife or no reference at all to the 3rd winner, Michael Kremer), the secretary general of the Bharatiya Janata Party downplayed Banerjee’s Nobel Prize. The official implied that the economist got it not because he was good but because his wife was a foreigner. Rahul Sinha’s words grate in the ear: “Those people whose second wives are foreigners are mostly getting the Nobel prize. I don't know whether it is a degree for getting the Nobel.”

And remember this headline: “Stephen King and his wife donate $1.25M to New England Historic Genealogical Society”? Tabitha King is, of course, “more than just ‘Stephen King’s Wife,’” being a published author herself and a philanthropist.

In the Philippines, I squirmed at this headline from 2018: “Almario’s daughter tells Ateneo graduates: Our present situation calls for a revolution.” I know, the father is a national artist. But surely, the lady, Ani Rosa, was asked to address the graduates not because she happened to be born to Virgilio Almario but because of her own accomplishments. She runs Adarna House, the publisher of original Filipino books for children and young adults, and the progressive The Raya School.

Anyway, we learn every day.

The past week, we put the spotlight on how two young, female mayors – with both the blessing and curse of being their fathers’ daughters – are making their own marks: Abigail Binay of Makati City and Joy Belmonte of Quezon City. You can read more about the first 100 days of other first-term mayors on our special page, Spotlight on Cities 2019.