“In the course of this past year, I’ve found myself wondering, more than a few times, whether we are living through the world’s stupidest era. Of course, it’s not as though people haven’t been doing dumb things since the dawn of time…. But, as the second decade of the twenty-first century proceeded inexorably toward its culmination, it began to seem to me as if human folly – in politics, arts, and culture – was almost willfully outdoing itself.”

Those were the opening lines in Naomi Fry’s wrap-up of 2019 for The New Yorker whose headline – “The year in stupidity” – inspired our last Newsbreak Chats episode for the year. What could be a more perfect line to also describe what the Philippines has witnessed the past 12 months?

On Wednesday, December 18, I sat down with 3 other Rappler seniors: managing editor Glenda Gloria, data and strategy head Gemma Bagayaua Mendoza, and investigative editor Chay Hofileña. We compared notes and exchanged frank assessments on the statements, policies, and actions that could have only been made by newsmakers who were dazed, not thinking clearly, lacked common sense, or just too arrogant to care.

Chay asked me for 3 events where stupidity in the public sphere, specifically the government, was displayed. I warned her there was no way there could only be 3 instances, so I drew up a list of themes or categories. Each category would merit a separate newsletter or column, but I’ll mention just a few cases that fall under each.

Rise of the less qualified in the 2019 national elections 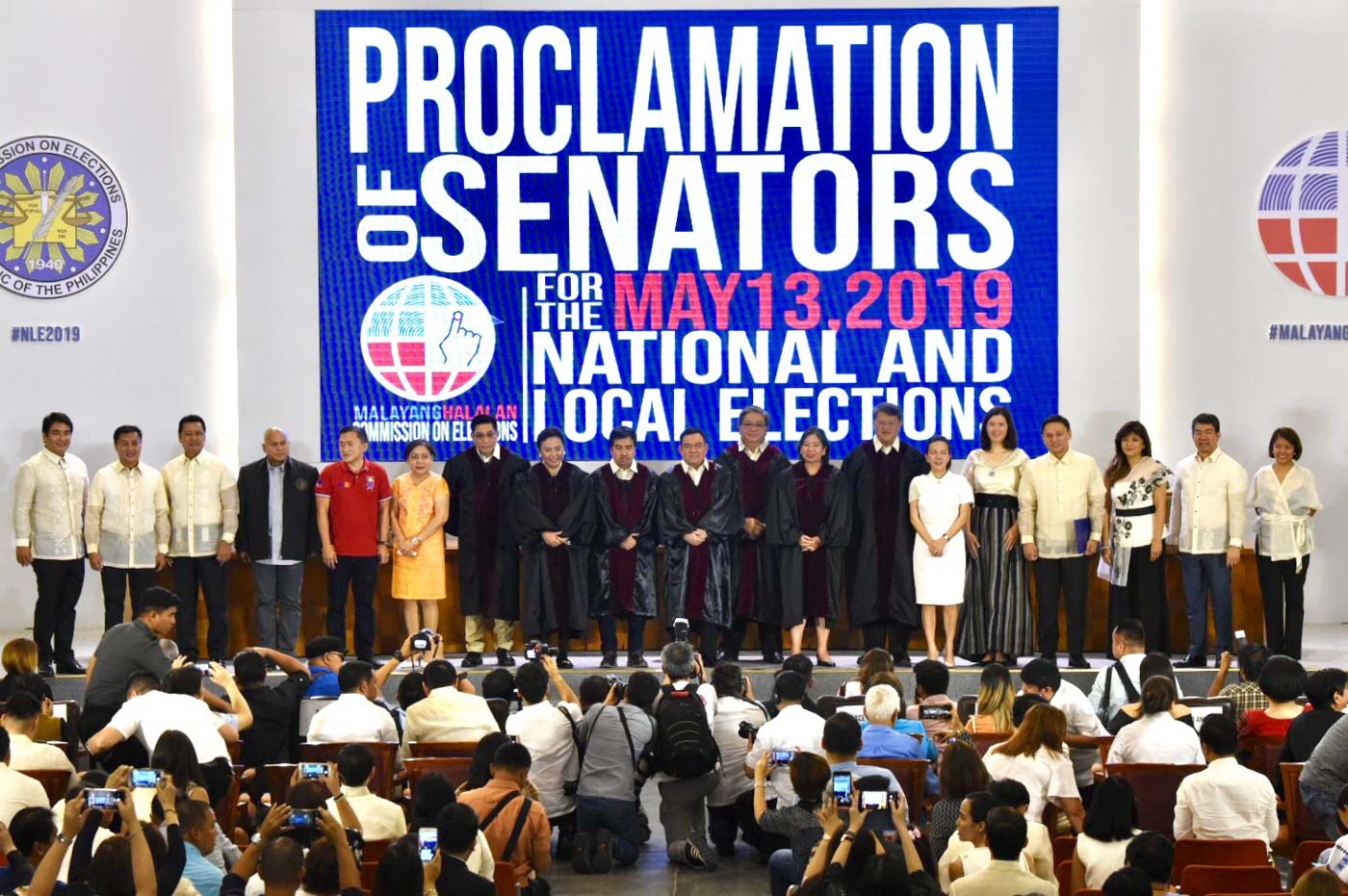 WINNING senators pose with the 7 members of the Commission on Elections after their proclamation on May 22, 2019. Photo by Angie de Silva/Rappler

Why didn’t we elect a single opposition candidate, especially when they were far more qualified than most administration candidates? Seriously, Bong Go over Chel Diokno? Bong Revilla over Bam Aquino? Bato dela Rosa over Neri Colmenares? Imee Marcos over Samira Gutoc? What does that say about us voters?

And we’re not only talking about the Liberal Party-led main opposition coalition, but also the likes of Labor Win. It was the first time that labor leaders from all shades came together, all in the name of advancing workers’ interests, but why didn’t the registered voters among the approximate 40 million workers in the country send these labor candidates to the Senate?

The opposition themselves share the blame. By refusing to meet each other halfway, so they could form a unified slate, starting too late in the game, and adopting the wrong tack of attacking a very popular President Duterte who wasn’t even a candidate, they made it easier for the administration allies to sweep the polls. 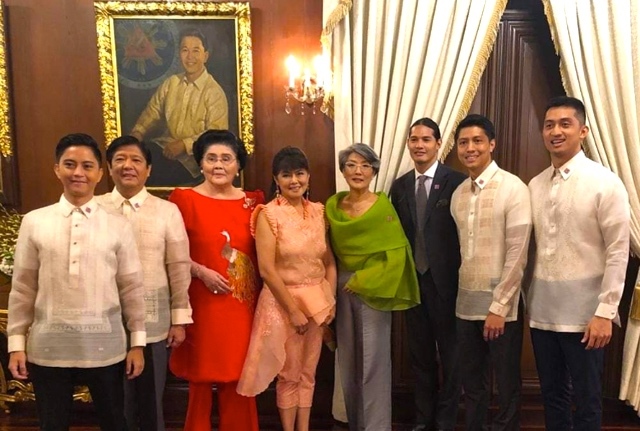 FAMILY PICTURE. The Marcoses in front of the portrait of their patriarch in Malacañang after Senator Imee Marcos (4th from left) and Ilocos Norte Governor Matthew Manotoc (right) took their oath before President Rodrigo Duterte. Photo from Imee Marcos' Twitter page

Bank records from the Anti-Money Laundering Council (ALMC) showed that, consistently, the amount of pork barrel kickback that the camp of alleged mastermind Janet Lim Napoles claimed they delivered to then-senator Ramon “Bong” Revilla Jr matched what was deposited in the various bank accounts of the lawmaker and his family.

The anti-graft court justice who heard the case from start to finish voted to convict Revilla, but the additional members of a newly-created special division, who didn’t have much time to go over the voluminous documents of the case, outvoted him. They put a lot of weight on the testimony of a supposed handwriting expert, who said the senator’s signature was forged.

Another dissenting justice said, even if the P87 million monitored by the AMLC didn’t come from the diverted Priority Development Assistance Fund of the senator, he could still be liable for graft. The amount wasn’t commensurate to how much Revilla was earning.

Now, Napoles is in jail. Revilla’s former chief of staff Richard Cambe is in jail. And Revilla has been elected back to the Senate, and has a new TV show on GMA-7.

Two decisions by the Fourth Division of the Sandiganbayan in the last quarter of the year sent the Marcoses this message: plunder pays. In October, it dismissed a P267.371-million ill-gotten wealth case filed against the late dictator Ferdinand Marcos; in December, it was a P200-billion case that was junked.

The reason: the documents submitted as evidence by the Presidential Commission on Good Government were photocopies. I know courts have certain standards, but given a host of other types of evidence that corroborated each other, this is like saying, if the birth certificate you present is a xeroxed copy, then you were not considered born.

Failure of officials to grasp the transportation crisis’ gravity 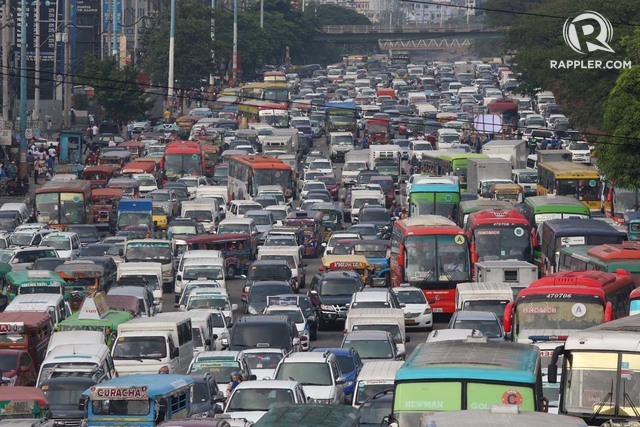 When your Metropolitan Manila Development Authority organized press conferences to give a platform for outrightly poorly-studied traffic scheme – such as making EDSA one-way, and banning cars on certain days according to their brands – instead of making its engineers come up with a plan to address the traffic problem, we definitely had a problem.

Making matters worse, the government imposed a provincial bus ban to make EDSA traffic light. Passengers from Cavite had to drop off at PITX along Coastal Road in Parañaque. All buses from the Southern Tagalog provinces and Bicol had to end their trips in Santa Rosa, Laguna. Those from the Northern Luzon provinces had to stop in Valenzuela City.

Yet, in those terminals, there was no system in place to bring those hundreds of thousands of passengers daily into Metro Manila proper. The convenient options for commuters then was to book a car or take a taxi.

Many commuters would take 2-3 hours to reach their work places, yet the presidential spokesman said there was no transportation crisis, and that the solution to getting to work or appointment on time was to wake up earlier. 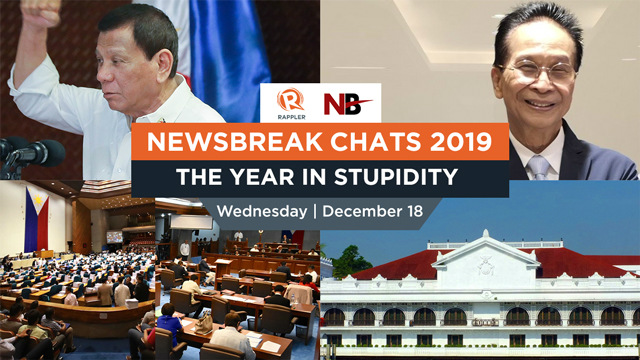 On Newsbreak Chats, I also mentioned as display of stupidity the mismanagement of the preparations for the Southeast Asian Games 2019, as well as the inroads we have given China into our territory, crucial public utilities, and foreign policy. I encourage you to watch the full episode here to follow the discussion and know what the 3 other ladies had to say.

Finally, Chay asked each of us to describe 2019 in one word. I said, “facepalm” – because when we thought our government officials could not say or do anything worse, they’d surprise us and go even lower. And we, as constituents, are just looking on, letting them get away with lies, mediocrity, inefficiency, corruption, abuse. We were mostly content being “activists” online.

Yet, we remain hopeful for 2020. Because it’s our responsibility to be so. When we get weary, when we despair, when we stop caring, we will only get more of what has made 2019 a year in stupidity.

This newsletter will take a break during the Christmas week. But stay connected with us at Rappler. Email me your thoughts at miriamgracego@rappler.com. If you want to help Rappler pursue in-depth reports on specific sectors and issues, you can donate to our investigative fund here. You can check out the conversations I engage in on Twitter @miriamgracego and follow the stories I share on Facebook.

HERE ARE STORIES YOU SHOULDN’T MISS: 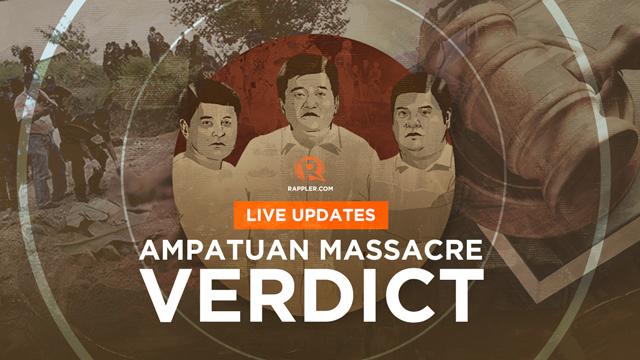 The verdict in the trial of the decade, the Ampatuan Massacre, on Thursday, December 19:

We give you more yearender specials:

For those who want to relive the thrill of our athletes’ victories despite the odds: