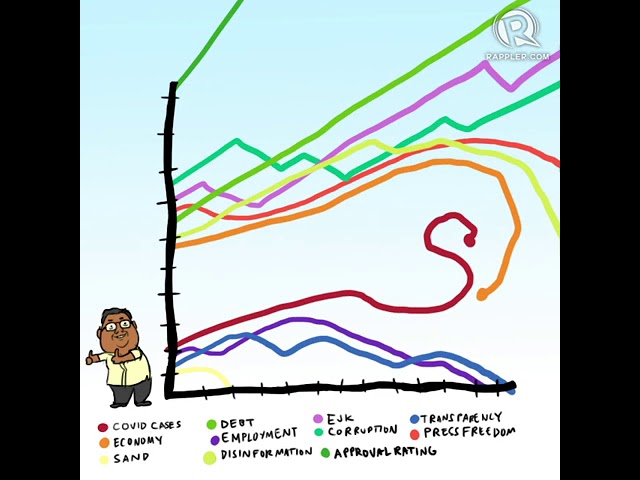 He’s talking about their survey that says 92% of Filipinos believe that President Rodrigo Duterte has “done well” in preventing the spread of the coronavirus in the Philippines.

But that’s only half of it. Duterte’s performance rating rose to 91%, getting the highest boost from the poorest Filipinos, in the first major nationwide survey during the COVID-19 pandemic.

Experts tell us expectations are so low – being the worst performing country in Asia in the fight versus COVID-19 and 18th worldwide in total number of cases – could not, would not, dent the esteem of Filipinos for their President.

In an online forum sponsored by the Foreign Correspondents of the Philippines, analysts called this a “reference bias” – when things are so bad worldwide, we feel better off, or so we’d like to think. It’s better than thinking the situation is hopeless. It’s a coping mechanism for this pandemic where we give the leader of the land a get-out-of-jail card. (LISTEN: [PODCAST] 4 reasons why Duterte’s survey ratings are still high)

The analysts think it’s the cash dole outs that did the trick. Forget that it was barely enough, especially for the dirt poor. Forget that the last tranche was in July, or 3 months ago. It’s incredible that Filipinos remember that, or do they?

That’s the sort of well-meaning recalibration of the yardstick that analysts do so well. But there are other ways to look at this survey.

In an interview with Leloy Claudio on Rappler’s Basagan ng Trip, Holmes defended the professionalism and integrity of his survey group. We don’t doubt that. Neither do we doubt that the survey was done in accordance with the established practices of random sampling.

It’s in the interpretation where we beg to disagree. We’d rather see it from the lens of power dynamics and in the context of the constant gaslighting of a people.

Analyst Richard Heydarian attributes part of Duterte’s appeal to “performative politics.” But it’s more than that. Heydarian also notes that “the climate of fear cannot be taken out as a factor.”

The constant cursing, the threats of “shoot them dead,” jailing political enemies like Senator Leila de Lima, persecuting critics like ABS-CBN, Rappler and Maria Ressa, cursing God, telling soldiers to shoot rebel women in the vagina – these have taken their toll on our national psyche.

UP Sociologist Randy David said it best in his column in the Inquirer: “One need not go to the country’s remotest barangays to find people who would readily give “safe” answers than say something that could expose them to unwanted drug raids or to being denied “ayuda.” To people who have felt vulnerable and powerless all their lives – and they are the majority in our country – nothing could be more dangerous than expressing their true opinion about their leaders at the wrong time.”

When we face those pollsters, we don’t have to lie, we simply tell them about our altered reality.

Indeed, the worst lies are the lies we tell ourselves.

What’s our altered reality? We’ve taught ourselves to block out thoughts of an estimated 27,000 slaughtered in dark alleys in slum areas, even if they are 17-year-olds who dutifully tend to the family sari-sari store. We tell ourselves that’s an obscene number so it can’t be true.

That blurring of reality is enabled by disinformation and an intimidated media. The police have rolled back the numbers of extrajudicial killings, now called “homicides under investigation” to 2016 levels or 5,000-plus. The decreasing dead body count – belied by the booming funeral parlor business – is part of the disinformation landscape.

In the face of an unseen coronavirus enemy, we retreat into our homes and our mental panic rooms – the nameless, faceless victims of extrajudicial killings are out of sight and out of mind.

As we try to cope with an overload of bad news, we are constantly bombarded by manufactured facts. How can we resist?

Media tells us there’s mounting evidence of government incompetence in dealing with the coronavirus. What mounting evidence? In an information landscape littered with lies, how can we believe anything?

In this war zone, Duterte’s late Monday night ramblings become reassuring. He’s dependable in his bluster. He’s savage but authentic. We’re masa. He’s masa and we get him.

But Holmes discounts disinformation/misinformation as the root cause of this national blindness by saying “only a few” are exposed to it. He says while roughly 61% are on social media, only 1/3 of them get their news from social media (even as he says the 61% are all on Facebook).

Can we really say a citizenry addicted to Facebook is not (dis)informed by it?

If social media influence were not so powerful, how could dark horse Duterte have won in 2016? How could he have harnessed OFWs disgruntled by the glaring blunders of Noynoy Aquino and Mamasapano? How could he have electrified the nation by his “change is here” rhetoric without Facebook?

The other reputable pollster in the country, Social Weather Stations, came out with this report in June 2019 (pre-pandemic) that says more Filipinos get news from Facebook than from radio and newspapers combined. But like Pulse Asia, SWS also reported that television remains king in the Philippines, with 60% of Filipinos consuming news daily through the traditional media platform.

The latest January numbers from Hootsuite show 73 million (67% penetration) use the internet in the Philippines. But here’s the clincher: 64% said they increased their use of social media because of COVID-19 – the highest in the world. India follows at 59% and South Africa comes in third at 55%.

The landscape has drastically shifted under the pandemic. The country’s largest network ABS-CBN was shut down last May. There is no denying the source of real news and credible information has shrunk even further.

The “TV is king” mindset skews Pulse Asia and other survey groups’ ability to appreciate the magnitude of disinformation. New studies say Filipinos naively pick up information, not just on social media, but more and more in chat groups, where they implicitly believe a relative or a friend.

In fact, there’s increasing evidence that the disinformation machinery has shifted operations to closed chat groups. (READ: 5 tips to shield your group chat from misinformation)

In particle physics, there’s such a thing as the observer effect. Somehow the act of observing something to understand its nature essentially changes its true nature as the observer becomes part of the system.

Science is supposed to be morally neutral but even pollsters inevitably fall on one side or the other: they can be truth-tellers or become part of the myth-building apparatus.

In their desire to compare survey results across time, the “impartial” observers may be trapped by their own methodologies and templates – perhaps lacking the agility to factor in new variables like social media and the effects of disinformation on public temperament.

As election year 2022 nears, we pray hard that the pollsters do not become unwitting instruments in perpetuating a national delusion. – Rappler.com