[DASH of SAS] Getting schooled on gender fluidity

Facebook Twitter Copy URL
Copied
'This is the generation that knows that love--romantic or platonic--does not see gender or sexual orientation. It only sees the person'

I’m the sex columnist in my house, but these days, it’s me who is getting schooled on gender and sexuality by my 13-year-old. (For the parents who are reading this, don’t panic. There is a point to be made here.)

More and more, it’s me asking questions about unfamiliar terms even if I believe that I am quite knowledgable about the topic of sexuality, thanks to friends and colleagues who give me mini SOGI (sexual orientation and gender identity) briefings.

We’ve always had open communication lines when it comes to sexual health matters and I have always tried to answer my child’s questions as truthfully as possible. They were maybe 6 or so when they saw my blog post explaining the step-by-step process of getting an HIV test; they weren’t surprised but I was asked me why I was getting an HIV test when I only had sex once – ”when you made me, right?”.

With a bruised ego and only slightly feigned indignation I joked, “Once?!? C’mon! Gimme some credit here!”

Then I think they were probably 9 or so when they told me about Pokemon gender neutral characters. Later, they related it to the commercial success of the brand saying that “the characters are cute enough to appeal to girls and the designs are awesome/cool enough for boys to like.” The fact that some characters did not subscribe to the usual “gender binary” – yes, they use that term – added to the brand’s cool factor. 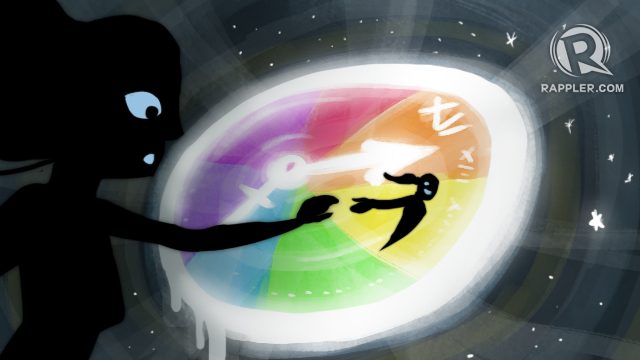 Now that they have been getting older, we have been having more Q&A sessions –with questions volleyed on both sides.

Unfamiliar terms make their way into our casual conversations and I have to interrupt and ask, “Wait, wait! What does that mean?”

First, it was about being “asexual”.

“Does that mean not being into sex at all?!” I asked, the parent in me admittedly a little relieved. The kid is 13 afterall.

“Mom, just think about it in terms of food. If this were food, ‘pan’ would mean you like everything,” they patiently explained to me.

And then, another week, she told me about her musings about some other term that I mistook as a fancy way of saying bi-sexual.

My kid set me straight, saying very matter-of-factly, “You can have romantic feelings for someone and not want to have sex with them.”

I joked that if that notion caught on, I would be out of a job.  That comment was met with muted exasperation and suppressed eyeroll.

It’s all very new and confusing to me and my kid admits that the nuances are difficult to grasp and the boundaries hard to define.

“It’s all about being gender fluid, Mom!”  has become their blanket reply when my questions start to resemble a laundry list.

I haven’t (so far) been dismissed for my ignorance or judged for my slow comprehension and I don’t judge them for trying out different identities to see what fits. This week, I think we’re trying on demi-boy. Or maybe that was last week. I’ve lost track. Sometimes so have they.

More than once, in the middle of our conversations and in jumble of attempts to explain and clarify, we stop, look at each other and just say, “Oh, we’ll figure this out – together.”

For the most part, I marvel at how gender and sexual orientation are non-issues to young people. My kid tells me that these sexual identity terms are everyday conversations on Tumblr. I can dare to hope that we are possibly looking at a generation who naturally, instinctively sees the person for who they are and not for their sexual orientation. (Us older folks may do it the other way around)

Elizabeth Gilbert, on her Facebook page, once wrote that she loved this generation of young people because they were “raised to be nice to each other”. She cited the case of a 17-year-old straight boy who took his gay neighbor and childhood best friend to the prom.

“The straight boy wanted his gay friend to enjoy the experience of prom, and the gay boy didn’t have a date, so the straight boy gallantly invited him. They rented tuxedos, a limo, took photos, danced, and had a ball. Nobody in their school batted an eye. And the real miracle is — the straight kid couldn’t even understand why I thought this was such a big deal. To his mind, it was simple: He loved his buddy, and saw no reason why they couldn’t go to the prom together as friends. Nothing about the situation made him feel threatened in the least. Nor did their classmates see it as strange.”

These are the kids for whom the generation gap means being insulated from the views of a judgemental older generation and the freedom to form their own opinion and identity.

We could learn a thing or two from these young people and their friends.

I know I am even whilst I find myself lost in this labyrinth of sexuality terms. It will be confusing and we will make mistakes for sure. But I look at my kid and am grateful that I have them to hold my hand as I continue to be schooled on how to build a growing vocabulary on sexuality orientation and gender identity. – Rappler.com

NOTE: The use of the gender neutral pronoun “they” throughout this article is deliberate. This article was written with the full participation, cooperation and oversight of my 13-year-old who acted as both editor and sideline critic.