President Benigno Aquino III’s last State of the Nation Address (SONA) contained a rather surprising pronouncement where he called on Congress to pass the long sought-after legislation that seeks to ban political dynasties.

Considering that the president was thrust into the zenith of political power by virtue of his being a scion of a well-entrenched political clan, such a statement would likely be met with a healthy dose of skepticism by many sectors.

Now, let us assume for a moment that PNoy is truly sincere with his request for Congress to pass the anti-political dynasty law even though there are political realities that militate against that being the case. There might still be a ray of hope.

PNoy has, in the past, championed legislation that seem to go against what he has been expected to act on given his political-economic background. The passage of the RH law provides some encouraging signs for this. 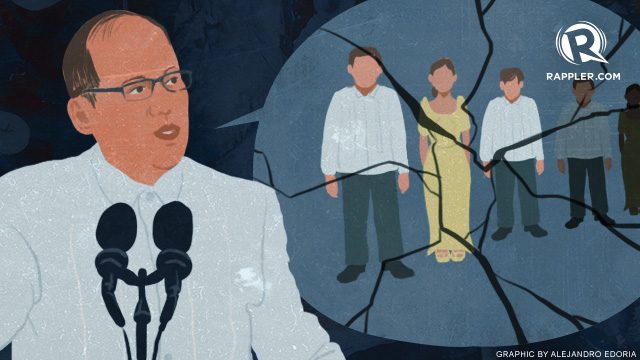 Any proposed anti-dynasty legislation should contain provisions that not only seek to avoid the concentration of political power to a select few families but also pave the way for a much broader participation of best citizens in electoral politics. Yet, passing such a piece of legislation would be very difficult. For one, Aquino’s term is about to end and this greatly limits the window of opportunity available to him to pass such a landmark law.

During the 2015 Philippine Political Science Association International Conference, Dr Alicor Panao presented a study that implied that most important pieces of legislation must be passed during the first 2 years of a presidency. Otherwise, it becomes next to impossible to get things done given the other priorities that Congress often focus their attention on, when it is about to wind up its sessions.

More critically, a cursory glance would show that Congress is dominated by members of various entrenched political clans. This observation has been validated by scholars like Teehankee (2001), Gutierrez (1992), and Coronel et. al.(2004).

Such make-up of Congress is the chief reason why legislation against political dynasties have not seen the light of day since 1987, despite of it being mandated by the Constitution itself. Surely, one cannot expect that scions of the most powerful clans would act against the interest of their families.

Is it worth it?

While it may appear to be an impossible dream to realize such key legislation, it is still worth looking at considering its potential impact on our political and economic development prospects. Mendoza et. al (2014) suggested that the presence of political dynasties in many local government units in the country have had negative correlation to their respective economic development.

To make matters worse, most of these clans have seen their economic well-being improved while their constituents have largely remained poor. Given such circumstances, enacting an anti-dynasty law is a necessary albeit insufficient condition for correcting the maladies of our political system.

I argue that the enactment of codified rules in the form of a Republic Act and its accompanying Implementing Rules and Regulations may not be enough to ensure that the goals of such a landmark law will be truly achieved. There had been a number of occasions where the presence of formal rules designed to level the playing field in terms of participating in the contestation of electoral positions have been circumvented by the members of political dynasties.

Querubin (2012) argued that members of political clans have skirted the provisions of term limits by fielding in other members of their nuclear families once the 3-consecutive-term limit has been reached by a sitting member of the clan. This is clear evidence of the shrewd adaptability of members of Congress to perpetuate themselves in power despite of the existence of formal rules that were designed to shackle them.

So while formal rules may not be enough, I posit that if we are able to cultivate a set of informal rules that will compliment any anti-political dynasty, formal legislation would give us a better chance of seeing enduring political change in the Philippines.

Helmke and Levitsky (2004) defined informal rules as a set of socially shared rules among people that are created and are self-enforcing outside of official channels.

Informal rules are not new in the Philippine context. One frequent example of this is the gentleman’s agreement that we have seen in the Philippine Senate, where those who contest the presidency of the chamber would agree to a term sharing scheme in order to avoid a leadership vacuum from happening.

An informal rule supporting a codified law against political dynasties can emerge through a number of ways. Individuals who could set an example of delivering honest and competent public service, while avoiding the temptation of perpetuating oneself or his family in power, must be celebrated in the public consciousness. In the olden times, the esteemed roman politician, Cincinnatus, exemplified this by fulfilling his role as a public servant and by going back to being a farmer once his term was up.

In the Philippines, the late Jesse Robredo was probably the closest thing to we had to having such a leader.

Forcing politicians to self-impose limits to their stint in the seat of power has to become the new norm. There is probably no better time to be able to accomplish this than in this day, where ordinary citizens have the power to contribute to the development of informal rules such as strictly limiting the number of family members in politics, and ostracizing those who violate such an informal rule by not patronizing them during elections. This will go a long way in shaping the desired political behavior for both politicians and the electorate.

Only when we have the right mix of formal and informal rules will we able to usher in a new era of political and economic development for the country. – Rappler.com

Raymund John Rosuelo teaches political science at the University of Makati. His research interest is on local political dynamics and governance. He is currently the secretary of the Philippine Political Science Association.