Pedestrian musings: The destruction of mobility in the metro

Aug 22, 2015 12:30 PM PHT
John Labella
Facebook Twitter Copy URL
Copied
Who are the pedestrians? Has Manila ever had a truly ambulant culture? If not, then what ends have the spaces for the people served all along? Recently I got caught up in the romance of a city stroll. With slow gait I crossed a footbridge rising over a busy road. This bridge holds some fancy for me because I am at heart a provinciano, easily impressed by things urban. And though passerelles are common in Makati, an elegant footbridge is rare in my part of Metro Manila.

The footbridge traverses Katipunan Avenue. An idyllic university campus thrives on one end, catering mostly to affluent folks. On the other end are shrines of consumption: a shop advertising nitrogen desserts, cafés serving hundred-peso coffees, and condos rented at irrationally high prices. On the public road itself the traffic stalls, fuming.

Not too long ago public spaces were a matter of indifference to Manila’s privileged class. There was a time when folks who enjoyed a good share of the city’s wealth did not give a hoot for places used by folks who had zilch.

What changed? Monstrous traffic, alongside lousy public transport, is a decisive factor. Moving around has become intolerable. The burgis thus have come to see as their shared interest the fate of roads, sidewalks, and crossings. 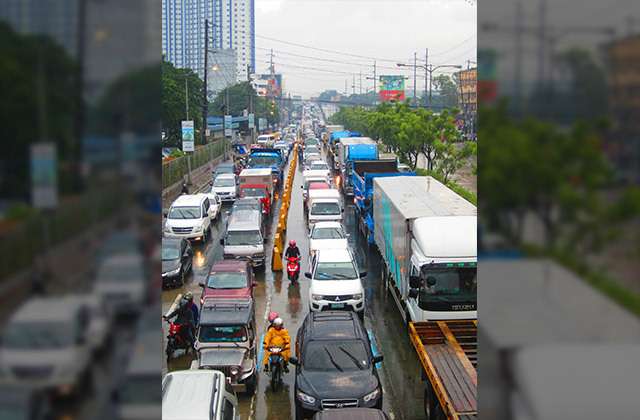 The destruction of mobility in Manila, then, has a positive aspect. Experiencing more keenly than before the precariousness of city-dwelling, the burgis have come to worry about civic infrastructure. Public spaces as the means for movement can be seen clearly now as an interest that cuts across social boundaries.

The state’s neglect of our infrastructure is forcing us to confront – beyond abstraction – what the poor have always recognized: the modern city is as much place of restless hope as of decay.

Almost a century ago, Walter Benjamin asked himself what decay might mean, especially for the modern burgis. He wrote: “What are the ruins of the bourgeoisie? Where, within the new, runs the boundary between reality and semblance?”

“The new” here refers to modernity, whose locus of energy is the city. Examples of semblance in “the new” are the city’s glittering baubles – objects that tend to shroud what is real, to distract the mind from what needs to be perceived and worked.

Semblance hypnotizes. It hinders city-dwellers from paying attention to whatever begs critical thought and transformation. Is there any hope for the mind to break the hypnotic spell, to get past what merely appears?

This hope for Benjamin lives amid ruin. The reality that semblance hides becomes visible when things lose their shimmer. Perception wakens, able to touch anew the line between reality and semblance. The real becomes legible, hence, through denuded objects.

Things shaped by Manila’s bourgeois longings are no different. These include places enjoyed and used by them or lodged with their desires – not just any street but one that serves privileged folks; not just any footbridge but the one we dreamily cross.

Today, however, these passageways have not been spared the crises that stem from modernity’s unregulated growth. They, too, have become places of decay. How are these places to be renewed if the people do not claim them collectively?

In a proper city, the collective space of roads, sidewalks, and bridges carries an entire community’s dream of moving up in the world. Quite literally, it mobilizes ordinary human wishes. It translates them into political demand. And it makes room for the reply apt to such demand.

The proper city is a just one. If the city meets its citizens’ demands, they are less likely to resent having their comings-and-goings closely watched. Block the desire for movement or ignore demand – and the city dims with frustration and possibly, revolt.

On Katipunan, the heavy traffic lured my curious gaze. To be sure, this road does not look damaged. But the experience it offers nowadays is that of apoplectic stalling. At the level of felt experience, it is a ruined passage.

Katipunan made me think about the semblance of modern transport. It was being undone right there in the crush of vehicles. It was, after all, the bourgeois wish for pure mobility that fueled the practice of owning multiple cars beyond practical need.

This desire for pure movement is continuous with another passion. It traffics in the wish to parcel the world into private assets. The result in Manila, ironically, is disintegrated mobility. And heavy traffic is its symptom.

While I was musing on the passerelle, however, what eluded me was that the public space I was standing on had no proper roof. The bridge’s cover was torn in places. 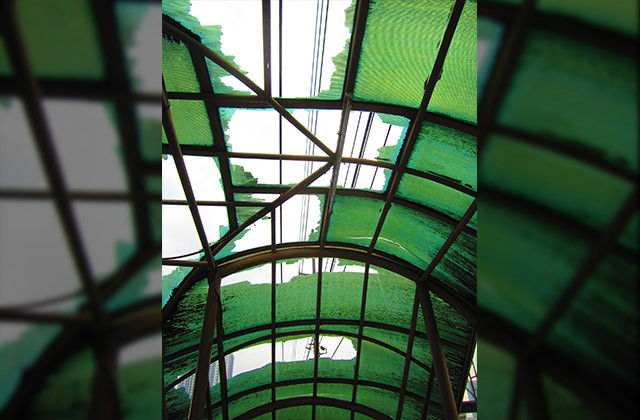 Then it rained. And I had no umbrella. Rain poured as if to impose on “all walks of life” questions of city-dwelling: Who are the pedestrians? Have they ever been mobile? Has Manila ever had a truly ambulant culture? If not, then what ends have the spaces for the people served all along?

Before I could carry on with my theoretic pose, the line between semblance and reality had already eroded. The caesura felt like a hole in my brain. Decayed thought seemed so achingly small I deemed it best to walk quickly off the bridge, into ruinous weather. – Rappler.com

John Labella, originally from Cebu, is an assistant professor at the Ateneo de Manila University. He earned his doctorate in English from Princeton. A scholar of modernist poetry and transnational American studies, John is also a poet.