Brazenly, Poe, her mother the actress—as well as the Senator’s attackers—all manipulate the flow of discussion to the legal technicalities of the citizenship and residency issues against her. They have thus far deflected the bigger questions about the Senator’s ethical character.

Brazenly, the INC manipulates the flow of discussion to the principle of separation of church and state. By twisting the principle to mean its opposite (that churches should be sealed off from the law), the church deflects the bigger questions about its long history of political brokerage.

Both are shameless, graceless spinmeisters. Or employ expensive ones.

Both use drama to fan sentiment and muffle thinking around their display of righteous indignation.

They are wrong. The public can divine spin.

As another generation used to say: Pang-FAMAS ang acting.

When INC refuses inquiry into possible institutional corruption by turning a constitutional principle on its head and painting itself the injured party of a state that will not let them be, takes on and milks the victim/kawawa role.

The kawawa position of course plays to populist politics. The appeal for emotional and political support against enemies whom they portray as brutal – is of course pure cynicism.

And it is a cynical Poe who purloins the moral aura of Jesse Robredo by, again, saying that technically-speaking, the issue of citizenship against both are the same.

So it needs reiterating: Jesse Robredo did not renounce Filipino citizenship.

The question Poe needs to answer is why she renounced Philippine citizenship.

Why she has not made a public statement about the citizenship of her husband and children.

Why she vowed allegiance to the American flag. 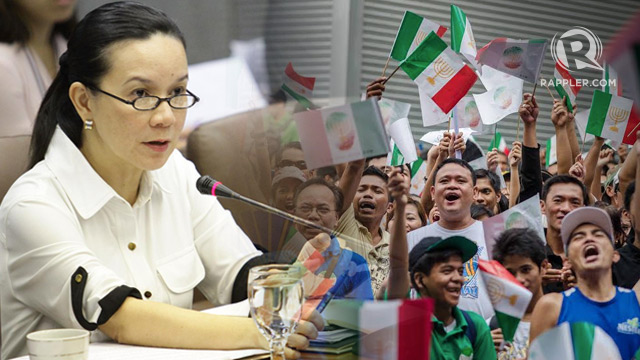 And those who are salivating after Grace’s political potential need to ask her to spell out how a former American will embody and act on the Philippines’ sovereign interests, without going back to the 1950’s Sampaguita Pictures all-too-American perspective of the world.

The victim position suits INC at the moment, facilitating its projection in the public mind of an authoritarian State that will not allow them religious freedom. Demanding that the principle of separation of church and state be interpreted as protection from criminal investigation and possible prosecution, INC refuses to acknowledge its location in a secular state.

(Those people are only defending their faith. We respect that, and we should also respect their rights.)

But the INC is defending the belief — kanilang paniniwala — that matters internal to the Church should be beyond the law.

How can a senator of the land “respect” the right to be beyond the law? This is the transactional reasoning of a woman who thinks citizenship is a dress to be put on or discarded according to opportunity.

The postcolonial choice to have multiple allegiances and identities belongs to those who will not seek to be top leader of a nation. Top positions require a lifetime of unwavering commitment to that nation. Thus, the constitutional provisos on residency for candidates for public office — provisos which were written not merely as technical hoops but as expression of a political ethos that defines the nation.

Neither gets a free pass out of demonstrating faith in a precise moral compass, guiding their actions. They are not allowed to dodge serious questions about how they interpret the Constitution.

The twisting of reason for political effect is the province of spin doctors. Stepping up to the light of the highest ethical standards is the domain of leaders of the separate domains of church and state.

The separation of church and state, which was in place in the 1898 Philippine Constitution, and which has thus made the Philippines the earliest social experiment in democracy in Asia, is not to be worn as though a dress to be put on or discarded, inside-out or outside-in according to opportunity.

Opportunism —especially for the purpose of rabble rousing — is not acceptable.

To submit to criminal investigation and possible prosecution by the Department of Justice (DOJ) IS the expression of separation of Church and State. Otherwise it is Fundamentalism.

To submit to a public call for evidence of ethical political thought that reasons ably about the role of citizenship in the quest for the presidency, IS the question to be answered. Otherwise it is showbiz. – Rappler.com

Marian Pastor Roces is a Cultural Studies scholar, an institutional critic, and curator.