Oct 16, 2015 1:41 PM PHT
Facebook Twitter Copy URL
Copied
To actively erase Martial Law from our past by installing the chief advocate of its whitewash in such close proximity to the presidency? #NeverAgain. The title of this opinion piece pretty much sums up what I think of Mr Yap’s article. I could leave it at that and call it a day, but there are many things Mr Yap brings up in his article that are in desperate need of addressing.

“The answer is simple, provided that you have the intellectual capacity and the maturity to look at it objectively.”

First off, this is really just a cheap self-serving trick to make the arguments that he is presenting appear as “intellectual,” “mature,” and “objective.” Characterizing arguments as such does not automatically make them so, just as characterizing netizen reactions as “crazy” does not make them so.

Second, an argument is only as good as how well it’s founded on facts and evidence. And while Mr Yap provides us with many facts, he leaves out quite a bit of facts and evidence that severely weigh against his proposition.

“Situate the analysis of his accomplishments in a vacuum and assess it objectively.”

That is a glaring problem right there. No person acts within a vacuum. Least of all a son of a dictator who, by his statements and actions, has shown us that he is interested in one thing: sanitizing the name of his father and that of his family. We shall see more of this later.

“Take a look at but a small sample of what he has done in the 16th Congress alone.”

I find it bizarre that Mr Yap would point to pending bills as “achievements,” when Marcos Jr has, in fact, authored and passed a law – the one postponing the SK elections. Perhaps, the idea of depriving the youth of their representation in local government doesn’t ring quite as loudly as the subjects of Marcos Jr’s other pending bills? Perhaps this is the same reason that Mr Yap left out the fact that Marcos Jr is one of the co-authors of the much-maligned Cybercrime Prevention Act?

“Basically, most any argument that would be hurled against Senator Marcos would be ad hominem.”

“Let’s preface the discussion with the hashtag #neveragain. What does this mean? It’s not a complete sentence. It’s a phrase. Let’s fill in the blanks.”

What comes after this sentence is long and winding conjecture, with Mr Yap setting up a Straw Man that he can beat into helpless submission – as is often done to Straw Men.

Since Mr Yap does not appear to understand what #NeverAgain means, I’ll spell it out for him. But first, let me preface this discussion with some of the many non-ad-hominem arguments that can be hurled against Marcos Jr.

In 1985, at 26 years old, Marcos Jr sat as chairman of the board of the Philippine Communications Satellite Corporation (Philcomsat), receiving a monthly salary of anywhere between $9,700 to $97,000.

Sources of a United Press International reporter said that Marcos Jr had no duties in Philcomsat and rarely even went to their office. In 1986, Philippine government auditors would discover that Philcomsat was one of many corporations and organizations used to siphon ill-gotten wealth out of the country.

On June 5, 1986, the Supreme Court created a three-justice commission to hear evidence pertaining to the railroading by the Sandiganbayan of the murder case of Ninoy Aquino Jr, against the supposed gunman Rolando Galman.

The Court would later adopt the findings of this commission, asserting that its “findings and conclusions are duly substantiated by the evidence and facts of public record.” One such finding is that a principal witness, Rebecca Quijano, was offered a P2-million bribe, supposedly coming from Marcos Jr and offered through Mayor Rudy Fariñas and William Fariñas.

Both of these facts are matters of public record, and they are undisputed. I will let these facts speak for themselves.

Marcos Jr lied about having an Oxford degree – not once, but twice: first, when he claimed such degree in his credentials as posted in his profile on the official Senate website, and second, when he denied a Rappler report that had looked into the matter. Marcos Jr would later amend his Senate website credentials as a quiet acknowledgment of the veracity of the Rappler exposé.

Marcos Jr also lied about his family’s ill-gotten wealth. In the 2003 case of Republic v. Sandiganbayan, the Court observed that, “[s]ince 1991, when the petition for forfeiture was first filed, up to the present, all respondents have offered are foxy responses like lack of sufficient knowledge or lack of privity, or they cannot recall because it happened a long time ago or, as to Mrs Marcos, the funds were lawfully acquired. But whenever it suits them, they also claim ownership of 90% of the funds and allege that only 10% belongs to the Marcos estate. It has been an incredible charade from beginning to end.” 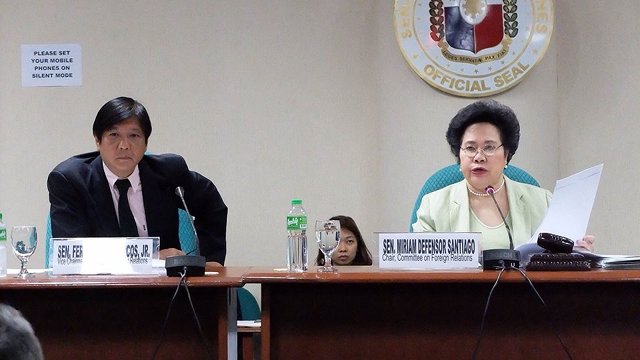 In other words, Ferdinand “Bongbong” Marcos Jr cannot even acknowledge, much less admit, verifiable historical facts. Especially when it comes to the shameful legacy of his father and the complicity of his family.

So when we say #NeverAgain, it is not for the Straw Man argument that Mr Yap creates.

We say #NeverAgain to ever putting a Marcos back in Malacañang – and that includes placing him within a heartbeat of the presidency.

We say this because we are aware that Marcos Jr’s primary interest is sanitizing his family’s name and his father’s legacy. We understand that whatever Marcos Jr does – whether in his personal acts or in government – is geared precisely towards that end. And we reasonably predict that if Marcos Jr should ever be in a position to do so, he will not hesitate to whitewash his family’s past, and leave his father’s victims out in the cold.

It is bad enough that the administrations and generations that followed Martial Law and the EDSA revolution were negligent, and failed to educate the next generation about the Marcos regime: the atrocities committed during Martial Law, and the pernicious, lasting effects of the Marcos regime on our country.

Negligence is one thing. But to actively erase Martial Law from our past by installing the chief advocate of its whitewash in such close proximity to the presidency? #NeverAgain.

The answer is: he is not. – Rappler.com

Juan G. M. Ragragio is a thirty-something-year-old nerd/geek hybrid who blogs at raggster.wordpress.com and tweets at twitter.com/raggster. When not online, he either attends law school at the University of the Philippines College of Law or stays home inventing new ways to use chicken noodle soup.