Facebook Twitter Copy URL
Copied
While reducing carbon emissions is a step in the right direction, many see a transition to 100% renewable energy as the solution to climate change

Climate change is one of the core issues of our generation, cutting across demographics, cultures, gender, and religion. This weekend, thousands of people from all walks of life will be marching to the streets, in cities across the globe to urge world leaders to take serious action on climate change.

These climate marches will take place a few days before the 21st Conference of Parties (COP21) of the United Nations Framework Convention on Climate Change begins in Paris.

From Manila to Madrid, from Sao Paulo to San Francisco, thousands will be mobilized to demand from their own governments a transition to renewable energy (RE).

Saturday, November 28, will see thousands of Filipinos taking part in the March for Climate Justice Pilipinas with members from different civil society organizations, NGOs, the academe, religious and indigenous groups. 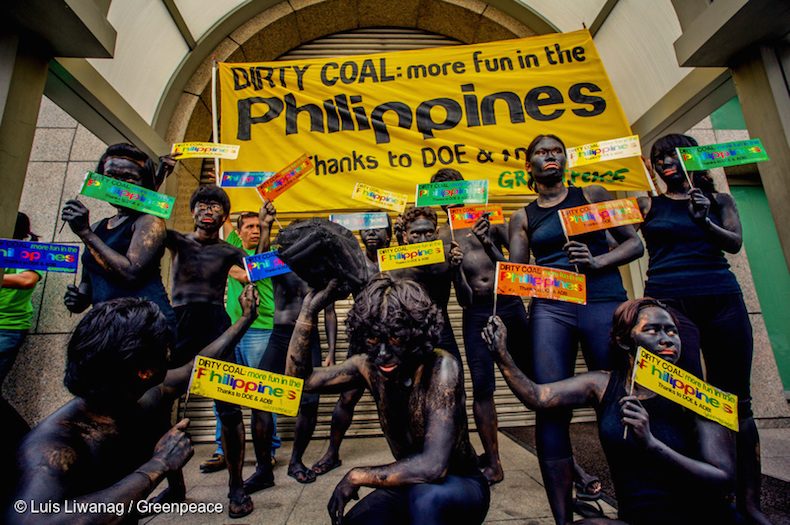 The burning truth – about how dirty fossil fuels like coal and oil remain as the top sources of climate-destructive greenhouse gas emissions, despite the undeniable fact that there is vast potential in RE sources like solar and wind – is causing an uproar.

Calling for a fair, ambitious and binding agreement at the climate conference is just a step in the right direction – to reclaim power from the fossil fuel industry giants that have continuously denied the scientific truth about climate change, even lobbied with politicians and funded organizations to mislead the public by saying that climate change is a hoax.

One thing they can’t deny is the fact that their dirty business has been exposed and that their time is running out. People have now seen how clean renewable energy can power the world, saving us from further effects of climate change.

In September, Greenpeace International published its latest Energy [R]evolution scenario. The report shows how we can already transform our energy supply by switching to renewables, which would mean a stabilization of global carbon dioxide emissions by 2020. In effect, this could mean bringing down emissions to near zero by 2050.

The report also states that a 100% renewable energy scenario will not only create jobs in the energy industry – nearly 20 million over the next 15 years – but the investment required is more than paid for by savings on future fuel costs. People know that a just transition to 100% renewable energy will be able to power every community, every city, and every country around the world— just what is needed to stop the onslaught of climate change impacts.

The transition to 100% renewable energy has started. Almost everywhere, you’ll find solar and wind installations – from household solar rooftops to large-scale integrated wind and solar farms – all starting to deliver clean and sustainable electricity to thousands of homes and businesses.

In the same Energy [R]evolution scenario cited above, it is reported that in 2014, renewables contributed to 60% of new power generation worldwide. This is proof that the renewable energy sector is transforming power generation. This expansion also means that solar PV and wind power is now cost-competitive with coal in most regions around the world.

There is also growing support for 100% renewables. More scientists, engineers, and development workers support the view that a 100% renewable energy future is not only achievable, but essential.

In varying levels, 164 countries have targets for renewable electricity, with some cities and communities going for a 100% renewable energy target, from Fukushima, Japan to Maui County in Hawaii.

TIME magazine and The Guardian reported in April that Costa Rica was powered by 100% renewable energy for the first 75 days of 2015. Thanks to the country’s abundant hydropower and geothermal resources and its government’s commitment to curb carbon emissions, it is expected to rely on renewable energy for around 95% of its total electricity consumption this year. Whether it’s a Greenpeace Energy [R]evolution report, images on social media about a solar-powered airport in India, or news reports about the Philippines building the largest solar and wind farms in Southeast Asia, there are renewable energy champions that carry this message of a clean and green future.

Now is the time for a just transition to 100% renewable energy. The March for Climate Justice Pilipinas happening this weekend, and other simultaneous marches elsewhere, hopes to highlight this point to every country and city where the sun shines and the wind blows.

There are no major economic or technical barriers for the world to move towards 100% renewable energy by 2050. It only requires political will to make the change. – Rappler.com

Reuben Muni is the Climate and Energy Campaigner for Greenpeace Philippines.