Mar 21, 2016 8:18 PM PHT
Facebook Twitter Copy URL
Copied
Is this the type of climate leadership that the Philippines deserves from its next president? The Philippines has been at the center of the global war to save our planet over the past year. Just last December, the country was recognized as a major player in the negotiations at COP21 that led to a worldwide agreement to cut down greenhouse gas emissions.

With the national and local elections looming in May, the preparedness of the Philippines to become a climate-resilient nation committed to clean energy and environmental protection was bound to be a major issue.

Yet after 4 hours of waiting then watching, the debate was hopeless. It was a waste of time. I just saw 4 candidates bickering and insulting each other as if the debate were a primetime television drama. (READ: #PHVote: Advocates dismayed at presidential bets’ ‘catfight’ over coal)

It is disheartening to see that the men and women who are supposedly representing the best interests of their country do not understand the significance of our fight against climate change. For every outdated law and wrong scientific information mentioned by the candidates to support their agenda, a little part of every environmentalist in the country died.

It was painful to hear Mayor Rodrigo Duterte completely missing the point of the country’s commitment to reduce its carbon dioxide emissions. It was a slap to the face of the Philippine delegation for COP21. These men and women who endured sleepless nights arguing over words with other nations to finalize a historic global agreement have the right to be fearful of the direction of a national government under a leader with such a limited perspective on the big picture of the climate crisis.

It was extremely disappointing to see Vice President Jejomar Binay spending his time veering away from every issue discussed during the debate and turning it into a personal bombardment of accusations against his opponents. Not once did he mention anything related to climate change. 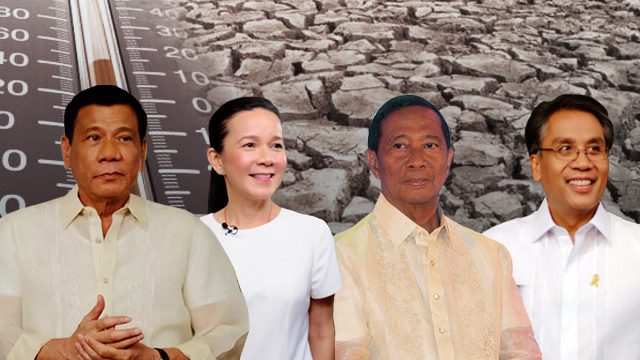 In contrast, administration standard-bearer Mar Roxas actually took time to discuss his agenda. He vowed to repeal monopolies in the energy sector to promote competition, and encourage local and foreign investors to support the construction and maintenance of plants powered by clean, renewable energy. He also promised to provide incentives for entrepreneurs and businessmen who will invest in natural gas, geothermal energy, and hydroelectricity.

However, he failed to explain the conflicting stances of the Aquino administration, which committed to the Paris agreement but allowed the construction of 25 coal-fired power plants in the country. If we take his word of continuing “Daang Matuwid,” it looks like that path may not be one powered by clean energy.

Senator Grace Poe’s stance on climate change and disaster risk preparedness was already the most satisfying, but it was still not clear enough. While mentioning similar opinions with Roxas and Duterte about repealing monopolies to lower the price of renewable energy, she also emphasized the need for a proper framework for implementation of national environmental laws.

Poe promised the establishment and protection of marine sanctuaries for sustainable fishing. She also plans to support drought-affected areas by promoting plantations of drought-resistant crops and the construction of dams and flood control projects, especially in the southern Philippines. It remains to be seen, however, if the neophyte senator has the political will and capability of fulfilling these promises given her limited experience.

While I listened to the stand of each candidate on climate change, I began to lose hope. Questions began racing through my head. Is this the type of leadership that the Filipino nation deserves from its next president? Do we need to have another Ondoy or Yolanda before candidates finally recognize the need to prioritize climate change and environmental preservation?

I cannot bear the thought of another reactionary approach to this issue, in which our leaders only care about it when they themselves are affected by the dilemma. It will put an even bigger roadblock to an already tall order for each of us to fight for the future of our children and the next generations.

One thing became painfully clear throughout the debate: neither environmental protection nor climate change will be a top priority for our next president. Instead of our next president leading us to a greener, more sustainable future, it looks like it is us who should lead them to a better path. – Rappler.com