Throughout the season of Lent, my family and I are in solemn religious observance, especially during the Holy Week. We are faithful Roman Catholics. Every year, we choose to stay at home, prepare kakanin (native delicacies), reflect, pray, and attend Mass.

This year, however, was different. I deviated from a family tradition passed on from generation to generation.

Instead of staying with my family, I decided to immerse myself from March 24 to 27 at “Kampohan,” a so-called “bakwit camp” sheltering the Lumad. Located in front of the Bukidnon Provincial Capitol, the camp has been there since January 21 this year.

A “bakwit camp” refers to an evacuation area where displaced individuals find temporary refuge. For now, “Kampohan” is home to communities fleeing the conflict between paramilitary groups and the New People’s Army (NPA) in Cabanglasan, Bukidnon. (READ: TIMELINE: Attacks on the Lumad of Mindanao) 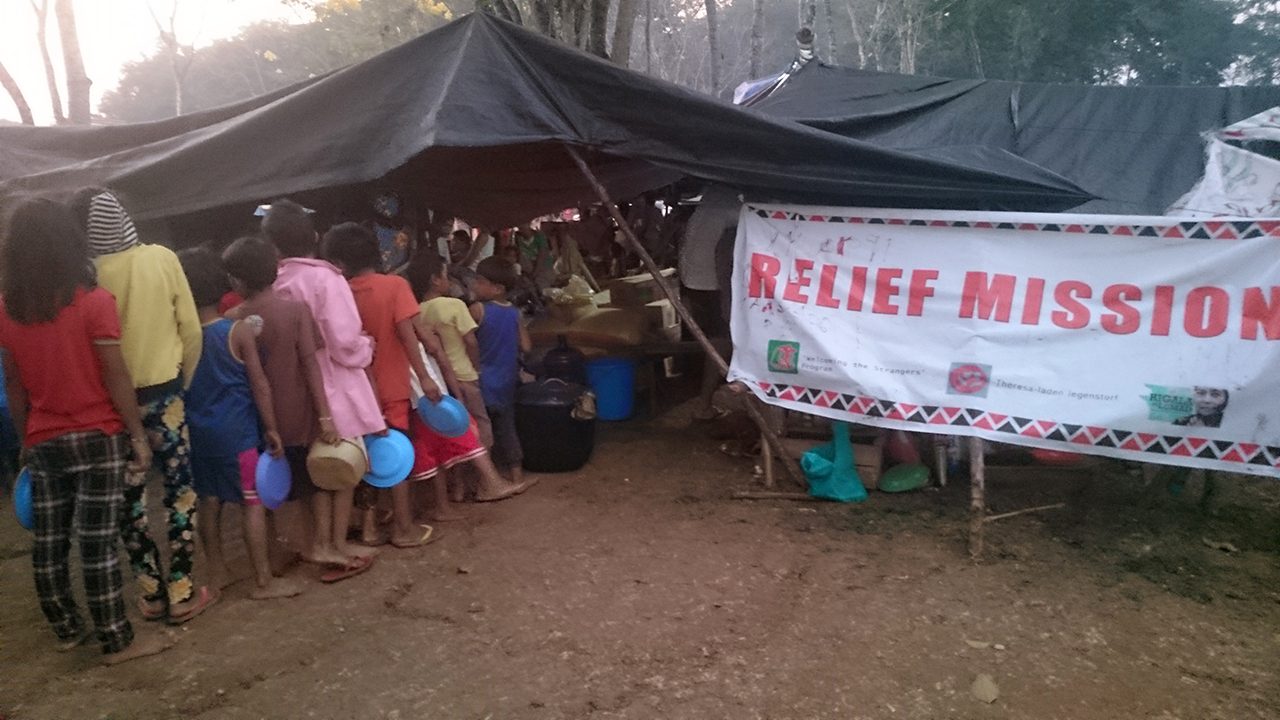 Living with the Lumad

Since it is a Jubilee Year of Mercy for Roman Catholics, I found it relevant to live with the marginalized to extend mercy and compassion to them.

I could not help but wonder what it was like to be in their place, to experience the same hardships, considering I live in the same region.

I told my relatives about this idea. They were initially worried because the bakwits (evacuees) are being tagged as members of the NPA, but they still supported my plan.

I started my immersion during Maundy Thursday. I was welcomed by 67 families from the Talaandig, Higaunon, and Umayamnon tribes. These tribes are part of the 7 tribes of Bukidnon, which are collectively called the Lumad. (READ: Human Rights Watch: Heads should roll over attacks on Lumad)

On my first night, community leaders and volunteers asked me to share a bit about myself and my reasons for visiting the camp. I tried greeting them using their language, Binukid, to let them feel I am one with them and willing to be part of the community.

The situation at the camp was devastating.

The water was not safe to drink, with the evacuees fetching water from unsanitary sources such as public faucets in the area.

The back of the provincial capitol and the open space of the People’s Ecological Park served as makeshift comfort rooms.

Because of these conditions, a number of bakwits suffer from skin disease, cough, colds, and other illnesses.

There are 3 newborn babies there facing health risks due to the camp’s deplorable state. I also met a 6-year-old boy who had difficulty breathing.

The community’s leader had to be rushed to the hospital as well due to amoebiasis. I felt helpless because the community was dependent on her leadership.

Despite these miserable conditions, however, there remains a sense of dignity among the evacuees.

One child, for example, handed me the star apple she just harvested, as if hunger did not bother her. During mealtime, they always prioritized me and made sure I had food to eat. They showed that they were grateful for my presence and were generous with their smiles and stories.

All of these gestures of kindess led me to cry in silence. I was in a better position to give, I was the one with a more comfortable life, and yet I was the recipient of their care. I am a sociologist by training. We are taught to always engage broader communities and not just stay in an ivory tower. It was not my first time to go on immersion but my experience with the Lumad was particularly memorable because it taught me to become simple, grateful, understanding, and above all, to be compassionate.

The experience made me discover many things I often taken for granted. Sometimes, as a young university instructor struggling to complete my master’s degree, I become apathetic and self-centered.

I find it ironic that in an era where being “connected” is so easy through social media and digital technology, my bakwit camp experience made me realize that we are, in reality, so disconnected from each other.

Not a lot of people are concerned with the issue of displacement. People in Malaybalay easily turn a blind eye to the bakwit camp. Tagging the Lumad as members of the NPA makes it easy to dismiss them as undeserving of state support. (READ: Walking with the Lumad)

Experiencing their struggle firsthand can change the way we view the Lumad.

The community is still demanding justice for their members who were allegedly killed by paramilitary groups. They still want to go back to their homes, but are threatened by the atrocities of trench warfare. I met a 9-year-old boy who was shot 9 times and survived.

This struggling community is no different from us. Their struggles might also be our struggles. These communities were once living in peace in Balaudo (Talaandig), St Peter (Higaunon), and Indalasa (Umayamnon) in Bukidnon, but because of armed conflict, they were uprooted.

Life in the margins is fragile. It is the responsibility of those better off to extend compassion beyond rhetoric and find ways to make things better. – Rappler.com

Jade Harley Bretaña is a part-time teacher at Bukidnon State University, a volunteer DJ/broadcaster at the university’s DXBU 104.5 MHz radio station, and a postgraduate Sociology student at the Mindanao State University – Iligan Institute of Technology.