Dear next president: PH roads are death traps, how will you make them safe? 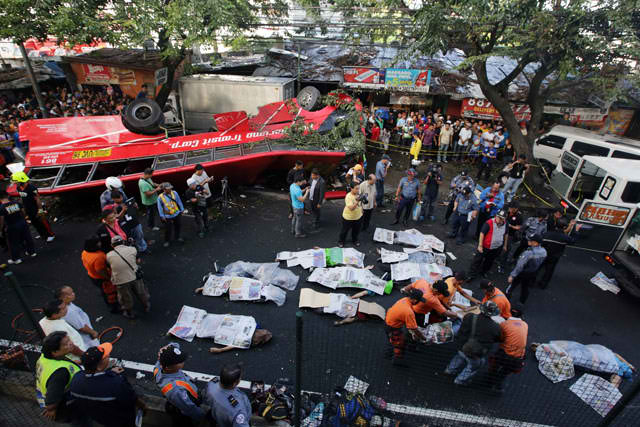 They had their whole lives ahead of them: graduations, college, careers. But everything ended in a fiery crash on a road in Tagaytay in the wee hours of January 17, 2016.

It started as a joyride. According to news reports, the youngsters were in a car driven by Calabines, who had a student license. It was his father’s car; the boy reportedly took it without his parent’s permission. The car hit a concrete barrier and several trees before bursting into flames. All 6 teenagers died in the horrific crash.

The high costs of road carnage

It’s high time that the CEO of our country made road safety a development priority. Road crashes take a heavy toll on our society and economy.

When the poor get hurt in a road crash, they seek medical attention in public hospitals. These injuries place a huge burden on health care services. In general, public hospitals in the Philippines shoulder an average of 25 to 75% of the victims‘ total costs of medication and treatment.

Ricardo Sigua heads the road safety research lab at the University of the Philippines National Center for Transportation Studies (UP NCTS). He estimated that 2.6% of our gross domestic product (GDP) is lost due to road crashes. In 2004, that loss amounted to P105.2 billion.

In 2015, the Philippines had an estimated GDP of P15.1 trillion. Please do the math. 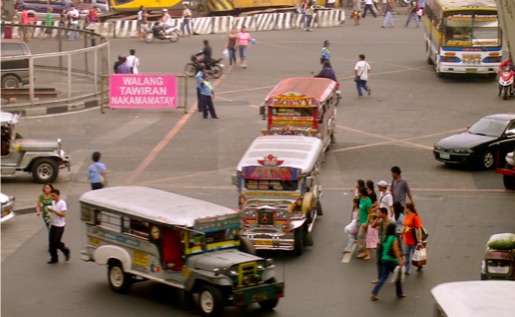 Calling on the 5 candidates running for president! Please answer the following questions:

1. What infrastructure will you build to keep pedestrians safe?

Walking in Metro Manila is no walk in the park. The sidewalks are narrow. Vendors and motor vehicles often encroach on what little space there is. The footbridges are often steep, unfriendly, and inconveniently located.

As a result, walking in the megacity can be fatal. More than 57,877 persons on foot were injured or killed in Metro Manila from 2005 to 2015, said Thinking Machines. “Pedestrians made up 46.2% of Metro Manila’s 4,024 road fatalities since 2005,” said the data science consultancy.

2. Will you build protected bicycle lanes?

Two-wheeled travel can be deadly in Metro Manila: Crashes involving bicycles are over seven times more likely to result in death or injury than car crashes, reports Thinking Machines. According to MMDA data, from 2005 to 2013, 1,127 people on bicycles died in crashes. That comes out to 125 deaths per year.

Clearly, bicycles and motor vehicles don’t mix. Protected bike lanes are physically separated lanes that are exclusively for people on bicycles. These lanes will keep them alive and make the roads safer for everyone.

3. How will you make public transit safe?

Eight out of 10 people in Metro Manila ride public transit. That figure includes children, the elderly, and persons with disability.

Yet much of public transit in the country is unsafe. An MRT-3 train was derailed in 2014. Two LRT-1 trains collided in 2015.

Buses regularly figure in road crashes. According to a study from UP NCTS, the people who ride public buses are 6 times more at risk of being in a road crash than are private car passengers. Bus passengers are 5 times more likely to be in a crash than are riders of jeeps and UV express service vehicles.

4. How will you improve road safety laws and their enforcement?

5. How will you make motor vehicles safer?

It’s time for drivers to stop claiming that their vehicles “lost brakes.” All vehicles should pass basic safety standards. They should include safety features, such as seat belts, front-impact regulations, and electric stability control, said Etienne Krug, head of WHO’s disability, violence and injury prevention unit.

6. How will you enhance post-crash response?

Further enhancing trauma care systems will guarantee the prompt treatment of those with life-threatening injuries, said the WHO. The bereaved, on the other hand, will need emotional and legal support as they attend investigations and court hearings.

7. How will you ensure that the country meets its goal of halving road traffic fatalities by 2020?

In 2015, the Philippines joined member states of the United Nations in adopting the 17 sustainable development goals (SDGs). Road safety targets are included in the SDGs:

“By 2020, halve the number of global deaths and injuries from road traffic accidents.”

“By 2030, provide access to safe, affordable, accessible and sustainable transport systems for all, improving road safety, notably by expanding public transport, with special attention to the needs of those in vulnerable situations, women, children, persons with disabilities and older persons”

8. What will you personally do to make our nation’s roads safe?

Road safety is everyone’s business. Still, you, as the country’s leader, will have a big role to play.

“Political will is needed at the highest level of government to ensure appropriate road safety legislation and stringent enforcement of laws by which we all need to abide,” said WHO Director-General Dr. Margaret Chan.

Take heart, dear next leader. Road crash injuries and deaths can be prevented.

And investments in road safety in developing countries, like the Philippines, can be very cost-effective. According to the Asian Development Bank, “some studies suggest that spending 10% of the current costs of road crashes on safety may prevent 70% of those costs in future.”

Just think: Spending 10% of the P394.6 billion lost from the country’s GDP due to road crashes may save 70% of that huge sum. Imagine investing P39.4 billion in life-saving laws and infrastructure. See in your mind’s eye all the lives that can be saved. And picture all the schools, mass transit systems, parks, and feeding programs that can be funded with the billions of pesos saved.

Dear next president, what will you do to make #SafeRoadsPH a reality during your watch? – Rappler.com

This story was produced under the Bloomberg Initiative-Global Road Safety Media Fellowship implemented by the World Health Organization, the Department of Transportation and Communication, and VERA Files.