The country needs a strong leader.

Not surprisingly, there’s no economic crisis on the list; simply because the fundamentals of the country’s economy are quite stable, thanks to the management of the Aquino administration, although inclusive growth remains still far away. (READ: 4 urgent economic concerns for Aquino’s successor)

But this does not halt some politically interested folks like Senator Koko Pimentel or ex-governor Manny Piñol in pushing for an authoritarian-like type of leadership. This time we need a president from Mindanao who knows the problem of Mindanao, they said.

‘This nation can be great again’

Because the picture is bleak, we need a strong man who can unite the country, and “march together toward the dream of greatness.” Because “this nation can be great again.”

No, that’s not Donald Trump’s original line; that was the late dictator Ferdinand Marcos’ line in his inaugural address in 1965 titled, “Mandate for Greatness.” Marcos was from Ilocos.

What the country needs is strong leadership. Leadership that is willing to kill. Because if you are afraid to do so, you are weak. (READ: Top Philippine candidate pushes ‘kill criminals’ message)

We’re talking not about Mindanao or Ilocos, but about the entire Philippines, and the kind of leadership that Rodrigo Duterte offers.

His political rivals are “bayot” or gay, weak, corrupt, inexperienced, and inefficient, so he must be the alpha male, the macho leader, and the last card on the deck, the last hope Filipino voters could cling to.

Flirting with authoritarianism is not uniquely Filipino despite us suffering from the hands of a strong man for two decades.

The United States, as evidenced by the rise of Donald Trump in the Republican party, also flirted with the need for strong leadership, painting the presidency of Barack Obama weak. In Britain, the Conservatives want David Cameron to appear strong, criticizing the Labour leadership for being spineless.

While Singapore had relative “success” in its experiment with iron hand leadership, the strong man myth has largely done bad than good in Southeast Asia. Cambodia remains virtually under the strong man rule of Hun Sen, and Myanmar is still struggling in its transition to democracy after its break from the junta. 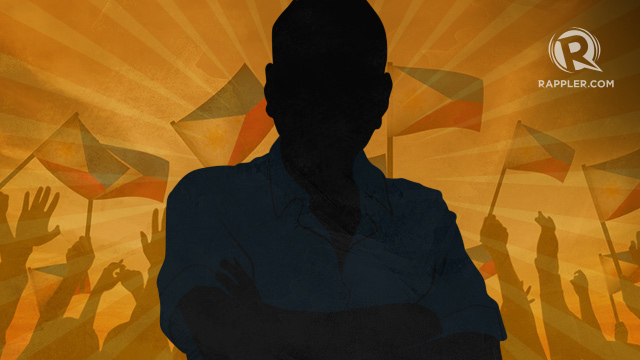 When the Philippines slept with a strong man, it was a disaster. Economic data during the Marcos years were depressing. Growth in economy was illusory, and peace and order was only on the surface. (READ: Marcos years marked ‘golden age’ of PH economy? Look at the data)

Beneath the smiles and pomposity of Imelda was another layer of reality – fear, confusion, insecurity, poverty, and suppressed dissent. At the bottom was massive suffering of the people from poverty that it took decades to get the country’s derailed economy back on track.

It was democracy that brought the world unprecedented economic progress and a much improved well-being of many people.

The past few weeks provide us a glimpse of what the Philippines would look like after the national elections on May 9, 2016.

Duterte is polling at 30%, making him likely to win the presidency over his rivals Grace Poe, Jejomar Binay, Mar Roxas, and Miriam Defensor-Santiago.

Along with polling numbers comes the chilling, ambitious plan to crackdown on criminality and illegal drugs, promising to “suppress” them in 3 to 6 months. The term “suppress” is a downgrade from an earlier term they used” “eradicate.”

Senator Juan Ponce Enrile, a former Marcos defense minister, gave advice on how to make Duterte’s promise a reality. He sure knows what he’s talking about from his years of experience as a member of the “Rolex 12” and as one of the architects of Martial Law.

His suggestion is predictably simple: it is only by declaring martial law can illegal drugs and criminality be eliminated in the 3-6-month timeframe. Duterte has to mobilize the country’s armed forces, the police, and the NBI to do the job.

True enough. When he was repeatedly challenged about his ambitious campaign promise, Duterte provided a vague plan that more or less will be the template of his administration.

The plan is close enough to martial law: declare illegal drugs a national security threat, mobilize two divisions of the army, double the salary of police officers, and give them the order to kill suspects when they resist with violence.

As for the economy, his proposal rests on prioritizing peace and order and there will be economic stability as more investors will come in. With China and the disputed islands in the West Philippine Sea, his statements are convoluted but he will agree to holding bilateral talks.

But when asked again in the light of the Chinese military buildup in the Spratlys and Scarborough Shoal, he wants American help and will continue to pursue government’s call for multilateral negotiations and legal arbitration at the international court. (READ: China and next PH president: Tough to push ‘reset’ button)

In retrospect, Duterte has a proposal pretty much similar to that of the late dictator. Accordingly, the state must impose discipline on its citizens, and there must be peace and order.

Marcos waged war against illegal drugs and rising criminality and against the communists, the latter of which he used as justification to declare martial law in 1972, declaring them a threat to national security.

While staying friendly with the US – because he’s milking the Americans of dollars for his political and self-interest – Marcos positioned himself closer to the Soviets and to China. The only slight difference is that Duterte is proud to call himself the “first president coming from the Left,” and that he’s friendly to the communists but has labeled himself more of a socialist.

The question is: will he pursue martial law to root out criminality and illegal drugs as national security threat?

Most likely Congress will oppose such a move, but still, that remains to be seen. In many of his stump speeches Duterte insinuated he would abolish Congress and push for his advocacy of federalism.

But as the temperature of the campaign period increases, he shows erratic temperament – from Trumpishly insulting his political rivals to the level of vulgarity he displayed in public with the sorry extension of a sick rape joke. Such behavior is unbecoming of a head of a democratic state, and more of a trait of an authoritarian.

Just as Marcos had loyalists who, until now, remain loyal, and are the same loyalists pushing for the vice presidency of Ferdinand Marcos Jr, Duterte has also developed an army of fanatic supporters despite the fact that in his more than 20 years as mayor of Davao, criminality and illegal drugs have remained a problem in the city. Admittedly though, there’s a vast improvement from where it was in the late 1980s.

Irritated by Roxas’ challenge about his brand of justice, Duterte declared, although chillingly, “That’s the problem. If you don’t know how to kill and you’re afraid to be killed, you cannot be president.” That was during their debate in Cebu, and his supporters in the audience cheered.

On social media, Duterte’s supporters are the loudest, hurling insults and threats against those who hold opinions critical of their beloved idol. But when asked about the details of his campaign platform, these Internet trolls are insufferably ignorant about political processes, and about how government works.

All they spout are the sloganeering and the belief that Duterte will end the corrupt, kill the criminals, and transform the entire country into a Davao City.

However, it would be very convenient to only point out criticisms against the possibility of an authoritarian rule under a Duterte presidency. We have to recognize that there are conditions that give rise to the need for a strong man.

There are cleavages in our political process and government system that invite padding for instantaneous results.

One of them is the people’s growing impatience at the slowness of democratic political processes and the existence of loopholes in the bureaucracy. Implementing a government project goes through several layers of bureaucracy.

In the administration’s desire to rid the government of corruption, for example, bidding on major infrastructure projects is painstakingly slow. For over 5 years, only a handful of public-private partnership projects have been implemented and completed.

Another is fear and insecurity due to threat from petty and organized crimes. Criminality’s rise exposes the weaknesses of a police force that’s paralyzed by protocol. You have to prove guilt beyond reasonable doubt for the suspect of a crime to be sentenced.

This is a loophole that the politically savvy strong man can easily exploit: slow justice creates a cleavage that demands a more drastic solution to end criminality, a fast-paced solution that undermines processes and protocols.

The people’s anxiety and anger at government is fueled by politics, a term used pejoratively to refer to the perceived inefficiency of government, corruption, controversies, and political vendetta.

This leads to cynicism which is potent breeding ground for the strong man to develop his base – the masses – by giving them false hopes and promises impossible to keep.

Among the present crop of presidential aspirants only Duterte and Santiago appear to be not beholden to the country’s leading oligarchs. Mar Roxas, Grace Poe and Jejomar Binay have links to the Cojuangco family.

In a sense, the companies and corporations owned by a privileged few have provided jobs and developed communities, yet they are regarded with disdain by populists who want to rid the country of oligarchs.

Despite the country’s economic growth enjoyed by the elite, poverty remains a pressing issue that needs to be addressed. Duterte has vowed to dismantle the oligarchs; so did Marcos, except that he replaced the old elite with his cronies.

Democratic processes are consensus-driven where ideas are challenged without the fear of being silenced. But the process could drag and cause the implementation of government policies to take time. Proposals are tossed and debated upon, and even the conclusion remains debatable. In the implementation of government programs there is also oversight to ensure checks and balances.

By contrast, under authoritarian rule, the strong man proposes a policy and implements it right away without the benefit of deliberation. The strong man thrives in visible projects and programs, and under a Duterte leadership there is the risk of weakening the institutions that uphold democratic values, a risk that is not worth taking after that nightmarish experience of martial rule.

No matter how bleak the picture of our country is, the presidency is not all about providing instant solutions to long-term problems just to appease the voters; it is about strengthening democratic institutions of government to ensure long-term solutions and stability.

With his temperament and unbridled pronouncements that set the tone of his campaign, I don’t think Duterte possesses the qualities and sensibility of a democratic head of state.

Let’s stop flirting with a strong man when we have a principled person who has sincerity, democratic values, and the required quality to be president.

That person may come from the elite class but that person may be the only choice who presents a clearer, more credible platform of government that ensures democratic processes will be in place. – Rappler.com

Kelvene Requiroso is a concerned citizen from Cavite who is alarmed at the nasty tone of election campaigns. He can be reached through e-mail: krequiroso@yahoo.com.