Call for justice: Prevent a repeat of the Kidapawan bloodshed

Apr 26, 2016 7:45 PM PHT
Jade Harley Bretaña
Facebook Twitter Copy URL
Copied
'Now is the time to support each other, fight for what is right, and change society for the better'

Anxious, frightened, and alarmed – I felt these all at the same time as we passed the most critical area between the boundaries of Bukidnon and Cotabato around 7 pm last April 11.

I’ve known the area since I was a kid because I had lived in Damulog, the last municipality of Bukidnon before Carmen, Cotabato. Commuters are afraid to pass through after sunset because there have been attacks by communist insurgents in the area.

I was traveling with Dr Nimfa Bracamonte, my former professor, and some members of the Kabataan party list. Kabataan’s 3rd nominee Vennel Francis Danao Chenfoo, whom I met during my bakwit (evacuee) experience with the Lumad in Malaybalay City, invited me to visit the farmers affected by drought.

We wanted to display solidarity with the farmers. We also wanted to condemn the heartless government officials in Kidapawan who failed to address the farmers’ concerns, leading to their bloody dispersal on April 1. (READ: Kidapawan and the rice riots)

From Malaybalay City, Bukidnon, my home base, to Arakan, Cotabato, a neighboring town of Kidapawan and our destination, it took us more or less 10 hours to travel. We arrived almost midnight at a gymnasium in front of the Poblacion Barangay Hall, tired and hungry.

I saw a lot of people lying on the floor, and many were already sleeping. There were around 3,000 supporters from various places in Mindanao (Zamboanga, Iligan, Misamis Oriental, Bukidnon, Davao, and Soccsksargen) to attend the burials of the two protesters who had been killed.

My companions and I looked for space to sleep in the gymnasium. We only had several pieces of cardboards and tarpaulins as our makeshift sleeping mats.

The conditions inside the gym were heartbreaking. I could see how these people were already used to the situation. Only two public comfort rooms were available at the gym. There was no water supply, no blankets, no pillows, and no sleeping mats, but we all had to adjust if only to extend our support to the farmers, who were much more important. 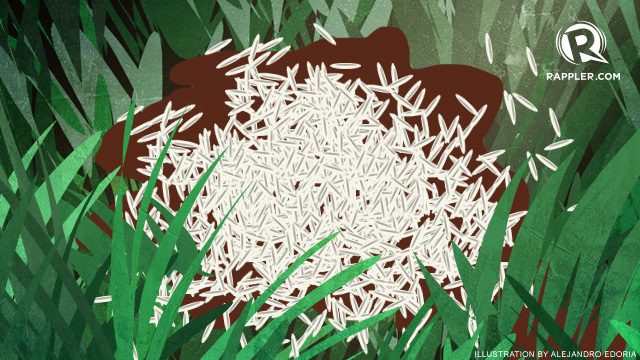 Our wake-up call was at 4 am. We traveled from Poblacion to Sitio Katindu, Barangay Malibatuan, to the home of 22-year-old Darwin Sulang, one of the protesters killed in Kidapawan.

As we arrived for the memorial service, I witnessed the mourning of Darwin’s family members. He was a security guard in Davao City and, on his rest day, would go home to Arakan to visit his family.

It was not his original plan to join the protest in Kidapawan. But he wished to help his family with transporting sacks of rice, in case government would proceed with the distribution.

But the shooting happened. Instead of rice, the farmers received bullets. (READ: Kidapawan protester: I was shot by sniper on firetruck)

These people were hungry, struggling to deal with a devastating drought. Who else could they turn to during desperate times? (READ: How climate change threatens our food security)

There will be a repeat of what happened in Kidapawan if the government cannot provide basic services and cannot protect its own citizens. Despite the government’s attempts to address poverty, farmers are still deprived of their fundamental human rights.

We join the cry of the oppressed against all forms of exploitation, unjust practices, and violations of human rights – issues which have massive impact on the stability of our nation.

The farmers now have a different call. They are not only asking for rice, but justice, too, for Darwin. (READ: Gov’t should be blamed for hunger, violence in Kidapawan – senators)

Now is the time to support each other, fight for what is right, and change society for the better. If not, the bloodshed will continue. Injustice will persist in different forms if we just stand in silence. – Rappler.com

Jade Harley Bretaña is a part-time teacher at Bukidnon State University, a volunteer DJ/broadcaster at the university’s DXBU 104.5 MHz radio station, and a postgraduate Sociology student at the Mindanao State University – Iligan Institute of Technology.