May 17, 2016 6:30 PM PHT
Renee Juliene Karunungan
Facebook Twitter Copy URL
Copied
As president, he will chair the Climate Change Commission, which mainly negotiates for the country at the United Nations

The Philippines has elected a new president whose slogan during his campaign was, “Change is coming.” But another change has come – climate change – something he seems to just easily brush off.

In the second round of debates held on March 20 in Cebu, then presidential candidate Rodrigo Duterte said, “The United Nations and all these [industrialized] countries are hypocrites.” This was in response to a question about how the country plans to implement its commitments to the United Nations Framework Convention on Climate Change (UNFCCC).

Last year, 196 countries signed a climate agreement in Paris. The Philippines submitted its own set of commitments, called the Nationally Determined Contribution (NDC). In its NDC, the Philippines set a target of 70% carbon mitigation by 2030.

The Philippines also chairs the Climate Vulnerable Forum (CVF), a group of 43 countries highly vulnerable to climate change. The CVF, although not a negotiating group in the UNFCCC, was influential to the negotiations and lobbied hard for policies such as the 1.5-degree target, full decarbonization of the world economy, 100% renewable energy by 2050, and zero emissions by mid-century.

These commitments have been questioned even during PNoy’s administration, which openly supported continuous investment in dirty energy such as coal.

The question now is: what will a Duterte presidency mean for all these commitments of the Philippines to climate action? 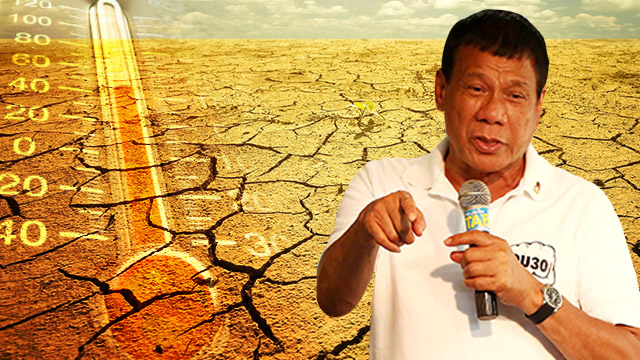 In the debate, Duterte also supported coal, saying that the Philippines does not emit as much carbon emissions as other countries like the United States. Duterte called the UN a hypocrite for not imposing sanctions on industrialized countries that emit the most carbon emissions.

He added that we need finance to shift towards renewable energy, which is seen to be more expensive than dirty energy. “Kung gusto nila, bayaran nila tayo (If they want that, they should pay us). Supply us with hydro, solar [energy].”

“We need to industrialize; we need energy.”

Duterte actually has a point, and which have been huge issues in the negotiations. What Duterte is talking about is equity and finance.

Equity means that countries that have polluted the earth more need to commit more to reduce their emissions. This has been the call of many developing countries, even after the Paris Agreement. Countries must do their fair share commitments in order for the planet to keep warming below 1.5 degrees Celsius.

Finance is also something that needs to be looked into closely in implementing the Paris Agreement. Developed countries need to assist developing countries to transition to cleaner energy.

On the first day of the negotiations in Bonn, G77 plus China reminded developed countries of their commitment to help developing countries “We are already taking measures to enhance capacities but we need technological and financial support,” said Thailand, speaking in behalf of the negotiating bloc.

Climate Change Commission commissioner and Philippine negotiator Emmanuel de Guzman shared the same sentiments. “There are limits to what vulnerable countries can achieve,” he said, while calling on all parties to take action in the areas of finance, capacity building and technology “to stimulate global action and greater ambition.”

So it is true, there needs to be equity and finance for the Philippines and other countries to implement its commitments to climate action.

However, we also cannot wait for the rest of the world to act before we start acting ourselves. Yes, developed countries will need to commit more, and yes the Philippines only emits a small amount of carbon in the atmosphere. But we are a country vulnerable to climate change impacts and has already claimed thousands upon thousands of lives and livelihoods.

A Duterte presidency can spell either victory or disaster for Filipinos when it comes to climate change issues. As president, he will chair the Climate Change Commission, which mainly negotiates for the country at the United Nations. He will also be held accountable to the commitments we made as a country.

If change is indeed coming, and if he wants to prove himself different from the previous administration, then he must, by all means, work harder to ensure the Philippines stops investing in coal and prioritize concrete adaptation plans.

Will the Duterte administration make climate change a priority issue? I hope so. We certainly cannot solve problems of crime and drugs if we no longer have land to live in. Only until we put the planet as a priority can we truly see change coming. – Rappler.com