The Bernardo Carpio of our times

Sep 1, 2016 6:30 PM PHT
Carlo L. Santiago
Facebook Twitter Copy URL
Copied
President Duterte’s popularity rests on his ability to appear larger than life, to become the savior we have all been passively waiting for 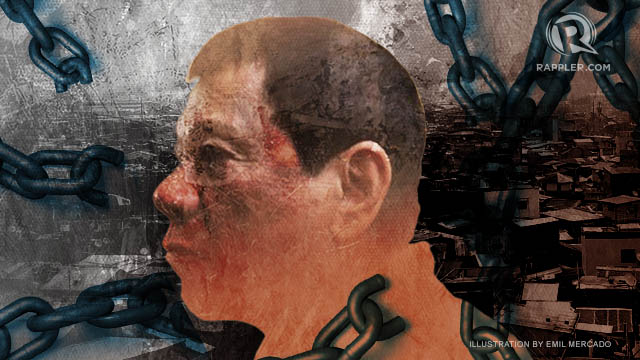 The legend of Bernardo Carpio – the strongman imprisoned between two great rocks in the mountains of Montalban who would, upon his freedom, lead his people out of slavery and into salvation – may have lapsed into relative cultural obscurity in recent years, but even then, we Filipinos are still familiar with the story behind the name.

That is because Bernardo Carpio represents the messianic archetype, the hero-savior chosen by destiny to fulfill great deeds. It is, undeniably, one of the more recognizable figures across genre and medium. And its various manifestations, from King Arthur to modern-day cinema characters such as Neo of the Matrix and Harry Potter, have become icons of popular culture.

It is not surprising then that the messianic archetype has managed to influence our perspectives, particularly in the field of politics. After all, the original concept of messiah is very much political by nature. Jesus Christ himself, who many consider as the Messiah, was executed for purely political reasons. In our time, the so-called leader of the free world, Barack Obama, continues to be likened to John F. Kennedy, who, in turn, was touted to be the King Arthur of his time, presiding over a new Camelot on a hill called Washington D.C.

Philippine politics is, of course, no exception.

From mystico-political leaders such as Apolinario de la Cruz, Maestrong Sebio and Valentin de los Santos, to more popular and successful politicians such as Ferdinand E. Marcos and Joseph Estrada, we have had our fair share of hero-saviors, authentic or otherwise. And while their lives and inclinations may vary, the basic leadership premise is the same: chosen by destiny, they and they alone could uplift the downtrodden and deliver the people to the promised land. Maestrong Sebio had his New Jerusalem in the wilderness of Bulacan, Marcos his Bagong Lipunan during Martial Law. All promised new beginnings, and for brief moments, the future never looked brighter for the Philippines.

The same conditions of corruption, poverty and social injustice present throughout much of our history continue to persist; so we, in turn, continue to look for our long-awaited savior, much to the delight of our political leaders. In the last election alone, we all heard promises of the same old spiel. Bagong Umaga, Tunay Na Pagbabago and other such similar campaign slogans were really just repackaged versions of New Jerusalem, of Camelot, of instant salvation.

Sure enough, the messaging worked. Our longstanding search for a messiah has now brought us President Rodrigo Duterte, a man who, by most accounts (even his own) fall short of the usual standards reserved for the position. It is, admittedly, unusual even for a dysfunctional political environment such as ours.

But truth be told, he is more folk-hero than politician and, as such, is above all political norms. The clenched fist, the kissing of the flag, the blatant disdain for polite society – all these symbolic gestures, coupled with his reputation as a no-nonsense city mayor and crime-buster have done more for his political career than any amount of political patronage or machinery could ever hope to do.

He is, deservingly or not, the Bernardo Carpio of our times: the breaker of chains, the champion of the oppressed. And just as the legendary Carpio was said to free us from Spanish oppression, Duterte now looks to free us from drugs, criminality and corruption.

To be fair, Duterte is not all populist bluster. He does bring up valid points about decentralization, and his crusade for greater government efficiency and austerity is certainly laudable. But make no mistake, Duterte’s popularity rests not so much on political advocacies or sound government policies but rather on his ability to appear larger than life, to become the savior we have all been passively waiting for.

It is, sadly, a classic case of messianic longing, and we have long suffered for it. No less than Rizal understood this, and his writings provide for us nuanced warnings. Take, for instance, the following conversation between the kutsero and Basilio in the fifth chapter of the Fili:

“‘Do you know, sir,’ he asked Basilio respectfully, ‘whether or not his right foot is free by now?’

‘The king’s,’ the driver replied in a conspiratorial whisper.

‘Our king, the King of the Natives…’

Basilio smiled and shrugged his shoulders.”

The king is, of course, none other than Bernardo Carpio, and it is, at once, a powerful portrait of the stymying effects of our enduring messianic fascination.

On one hand, Rizal shows the confident Basilio, who chose to rise above his station in life to pursue a life he believed he deserved; and on the other, the downcast and defeated kutsero, who, lost amidst desperate thoughts of freedom as only his King Bernardo could provide, forgot that his kalesa’s lights had gone out, thus bringing further troubles with the Guardia Civil.

The subtle point here is that it is not so much slavery as slave mentality that afflicts us. Indeed, we could break our chains, but then what?

President Duterte may just accomplish all the things he has set out to do, and for our sake, let us hope he does so; but after he is gone, what do we do? Change is just one part of the equation; continuity is the other. The danger in putting all our faith, and fate, in one man, however strong, is the tendency to take a backseat, to let the savior save us, instead of us saving ourselves.

More than a century has passed since Rizal touched upon the Carpio legend in the Fili, and now, more than ever, the shadow of Bernardo Carpio looms over our staid political landscape.

In a way, this is why Leni Robredo’s entry into the national spotlight offers a breath of fresh air. Amid talks of destiny and change and a return to greatness, Leni instead offers a message of partnership. It is a sobering approach and is easily the most compelling narrative out there; more importantly, it just might be what we exactly need.

Maybe, just maybe, Bernardo Carpio has finally broken free and has come to set us free, sans penis. Or this could all be another episode in the long line of colorful hero-saviors. Either way, whatever happens, perhaps it is best to heed Rizal, and, like Basilio, take destiny into our own hands. – Rappler.com

Carlo L. Santiago is a member of the Anastasio Institute, a non-profit organization devoted to the understanding and appreciation of the Filipino experience through storytelling.