[OPINION] Poverty and the ‘trapos’ 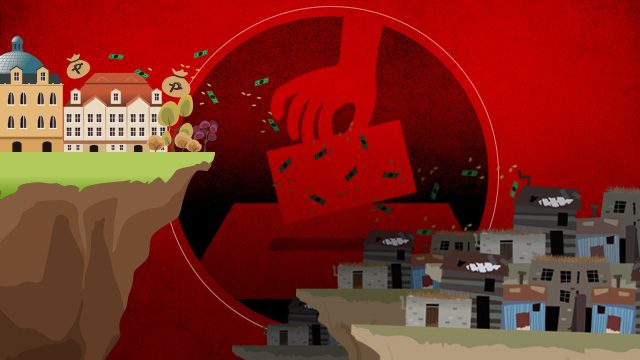 The campaign period for the May 2019 elections is nearing and a lot of trapos (traditional politicians) are on the prowl again, imitating hungry wolves hunting for a herd of lost sheep.

In general, election season is the time when politicians try to win the hearts of Filipino voters by making sweet promises. Like how their promises continuously fall from the sky, so do the funds they use to buy votes.

In the Philippines, vote buying is prevalent in poverty-stricken areas such as those alongside skyscrapers, industrial estates, haciendas, and gated communities. (READ: No poor Filipino by 2040: Can Duterte gov’t set the stage?)

How many poor people do we have in the country? If we go by the subsistence minimum approach, which is less than $1.90 a day, 2015 data from the World Bank show that around 22 million Filipinos or one-fifth of the country’s population still live below the national poverty line, while 1 in 10 individuals are vulnerable to falling back into poverty.

Meanwhile, when it comes to self-poverty ratings, the results of the Social Weather Stations survey for the last quarter of 2018 showed that 50% of Filipino families think they are poor. (READ: More Filipino families considered themselves poor in 2018 – survey)

Although poverty incidence in the country has significantly improved throughout the years, poverty in aggregate numbers remains high and the pace of poverty reduction has been slow. The poor, who make up a significant chunk of our population, have the ability to elect either seasoned or rookie politicians into positions of power. This is understandably why politicians do their best to appeal to the masses, and in most cases, they make claims that they too were once poor, hence they supposedly have the best interests of the poor in mind.

But why are there so many poor people in the country in the first place?

Social scientists have answered this already, but the myth of rich thinking vs poor thinking, and industriousness vs laziness keep on getting stuck in people’s minds. This is because we get bombarded with rags-to-riches stories in popular media, making us believe that the key to living a comfortable life is the mindset of rich thinking coupled with perseverance and patience.

But when we are confronted with facts that show there is global inequality where about only 10% percent of the global population own 90% of the global wealth, while 3.7 billion people are living a life of poverty, then we get to realize that this is not just about rich thinking vs poor thinking but poverty by design.

In the Philippines, this poverty by design is played out in political dramas. When trapos get elected, they do their best to recover the money they spent in bribing the masses by pocketing government funds and accepting bribe money from dubious government transactions. These malevolent schemes adversely affect budgeting and effective delivery of urban and rural social development projects. The numerous fund scams such as those involving the Priority Development Assistance Fund, coco levy, and Malampaya prove that corruption is happening.

These scams are one of the major reasons why in the Corruption Perceptions Index, the Philippines, with a score of 36 out of 100, was ranked 99th out of 180 countries surveyed in 2018.

There is a significant relationship between high corruption and high poverty rates in the country. For trapos, poverty is good news, since people who remain poor tend to accept everything coming from politicians.

Nowadays, trapos have become innovative in their strategies to buy votes. They claim government projects as their own, acting as if these services were funded with money from their own pockets. They are also wise in scheduling the delivery of such social services, usually when elections are near. (READ: The many ways of buying votes)

Indeed, poverty is the bread and butter of patronage politics. If we want to prevent trapos from holding public office, we should do more to address the root causes of poverty, instead of blaming the poor and branding them as “bobotante.” – Rappler.com