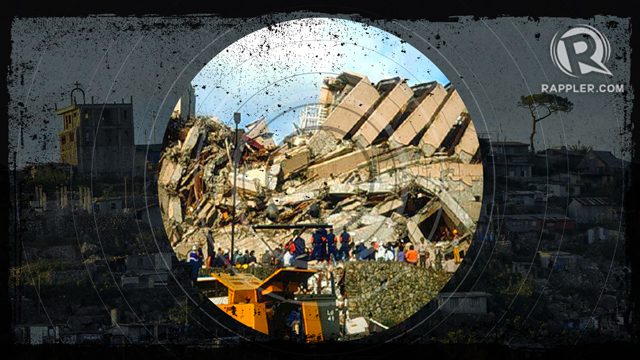 Facebook Twitter Copy URL
Copied
The July 16 earthquake that struck Baguio 29 years ago is a story without a background. You cannot be prepared for this one. The July 16, 1990, earthquake was so strong, the seismograph near the Lourdes Grotto performed seppuku when its needle swung wildly like the sword of a crazed samurai. (READ: Remembering the 1990 Luzon earthquake)

The big story in Manila that night was about a school building in Cabanatuan that collapsed. Because the tremors were felt in Manila, many of the side stories were on those. It was on the midnight news when someone realized, hey, why is Baguio so quiet?

Twenty-nine years ago, there were rarely any cell phones. Telephone lines and powerlines were yanked out by fallen poles. The mountain roads out of Baguio were buried by the mountains they were carved out from. It would take years before Kennon Road was reopened.

And Baguio was hardly quiet that afternoon and night. I was waiting for a cab when it happened and literally surfed on the cascading edge of the football field at Burnham. That place became the city’s muster point eventually. That hour I was there, a hundred souls were probably saved by preachers knocking on heaven’s door.

The way home was a chaotic river of wailing and babbling as the people filled the streets. Some of the buildings have collapsed or were in danger of collapsing. Almost all the Baguio people would sleep on the roads that night despite the slight drizzle.

And with your ear on the ground, you would hear the terrible crescendo of the aftershocks. It was like the sound of that huge round boulder in that Indiana Jones movie except they came every 10 minutes. No one slept that night.

The next day we searched for those who didn’t sleep with us. The lines to the gas stations were hopeless. There was panic buying in the groceries until they decided on rationing. Days later, those in the freezers were given to the soup lines. There were no reports of looting. (READ: The 1990 Luzon earthquake: Life after tragedy)

We went to Hyatt Terraces. I used to work there during summers and then saw the familiar workers on the side. They told me about our common friends who were trapped. The same thing in UB. Along John Hay, we noticed that the pine trees were able to stop the landslides, although in some mountains whole slopes just fell down. It was then I realized that I should be writing these down. People were just telling me stories as we sipped coffee given for free.

My late brother, a journalist, was relaxing by one of the pools at Asin Hot Spring with a co-journalist that July 16. When the earthquake hit them, the hot water sprung out and then vanished. They were naked and had to steal clothes along the way. They passed atop mountains and reached Baguio the next day. Then it was time to chase stories again.  He decided to add a bit to the metanarrative before opting to retire from journalism.

The weeklies came two weeks later so it was also just gathering stories for them. And drinking whatever they can buy. This is a story without a background. It just happened. Who do you blame? That will come later with the recovery. Who hoarded what? Who replaced the Ma Ling with sardinas? The miraculous rescues. The valiant rescuers. Those will come days later. In the first days, it was just listening to stories.

The metanarrative of Baguio is just like a blanket of fog hovering over us and sweeping our feet. Funny, but all I remember about the weather was the grey skies and the fog. One time when some thought it was safe to go back home, the little quakes appeared. In our neighborhood, a lolo and his apo (grandfather and his grandchild) went back to get some clothes and then an aftershock hit and the riprap wall fell on them. An old woman told me about her apo still trapped in Nevada Inn. All I can do was listen.

Story without a background

The city did listen during that time. The art community held its most compelling international arts festival at the end of the year despite the odds. They also spearheaded the NGO conference that plotted the future of the city. (READ: Faith and science: Lessons from the 1990 Luzon earthquake)

The city council passed an ordinance limiting the establishment of buildings to only 4 stories, but the ordinance seems to have been lost in the rubbles and some of the councilors forgot that they passed it.

The earthquake remains a metanarrative. People still divide their collectives into pre-earthquake and post-earthquake the same way the elders used World War Two as their metanarrative. Go to a coffee shop in Baguio (not to a yuppie bar) and drop the bomb: boom! All stories are gone and everybody will tell you where they were, where their friends were, who died and how their life changed. This is a story without a background. No matter how many earthquake drills you do, you cannot be prepared for this one.

We kept on repeating our own stories but forgot who wrote that metanarrative. It was that huge ball we heard rumbling on that first night we tried to sleep. It was the pine trees that stretched their roots to save us.

From millions of them decades ago, the DENR now say that the city now only has 500,000 pine trees. Let everyone plant one tree and we double that. And we’re not doing it. Instead, we just kept on cutting them or letting them die in our own backyards.

Last year, when we were hit with small quakes I was alarmed because I cannot feel them, despite the deluge of Facebook posts. What’s wrong with me, I asked myself, also on Facebook. Maybe like the rest of us, I lost the flow of our metanarrative. I already forgot to put my ear on the ground and really listen. – Rappler.com

Frank Cimatu is a veteran journalist born, raised, and based in Baguio City.