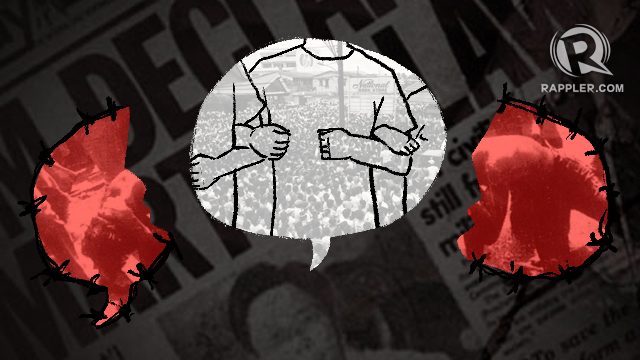 This week, I had the rare opportunity to listen to the stories of two women Martial Law survivors. Speaking before an awestruck audience of eighteen to nineteen-year-old university students in UPLB, Maria Cristina “Tina” Pargas Bawagan and Hilda Narciso proved the profound effects of stories.

In studying the history of our authoritarian past, we are often presented with numbers and the numbers are compelling: more than 3,000 people killed, 35,000 tortured, and 70,000 killed, with $5 billion to $10 billion worth of government robbery to boot.

Despite this, we still see an avid resurgence of historical revisionism and persistent pro-Marcos propaganda – and not a few people believe this. The election of Bongbong Marcos as senator in 2010, his close vice-presidential bid in 2016, and Imee’s easy senatorial win in the most recent national election are enough testament to the sordid effectiveness of their propaganda. In his musings, Ateneo de Manila’s Dr Filomeno Aguilar Jr, laments the collective failure of our schools and of the academia to embed the perils and brutalities of the Marcos regime in our memory. Dr Aguilar dirges how we forgot, that in the midst of the euphoria of EDSA I, “some cried when Marcos fell from power.”

We became too comfortable with what we thought was a liberal democratic consensus and neglected the fact that the two decades of Marcos presidency entrenched several legacies, not just in the affairs of the state, but also in the memory of the people. Such negligence made it easy for the Marcos families’ propaganda machine to twist the truth and spread deceit about the crimes of this despot, make up so-called achievements of the corrupt regime, and fabricate a narrative of a Golden Age in the time when funds were being stolen and people were being killed. Hence, despite the academic consensus on the failures of Marcos and his martial law, public opinion demonstrates an apparent forgetting or of simple nonchalance about what the dictatorship did to this country.

When confronted with the convincing and persuasive propaganda about Marcos, how do we push back? Listening to Tina and Hilda, I realized that the answer is simple – we need stories.

Tina candidly shared her journey in the anti-dictatorship movement. She shared how she willingly sought after the struggle, abandoning the comfort of home and privilege, being parted from family and losing her husband in the struggle. Her story reminded us that in the peak of her youth and idealism, she is one of the many who chose to sacrifice her life and freedom for the struggle. Her story reminds me of another hero, Lean Alejandro, a leader of the student movement against Marcos who said that “(t)he next best thing to freedom is the struggle to be free.”

Hilda did not mince words when she described the rape and molestation done to her for days by state agents in a safe house in Davao City, before being detained with other political detainees. Her voice did not falter when she shared how her tormentors laughed at her when she asked them to just kill her after her repetitive abuse. And she so bravely recalled how she willed herself to survive and live to tell the story. Now in her 70s, Hilda remains passionate on her resolve to help other victims and speak her truth before young people who are enjoying relative freedoms today because of the sacrifices of the generation before them.

After the forum, I asked my students about their experience listening to Tina and Hilda. One of them shared how different it was to listen to an actual person who went through such brutality from merely reading the stories from secondary sources. I remember feeling the same way when I had my first conversation with Susan Quimpo, another Martial Law survivor, as a college student in 2012. One detail that struck me in that conversation was how, after 3 decades since the dictator was overthrown, seeing soldiers with big guns still sends her shivers. It was a random detail that she shared but it left a hard impression on me: Martial Law is something that they carry every single day for the rest of their lives. For us, who had the fortune to not live through such period, it was just a historical detail. But for those who were tortured, detained, grieved for lost friends, families, and comrades, it was their truth. It is the responsibility of our generation to never let this truth be taken away from them – people died, women were raped, families were torn apart, the country was destroyed, Marcos is not a hero.

The stories of Tina, Hilda, and of countless other survivors of Martial Law remind us that our authoritarian past was not only an age of tyranny and oppression. More importantly, it was a period of unrelenting struggle, a history of indomitable resistance in the face of death, abuse, and injustice. While it is worthwhile to always be reminded of the mechanism of Martial Law, of the widespread corruption, of economic mismanagement, of the politicization of the military, and of crony capitalism, it is also important to remember that the strongest and the most sustained opposition against Marcos was propelled and mobilized by people who dared to fight back and to dream, albeit the imminence of death in such murderous regime. Marcos’ Martial Law is not only a story of how the oppressors oppressed. It is also the story of how the oppressed resisted. – Rappler.com

Vec Alporha  teaches History in UPLB. Before joining the faculty, she was Chairperson of the University Student Council of UP Baguio. She acquired her MA in History form UP Diliman.