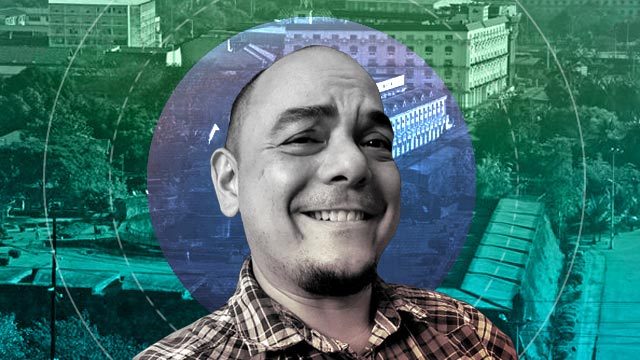 The exact date was August 13, 2005, a Saturday, and it was the first time I met Carlos Celdran. I wanted to walk the streets of downtown Manila at the time, and a friend who knew Carlos said I could sign up for his tour of Escolta. Tours devoted to this specific district of the capital’s core were rare, as other guides wouldn’t brave its inner streets. It piqued my interest that someone was actually conducting a thorough tour of the area.

On the day of the meetup, I was the only one who showed up. Carlos was expecting a dozen participants who backed out at the last minute. “What the heck,” he said. “On with the tour.”

We started with Calvo Building, a late 1930s structure that witnessed Escolta’s golden days when it was dubbed the “Queen of All Manila Streets” until its decline in the 1990s. Carlos brought with him a portable speaker and played “Moonlight Serenade.” He said that he wasn’t merely banking on nostalgia, that playing the song would help me imagine the heydays of Manila.

We entered the building’s community museum. Surrounded by news clippings, old soda bottles, and photos of prewar structures in the area, I suddenly felt a strong connection to the street. It was as if I had lived or worked there. It felt uncanny to be drawn into this particular place, yet I also felt grounded and secure as I stood there.

I was too embarrassed to tell Carlos what happened while he was busy tinkering with his speaker. He went on and told me how Escolta transformed from a sleepy Spanish street to a bustling district of Manila during the American Period. It was obvious that he knew the place well. Carlos recounted how Escolta had all the firsts – the first elevator, the first ice cream parlor, the first cinema in the country, among others. His knowledge of Manila was second nature, and he said that one needn’t be an old-timer to love the city; all it takes is commitment to know more about it, how it came to be, to understand its present and even its future.

With only the two of us in the tour, it occurred to me that he seemed to have veered away from the script. But I don’t think he ever had a script to start with. He was no-holds-barred about the current state of Manila. He lamented that it was going to the dogs, because of the city government’s lack of care and conscious effort to actually do something about Manila’s remaining heritage. The tour became a discussion on how building owners could actually benefit from tax breaks and the need for support from the community to promote cleanliness, peace, and order. I told him that we needed to talk to the right people, and proposed a reinvention of the street.

We walked further towards Plaza Sta Cruz. He said we just had to enter the Monte de Piedad, the old building that stood at the end of Escolta. When he described it as formidable, I asked what made it so. “The guards already know I bring in people who have no business to be there.” It had been converted to a grocery store at the time, and so I thought that maybe we could buy something. We entered the building and went straight to the beverage section. Inside, Carlos talked about Arsenio Lacson, whose statue stood across the street in the middle of the plaza named after him. The guards looked at us with suspicion so we paid for our drinks and left.

His tour cost around P150 for students then. I felt compelled to make up for the students who didn’t show up so I handed him a 500. He wouldn’t accept it and he gave me my change. We went our ways at the foot of Quiapo Bridge. It would be 10 years before I meet him again, right across the river, in Intramuros.

I was already working for the Intramuros Administration when I met him again. I was new at IA, and we were preparing activities commemorating the Battle of Manila. I had just left a job in corporate Makati for a government job in old Manila. After years of volunteering in the heritage conservation scene, I was finally working full-time in promoting Manila’s history and conserving its built heritage. The meeting with Carlos proved to be the beginning of regular collaboration with him and other artists and advocates.

In the decade that transpired, Escolta had once again come alive. It had become a thriving community of artists and merchants, and his tours played no small part in making that possible. Carlos’ tours weren’t just tours; they were also an awareness campaign that reintroduced Manila to throngs of tourists and to a new generation of movers and advocates. During one of our conversations, I kidded him for not remembering me. “Of course, I do,” he said. “You paid for my Coke and you saved me from the guards!”

The tours, too, had grown bigger, grander, and ever popular. Many days I would hear Carlos herding his curious flock across Fort Santiago. There’s no mistaking when he was there. Carlos at the head of the line, decked from head to foot in colonial-inspired clothing and finery, his voice booming and animated by the rise and fall of his narratives; dozens of tourists behind him, attention captured by this man giving them a tour and a lesson and a performance.

What I never told him, and I regret not telling him, though, was on that day in 2005, as we walked the streets of Manila, his tour helped me discover what I wanted to do. He was the push that I needed to begin my own advocacy in protecting the built heritage of Manila. I could tell him this now – perhaps the message would make its way to him somehow, but I could also almost hear him say: “Enough of this drama, my dear. Just get on with it.” – Rappler.com

Jeffrey P. Yap is currently the senior tourism operations officer of the Intramuros Administration and is part of a team that supported and coordinated the events and activities of Carlos Celdran in the Walled City.