Facebook Twitter Copy URL
Copied
'It remains a mystery as to why the Duterte government locks down everybody else except mainland Chinese, who tour or dock on our shores to extract our minerals, and recklessly expose our people to COVID-19' 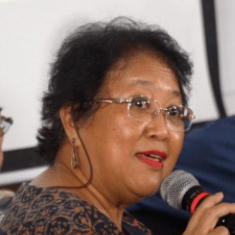 While the world is in a stupor because of the global lockdown, China has taken advantage of the crisis to sell the world its defective masks and pass it off as goodwill, worm its way into the UN Human Rights Commission, and strengthen control over the South China Sea by deploying a PLA carrier strike group in the area and declaring the Paracel islands near Vietnam and the Spratlys to be under its administrative jurisdiction.

In defiance of the rulings established by the PCA in The Hague, China continues to violate the maritime rights of other claimant countries. It has just sunk a Vietnamese fishing boat, and besides harassing fishermen in what has been traditional fishing grounds for all, its ostensibly private boats, armed to the teeth, have been patroling in our own waters, even aiming a radar gun at a Philippine navy ship, a fact that has occasioned a diplomatic note of protest on our part. (READ: U.S. warns China not to ‘exploit’ coronavirus for sea disputes)

What accounts for these blatantly brazen moves to seize control of the South China Sea and overrule an evolving rules-based approach to settling conflicts in the region?

One reason is that China’s economy is slowing down and in great need of the oil and gas reserves of the South China Sea to refuel its mammoth industries. China’s officials were reported to have told their counterparts in the US that the South China Sea is “an area of ‘core interest’ that is as non-negotiable,” on par with Taiwan and Tibet on the national agenda.

At the center of this “core interest” is occupying the Reed Bank, which has been declared as within our exclusive economic zone, and holds about half of the 11 billion barrels of oil and about a quarter of the 190 trillion cubic feet of natural gas estimated to be in the whole of the South China Sea as assessed by geological surveys. (READ: Recto Bank: Why China covets what belongs to the Philippines)

Another cluster of reasons has to do with the shift of policy from Deng Xiao Ping’s era of “peaceful rise”  and “good neighborliness” to a more aggressive and ambitious quest for hegemony, not just in the region but in the world.

As articulated by Zhang Wenmu, professor at the Center for Strategic Studies at Beijing University of Aeronautics and Astronautics, “In military history, command of the sea was at one point an important factor behind the rise and fall of nations…. China today is a flying dragon. But that is not enough…China must also be a dragon in the deep pool of the Western Pacific. Otherwise, it will not achieve the great revitalization of the entire Chinese nation.”

These are some of the driving factors behind China’s push for dominance in the South China Sea, and why it appears bent to do so outside of the rules, whether under UNCLOS or the PCA ruling.

In the mid-90s, when the Philippines discovered that China had built structures on Mischief Reef – supposedly shelters for fishermen but now proven to be military installations – China’s top unofficial spokesman, Pan Shiying, was quoted as saying that if China’s offer of joint development was rebuffed, “it will have no choice but to take over the islands forcibly.”

These days, under the pliable regime of Mr. Duterte, there is no need to apply force.

Already, a source tells me that there are at least 3 million mainland Chinese who have entered the country, many of them illegally. The report that among the thousands of POGO operators are military agents is not surprising. It is an old tactic employed by the Japanese preparatory to invade these islands in the last World War. From stories my mother told me, it was shockingly heartbreaking to see the Japanese neighbors they befriended – the local baker and the owner of the corner store down the street – suddenly donning military uniforms once Pearl Harbor had been bombed.

In El Nido, Palawan, I have been informed that mainland Chinese have been buying hectares and hectares of land. This movement is being kept under wraps, according to an informant who was part of the development planning team. El Nido is close to Pag-asa Island, the lone land mass that we have occupied in the Spratlys, which is now in danger of being seized as part of China’s expansive claims.

It remains a mystery as to why the Duterte government locks down everybody else except mainland Chinese, who tour or dock on our shores to extract our minerals, and recklessly expose our people to COVID-19. Possibly, if this government continues to kowtow to China, we may see something much worse in the near future: the covert occupation of this country by a nation ruled by a band of communist thugs whose ruthless ascent to power has dealt untold suffering to millions of their own people. – Rappler.com