[OPINION] Harry’s rapture and the pandemic in our political leadership Harry Roque was ecstatic the other day. He realized that June is ending and the number of COVID-19 cases in the country was still a couple of thousand less than what the UP modelers have forecasted. He was genuinely very happy about it that I, for a moment, even thought I was watching him cheering for UP in the UAAP Basketball finals. But no, it was a press conference by the Presidential Spokesperson of the Republic of the Philippines. The presidential spox was talking about data, epidemiological data. He was doing statistical inferencing of sorts. And that juvenile smile, that authentic joy Roque radiated, was symptomatic of a persistent pandemic in the Philippine political leadership. (READ: Roque spins again: ‘We beat the UP prediction…Congratulations, Philippines!’)

Public policymaking is probably the most recognizable function of the government. It may very well be considered as the overarching reason, the raison d’etre, behind the very existence of governments. But what makes good public policy?

In the past several decades, public policy has become an interdisciplinary intellectual pursuit — mathematicians, statisticians, economists, sociologists, political scientists, and psychologists have extended their scholarly turfs toward improving analyses and designs of policies. This is so because of the critical importance of policies in maintaining a social order, improving living standards, and addressing the persistent plight and emerging challenges of humanity (e.g. poverty, injustice, climate change). Public policy is so important that its practices and methods have become mostly grounded on solid theories of sciences. Good policies are not anymore what the good politician thinks and feels is the right thing to do. The consensus among scholars is clear: sound, responsive public policies are products of rigorous empirical analyses. Simply put, good public policies are data driven. (READ: [OPINION] Scientists and politicians should break out of their bubbles)

There is certainly no dearth of brilliant staffers in government departments who can perform rigorous analysis of data and deliver evidence-based design of policies. The PIDS, NEDA, DOF, PCC, BSP, DOST, among many others, have very qualified people — most of them earned postgraduate degrees from top universities in the country and even abroad. We can trust them to do the legwork or, more appropriately, the “brainwork” for policy design. But at the end of the day, as in most systems of government in the world, it is the elected — the politicians — who get to decide on the fate of policies.

The pandemic in the political leadership

Here, dear Brutus, is where the fault lies – the quality of politicians we elect to office.

The pandemic in political leadership is the prevalence of overconfident politicians who think that with the prenominal “Hon.” – worthiness is an issue for another day — and a microphone and podium, they can already deliver their on-the-spot analysis of the problems and challenges we face. Pretty much like what Roque did. He was not reading the script, if there was one, which should have been prepared by the epidemiologists. This equally worrisome pandemic makes everything about public policies political, when they should not be.

A case in point is a committee hearing in the Senate which I watched months ago; it is still available in the Senate’s YouTube channel. It was a committee hearing with some Finance officials last year. The discussion at one point was about the Conditional Cash Transfer (CCT) program of the government. One senator expressed his misgivings about the CCT so confidently. He sounded like he knew what he was talking about. Then the brilliant (former) Finance official with a doctorate in Economics responded, “Your honor, there is actually plenty of empirical evidence which tell us that the CCT works.” The senator felt challenged by the response, and the committee chair had to come in and remind them that it should not be discussed in that forum. I was amazed by the Senator’s willingness to debate, on the spot, about the empirical evidence of a social assistance program, against a person with a PhD in Economics. See the pandemic that I am talking about? I would be convinced that the Senator will stand a chance against the official if he could recognize the following: 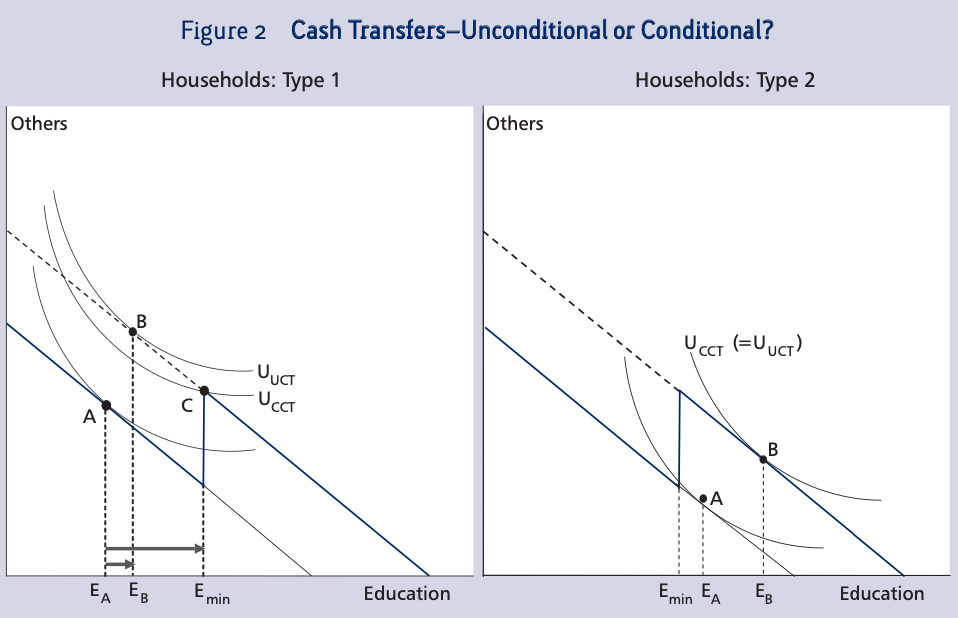 All these images are telling of the kind of rigorous analysis that sound policies require. The first image is from Usui’s (2011) ADB-commissioned study about the CCT in the Philippines. The figure illustrates a simulation of how two poor households maximize utility given budget constrains under two conditions: cash transfer with and without conditionalities. The second image is taken from Tutor’s (2014) study on the impact of the CCT on consumption. That is an example of an estimation model to measure the impact of the program on a particular variable, in this case consumption. The third image is a statistical summary table of the results taken from Kandpal, et al.’s (2016) study on how the CCT reduces severe stunting in the Philippines using randomized control trial (RCT). See, your honor? It looks like it works.

The point of showing these images is to show that the problems that the government ought to address, like poverty and this pandemic, require from political leaders an instinctive understanding and informed appreciation of data. Sure, let the well-trained staffers do the brainwork. But the politicians who get to decide on the fate of the brainwork shouldn’t be lacking brains. Otherwise, like what we see rather so often today, they just get to say whether a policy works because they feel or think so. Otherwise, we will keep having political leaders who politicize data, like what Roque did, not only because it is politically expedient to do so, but because it is likely that they are just plain ignorant of how to make sense of data. (READ: [OPINION] Speaking truth to power: Why the government should listen to scientists)

In my conversations with elder fellows about politics, I always get the impression that some Filipinos have the tendency to associate being a lawyer with the best qualification of, say, a congressman. That is at best laughable, and at worst plainly stupid. Irrespective of education and professional training, I believe that the best qualification of politicians should be the instinctive understanding of the scientific method. If they know the logic behind that and how it works, we will surely elevate policy discourse in the country. Of course, I am being idealistic. But now we have Rep. Stella Quimbo who has a PhD in Economics and has an extensive research portfolio on economics and public policy. We have Rep. Joey Salceda who can run the numbers and explain rather well the concept of elasticity vis-à-vis imposing sin taxes. Is it too much to ask for a little more of their kind? – Rappler.com

Tristan Piosang is currently doing his master’s degree in Public Policy with a specialization in Economics at the Wellington School of Business and Government, Victoria University of Wellington in New Zealand. He is a recipient of the New Zealand Scholarships Award under the NZAid Program of the Ministry of Foreign Affairs and Trade. Prior to his postgraduate studies, he served as a Research Associate at the Center for Bridging Leadership of the Asian Institute of Management.