Facebook Twitter Copy URL
Copied
It really concerns me that traffic enforcers, motorcycle riders, passengers of non-aircon buses, vendors, and pedestrians are subjected to such high levels of pollution

Air pollution is common in big cities like Metro Manila. With a very dense population concentrated in a small region, it’s inevitable that we will pollute our environment.

In Metro Manila, most of the air pollution comes from automobiles, and one of the nastiest pollutants is known as soot. Soot are very small black particles that we usually see coming out of bus and jeep exhausts. These particles are so small that when we breathe them, they go directly into our lungs, and to make matters worse, they cause serious diseases like cancer.

With EDSA being the main arterial roadway of Metro Manila, one would expect that pollution there is bad, so I thought I’d drive around on a weekday morning rush hour – and again on Sunday for comparison – to measure the amount of soot along EDSA. 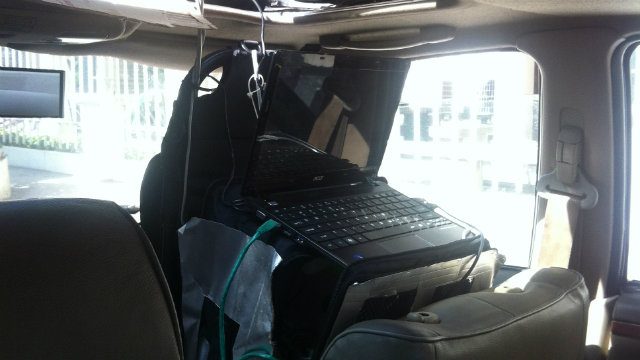 On Wednesday morning, May 13, we hit the road. Together with an atmospheric science masters student from the Ateneo, Honey Alas, we did a mobile air pollution measurement along EDSA from Muñoz to the Mall of Asia (MOA) and back to Muñoz.

The trip took more than two-and-a-half hours. I never wished for EDSA traffic to be bad before, until that day. And this wish was easily granted.

So how was the measurement? I think I will not open my car window along EDSA anymore. Ever.

From Muñoz at 6:30 am, soot concentration was immediately high, with brown and red shades in front of SM North due to high volume of buses at the Paramount bus stop. From there, traffic was light until after the Kamuning flyover, though pollution was consistently high. Around Cubao, soot was especially high again, most likely due to the volume of stationary buses.

Interestingly, on Santolan and Ortigas flyovers, soot briefly got low as average speed increased and the car was at a higher elevation. It got bad again at the Shaw underpass as air was trapped in that short tunnel.

From Boni, traffic was crawling until we passed Rockwell, and we saw that it was green around Orense. But that didn’t last long, as once we were inside the Ayala underpass, pollution was in dangerous levels. Traffic in the Magallanes area was surprisingly very light that morning, thus the relatively low pollution in that area.

Then it was up again from Tramo to Macapagal Avenue, after which it abruptly dropped in front of MOA.

Northbound traffic was lighter and most of the green and blue shades in the graph were actually from the northbound measurement. When we reached Quezon Avenue, we stopped for a drive thru, and what we saw was, if you drive even just a few tens to hundreds of meters away from EDSA, soot concentration drops.

Soot concentration from Centris to Philcoa — via Quezon Avenue — was typically high. Then very high again around the Philcoa bus and jeepney stops, but as soon as we entered University Avenue along the University of the Philippines-Diliman and CP Garcia, air was clean all the way to Katipunan. As anyone would expect, our Sunday morning drive along EDSA was a breeze, our route started from Magallanes heading northbound. The trip was pretty uneventful.

I drove straight to Monumento in Caloocan then turned back (East) southbound. A brief slow down around Balintawak raised the measured pollution levels. After that, it was almost constant speed to MOA. Total travel time took just over an hour. A significant difference is apparent from the weekday measurement. Most of the high concentrations were recorded when there was a bus right in front of me. But overall air quality was better that Sunday due to fewer cars.

It really concerns me that traffic enforcers, motorcycle riders, passengers of non-aircon buses, vendors, and pedestrians are subjected to such high levels of pollution. There is almost not a single trip on EDSA that I don’t see buses driving like maniacs, and emitting vast quantities of black smoke or soot. I guess if they don’t kill you immediately with speed, they’ll kill you slowly with pollution.

And it seems that such drivers are immune from our laws. Have you ever seen a bus or a jeep flagged down for roadside emission testing?

This is a difficult problem to solve, but if people are more aware of the air pollution we are all facing in Metro Manila, we would all demand more from the government. We will demand a better environment. – Rappler.com

Gerry Bagtasa, Ph.D. is an atmospheric physicist with the Institute of Environmental Science & Meteorology, University of the Philippines. He is part of RESCueAIR, a consortium of air pollution researchers mainly from UP Diliman, Ateneo de Manila University/Manila Observatory and De La Salle University. He also runs a weather forecast website, team member of Project Noah, and a partner of Rappler’s #WeatherAlert.