[ANALYSIS] From bullied to bully: How China became an aggressor Facebook Twitter Copy URL
Copied
'By looking back on China’s modern history, we can understand how China evolved from a sleeping giant to a potential superpower'

China is once again in the international spotlight after its latest hostile acts on two fronts. On the one hand, there is the Taiwan Strait, which separates the self-ruling island of Taiwan from mainland China. On the other is the West Philippine Sea, which pertains to the Philippine government’s official designation of the eastern portions of the 1,400,000-square mile South China Sea.

China also has territorial disputes with other countries, most notably Japan, Vietnam, and India. This aggressiveness towards its neighbors, however, was not always the case, especially if one looks at the Chinese’s experience with the Europeans during the last decades of the Great Qing, the last imperial dynasty that ruled China from 1644 to 1912. By looking back on China’s modern history, we can understand how China evolved from a sleeping giant to a potential superpower.

The territorial losses that China suffered in the 19th century were mainly caused by the internal weaknesses of the Qing, which made it susceptible to Western imperialism. The Manchu clung to absolute power, so it was unable to modernize its political system and medieval-style military, and was thus exploited and overwhelmed by modern armies and navies of Western imperial powers. These powers included France, Germany, Russia, the United Kingdom, and even Japan, due to the Meiji Restoration’s  western-style modernization. These powers formed what textbook historians called spheres of influence (SOI) in China, where they exercised their own special powers (i.e., political, economic, cultural, and military) over significant Chinese territories. An example was during the Opium Wars, when the British, later with the French, bombarded port cities like Canton. This led to the Qing authorities signing and entering unjust and unequal treaties and “leases” that humiliated the empire.

The following are some of the notable concessions that Qing China gave to Western imperialists:

These humiliating defeats prompted some reformists to launch reform and “self-strengthening” movements within the imperial court to put the empire back on track – but to no avail. The frustration with reforms on the part of the already unpopular Manchu dynasty culminated in the Xinhai Revolution in October 1911. Ultimately, this led to the founding of the Republic of China (ROC) on New Year’s Day of 1912, provisionally led by Sun Yat-sen. The following month witnessed the abdication of the last Qing emperor, the six-year-old Puyi, ending the 2,000 years of imperial rule in China.

National unity, however, became the biggest problem for the new republic in the following decades of the 20th century. After his provisional rule, Sun handed over the presidency to the more influential Yuan Shikai of the Beiyang Army. In 1916, Yuan Shikai died, and his military  generals broke into different factions. Historians called this period the Warlord Era, when China was ruled by regional warlords, especially in the north.

At the same time, Sun’s Kuomintang (KMT) party, based in the southern city of Canton (Guangzhou), challenged the legitimacy of the fragmented Beiyang government. Meanwhile, Beijing was rocked by the May Fourth Movement student protests in 1919, after the signing of the Treaty of Versailles which ended the First World War. In this treaty, German territories in China were handed to Japan despite China’s participation on the side of the Allies, and this led to many Chinese feeling betrayed.

In 1928, the Warlord Era ended as Sun’s successor, Chiang Kai-shek, militarily defeated the northern warlords through the Northern  Expedition, leading to the reunification of China. Still, the problems did not end here for Chiang and his KMT party, as they immediately faced a more formidable rival, the Chinese Red Army, led by Mao Zedong and the Chinese Communist Party (CCP).

The following decade saw the raging Chinese civil war between the nationalists and the communists, where Mao’s power and influence started to rise. In the face of the Japanese aggression against China, the KMT and the CPP were forced to a détente, building a united front to resist the aggressors. But the efforts proved futile, as their actual cooperation was only minimal.

With the defeat of Japan in the Second World War, the civil war resumed, but this time the CCP had the advantage, and in 1949 Mao Zedong proclaimed the People’s Republic of China (PRC), as Chiang’s KMT government retreated to Taiwan.

It was only after these series of internal conflicts that China, this time under communist rule, managed to focus on its peripheral territories and deal with its territorial rivals. Twentieth century China historian Maurice Meisner stated that the policies pursued by the PRC in the 1950s – national unification and integration, land reform, and modern industrialization – followed the program previously advanced by Sun Yat-sen. With the assistance of the former Soviet Union under Joseph Stalin, not only did the Russians help Chinese industrialization, but also the modernization of the People’s Liberation Army (PLA).

However, the policy of “de-Stalinization” pursued by Stalin’s successor Nikita Khrushshev and the subsequent Sino-Soviet (ideological) split led to the collapse of the formerly close friendship between the two socialist countries. Aside from the Indians, the Chinese even engaged the Russians in a series of dangerous border skirmishes that nearly brought them to the brink of war.

In 1978, two years after the death of Mao Zedong, the CCP launched a sweeping market reform to its economy, formerly characterized by state ownership and central planning. Essentially, the reforms included the de-collectivization of agriculture and the privatization of state-owned  industries. In other words, the CCP reversed the socialist policies pursued under Mao. Maoist economist Pao-yu Ching calls this the restoration of capitalism in China, where private ownership once again started to thrive.

With capitalism back in China, the Chinese military in the 1980s started to be aggressive in the Spratly Islands, where geological studies suggest a potential oil deposit and natural gas reserves. China and Vietnam in 1988 even had a naval skirmish over the Johnson South Reef in the Spratly Islands, leaving dozens of Vietnamese soldiers dead. 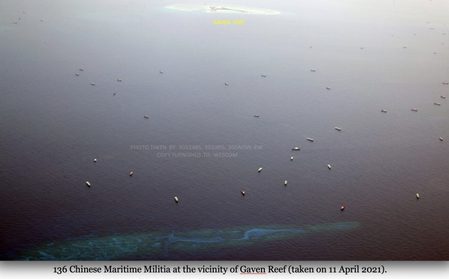 The foundations for industrialization, laid out during the period of socialism in China, enabled the modernization of the Chinese military – with assistance from the Russians. With this modern army, the PRC has been able to avoid the humiliation suffered by the Qing dynasty,  manifested by its aggressiveness toward its present border conflicts.

With these developments, China today has become the imperialist bully it despised back in the 19th century. But aside from industrialization, it should be explored whether the restoration of capitalism in China four decades  ago also paved the way for the Chinese aggression that we experience today. – Rappler.com

Jervy Briones is a lecturer of history at UP Los Baños. He took AB History at PUP Manila and is currently finishing his MA in Philippine Studies at the Asian Center at UP Diliman. His research interests revolve around social movements, Marxist/critical theory, and cultural studies.