[OPINION] Bais City and its people deserve to be seen Facebook Twitter Copy URL
Copied
(1st UPDATE) I remember Bais to be quiet, unassuming, never seeking any attention. But now, after Typhoon Odette, the city and its people deserve to be seen.

I remember Bais City to be quiet. Early mornings cool and crisp, I’d be woken only by the sound of roosters interrupting my dreams, just as the sun rose. Then, the thrum of tricycles plying the streets not so distantly as more people woke up, too, and lived the day. In hindsight, those summers in Bais had been the only time in my life where I readily and willingly woke up at the crack of dawn – all so I could join my cousins to check on the chickens and pigs my grandmother kept in her backyard.

For most of the day the only other sounds I’d hear would be my aunt calling us in for lunch, lively conversations as my grandparents hosted a neighbor, a friend, a cousin of someone’s uncle they once knew who happened to pop by in the late afternoon. Other days, there would be the distinct clacking of the mahjong tiles whenever my aunties played. My grandfather – Lolo – apparently refused to play with his own children, my aunties, because the mahjong he knew from China was slightly different from theirs. I like to imagine he scoffed. More than once my grandmother – Lola – secretly handed me money to gamble with on the mahjong table, even though I knew nothing about it.

Bais City is one pin on the map of my family’s migration history spanning over 13,000 kilometers, along with Manila as well as Fareham and London in England, then Guangdong and Beijing in China.

I could tell you some facts now: Bais City is in Negros Oriental, an island in Visayas in central Philippines, about an hour’s drive from the airport in Dumaguete City, which is a one-hour flight away from Manila. It has a population of 84,000 people. There is agriculture and raw sugar.

But I did not witness the city through the lens of these facts alone.

On many nights I was in Bais, an eerie, deafening silence would settle in by about 8 pm. It was very jarring for someone like me who grew up in the bustle of Manila, so used to the constant vibrations of a metropolis. The small city turned in early. It made me restless.

I remember Bais City to be quiet. But just a few days ago, my aunt spoke of strong winds whistling through the night as Typhoon Odette (Rai) hit the city. It made her restless. 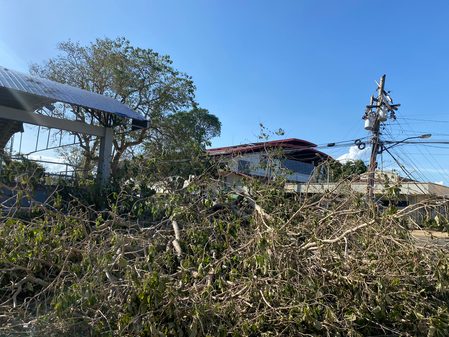 A grey metal cane, loose striped pyjamas and a white shirt, a wooden rocking chair, the distinct smell of efficascent oil, soft wrinkled skin, a warm toothy smile. I only ever knew my Lolo as an old man. I remember the breezy and lazy late afternoons in Bais, when the sun was no longer as painful on the skin, and he’d sit at the lanai of the house he lived in for decades, my mother’s childhood home. I don’t remember seeing him outside, in the world. During the brief stretch in which our lifetimes overlapped, I only ever saw him walk slowly, one careful step at a time, aided by his cane. But I know that decades earlier, he liked to wander.

Lolo migrated to the Philippines from somewhere in Guangdong, China before World War II. Then he settled down in Bais, where he and Lola raised my mother and her siblings. He regularly travelled to Hong Kong and Manila and back to Guangdong. Of the many places he had seen, somehow, Bais felt right to build a life and live out the rest of his days. There is likely an economic historical context for Chinese migratory patterns to the Philippines during the period he moved, but I will never know for certain what else he saw in Bais that made him stay. I only know that it must have been good.

In awe of the sea

The roar of the wind and the moped’s engine filled my ears as we drove along the winding road that curved along the edge of the sea. I can’t recall how old I was or when exactly this took place, but I remember stopping on the side of the road and looking over the edge of the seawall, waves crashing onto the giant, moss-covered boulders below. Tiny crabs crawled sideways on top of the rocks and in the crevices. The salty air was as humid as can be in the middle of a tropical summer. As a city kid, I also remember being in awe of the sea’s easy accessibility from my mother’s childhood home. Of course, seafood was often on the menu, colorful seashells that required a safety pin to extract the unod. I never stopped asking for it whenever I visited. In the distance is the clear outline of another one of the Philippines’ more than 7,000 islands, Cebu. The island was close enough to make out the greenery in the mountains. My mother said Lolo used to take her and her siblings to a shallow spot somewhere in the middle of the sea, where he would toss them overboard. That’s how she learned to swim.

Bais City is small. People pretty much know everyone. A trip to a store would never be a transactional in-and-out. There would always be a quick catch-up involved, rarely did they rush. I remember the doors to my grandparents’ house were always open. It was the same for my aunt’s house later on. Coming from a capital city where gates and high walls laced with barbed wire or broken glass were the norm, I found this curious. My mother said there was no need, there were no burglars, everyone knew everyone, everyone was welcome.

For most of my life though, I have done Bais a disservice. Whenever someone asked where my mother was from, I repeatedly said Dumaguete instead, the bigger city with the airport nearby. I did this because it seemed easier. Everyone knew Dumaguete. And my mother was born (apparently Bais didn’t have a hospital at the time) then studied there anyway. On the few occasions I attempted full honesty, I was met with blank looks and had to explain where Bais was. It’s not anyone’s fault. Bais is unassuming, simple, not your standard Philippine tourist spot. Instead, it is the city people pass through to get to other destinations. It doesn’t beg for you to look twice. But that does not mean it should be bypassed.

Nowadays I’m more patient. I take time to mention and explain if necessary the places that thread the fabric of my identity and heritage; this city that deserves to be witnessed and heard and spoken about, even in my clunky Manila-accent Bisaya.

This is, after all, the city that raised my mother, who, like many others before and after her, left her small city for the big capital (in the same way I also left Manila for London). In many ways, it doesn’t seem like she left. My mother regularly speaks on the phone to her siblings and friends who still remain in Bais. For a couple of days while Odette ravaged the city, she could not reach them. It was a relief to hear from them again. Often, after getting off the phone with someone who speaks Bisaya, she would talk to me in Bisaya as well, seemingly unable to code-switch to Tagalog as quickly. Maybe she doesn’t want to. Maybe she shouldn’t.

I remember Bais City to be quiet, unassuming, never seeking any attention. It simply is. It dares to just be, in one small part of an island within a huge archipelago. But now, after a calamity, the city and its people deserve to be seen.

Jane Bracher was a former sports reporter for Rappler. She now lives in London. The writer’s family in Bais is currently raising funds to purchase and distribute relief goods in the city and surrounding areas. Please send your donations through the following channels: GCash: 0917 910 2844 Zyrane Canete; Landbank of the Philippines savings account: 2587030570 Mitzi T. Canete