“Personnel is policy” was a rallying cry of one-time presidential hopeful Elizabeth Warren during the 2020 US elections. The slogan reveals an important aspect of governance — that often, appointments by the president are as much an articulation of policy as the specific policies to be implemented.

Under the Constitution, the “executive power” is vested in the president. This executive power includes the appointment of the persons tasked to implement the law. The president, of course, exercises the power of control over these appointees.

Personnel choices are probably not as scrutinized as the other aspects of a candidate’s platform, due in part to an unwillingness on the part of the candidates to tie themselves down that early into their campaign. Appointments are frequently used for political horse-trading — high-profile Cabinet positions are given in exchange for support during the election, or as a reward for support already given. One prominent example is President Duterte’s appointment of Mark Villar in 2016 as the public works secretary in exchange for the Villar family’s enthusiastic support of his presidential campaign.

Another case is the appointment of Mar Roxas as the interior secretary during the presidency of the younger Aquino. The appointment was made in reward of Roxas giving way to Aquino during the 2010 elections, and was also thought to boost Roxas’ visibility in aid of his 2016 election chances.

But appointments also serve to signal certain policy thrusts of the administration. For example, the appointment of childhood buddy Sonny Dominguez was a signal to the business community that the abrasive President Duterte would not encroach into the markets like a bull in a china shop (never mind that Duterte would nevertheless rattle the economy several times throughout his term). Dominguez was most prominently the former agriculture secretary during the administration of the elder Aquino, and worked to clean up the financial mess in the rural banking sector as a result of the “Masagana 99” program of the Marcos dictatorship (a fact the good secretary made sure to point out to the dictator’s daughter in one Senate hearing).

PhilHealth Chair Dante Gierran is another example. A CPA-lawyer by training, Gierran was tasked by Duterte to head PhilHealth, which at that time, was embroiled in a massive corruption scandal. Gierran had recently stepped down from a directorship at the NBI, having reached the compulsory age of retirement. Although Gierran had no prior experience in health policy, Duterte intended for him to use his investigatory expertise to clean up the embattled insurer. Whether Gierran has been able to achieve what he was set out to do remains to be seen, however.

To be sure, the president does not have unbridled power to appoint in all cases. For some high-profile positions in the Executive, the Commission of Appointments (CA), a 25-person body composed of members of Congress and chaired by the Senate President, will need to give consent to the president’s appointments. The heads of the executive departments, for instance, will need to go through the vetting of the CA. This opens the possibility of the president having to compromise his agenda with that of Congress’. In most cases, Congress goes willingly with the president’s choices, due in part to the House’s reliance on the President to secure its pork barrel. But the CA does, on occasion, buck the president’s will, which could be because the senators enjoy a simple majority in the commission (with the Senate President voting in cases of a tie).

The potency of the CA’s power was demonstrated in 2017 when the CA successively rejected some of the President’s left-wing appointments. As a concession to the Left, and as part of ongoing peace negotiations with the communist insurgency, Duterte appointed Judy Taguiwalo to be the welfare secretary, and Rafael Mariano the agrarian reform secretary. Their appointments were later rejected by the CA in a closed-door vote, the cause of the rejections not explicitly stated. Duterte would later express relief that his appointments were rejected, a turnaround in sync with the collapse of peace talks between the government and the armed rebels.

TIMELINE: At what point did Duterte’s allies turn into critics? 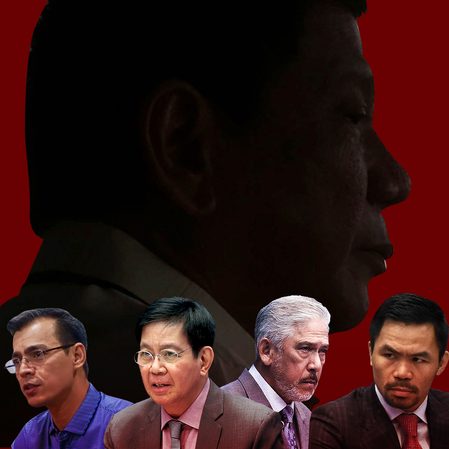 The winner of the 2022 elections will have wide discretion to effect policy changes across the board though the power of appointment. The chair of the PCGG will determine just how enthusiastic the PCGG will continue to be in pursuing the ill-gotten wealth still under Marcos hands. The education secretary will design the curriculum that a majority of the Philippine youth will learn in primary and secondary school, in an environment where disinformation has become a perverse force in society. The next chief of the NEDA will set the course of the economy for the next six years. The health secretary will of course design the country’s exit strategy from the pandemic, as recovery looms over the horizon.

The election of the next president is not just about the installation of one person in government. With the election of the president comes all the president’s men and women who will serve with him in the next administration. Although candidates may opt not to openly declare who they will appoint during the campaign season, one may infer a candidate’s picks from the people who currently surround and advise him or her. For instance, an Isko Moreno presidency might see Dr. Willie Ong as health secretary. A President Marcos Jr. might have VP aspirant Sara Duterte as DILG chief, given her many years as a local chief executive. President Leni Robredo will likely have Senator Kiko Pangilinan, a farming and fisheries sector advocate, heading the agriculture department.

The next president will shape the government in more ways than one, which makes voting all the more crucial in determining the future of the country. As we assess our election picks, we should understand that a candidate’s platform does not consist solely of the programs he or she will implement once elected. It also matters to whom he or she will entrust the business of government. After all, personnel IS policy. – Rappler.com

Liam Lu is a full-time student at the University of the Philippines College of Law. He earned his economics degree at the Ateneo de Manila University with a minor in Public Management. He hopes to someday be able to craft public policy.