[OPINION] Do not vote for shameless campaigners in the pandemic Facebook Twitter Copy URL
Copied
'[V]oters must be reminded that the transformative changes they have been looking for cannot occur overnight, no matter what any candidate says'

Has the COVID-19 pandemic placed us on the path to finally ending the toxic status quo of Philippine governance?

Judging by the past few months, the obvious answer is no.

It is frustrating to see that even in the midst of the pandemic that is causing millions of Filipinos to suffer, a large portion of the national news coverage focuses on traditional politicians or “trapos” already arguing while promoting themselves as the next saviors of the country. These squabbles remind us of a dysfunctional family with a bunch of entitled children fighting over the approval of an abusive father.

A 2018 ruling by the Supreme Court opened the floodgates for a wave of political ads to pollute our television, computer, and phone screens months before the official campaigning period. We have seen these exact same “infomercials” for years: annoying jingles, taking credit for achievements that are not theirs, claiming to be the only one who can solve the biggest issues facing the nation; many of them even carry familiar family names. Even potential candidates that present themselves as “outsiders” (even though they are “trapos” themselves) to the ruling regime are now airing campaign ads disguised as “infomercials.”

What is worse is that television, online, and social media networks do not even need to air these to make profits; the equally-as-annoying ads from e-commerce companies have got that covered since the pandemic hit the Philippines. It is fair to question whether or not these media entities care about either holding up high journalism standards or their role in objectively influencing national or local discourse, as much as they care about maximizing their earnings.

The situation is just as bad at the local level. Tarpaulins and posters of hopefuls planning to run in 2022 are already spreading nearly as fast as COVID-19 in towns across the country. Remember when those tarpaulins encouraging Davao City Mayor Sara Duterte to run for president popped up during the first few months of the pandemic? 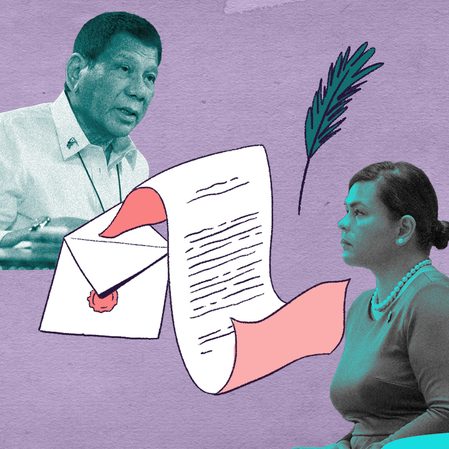 But unlike the pandemic, there are no mechanisms in place to stop it, due to the Supreme Court ruling and Section 13 of RA 9389, which states that a person is considered a candidate only after filing his/her certificate of candidacy.

Just because something is legally allowed does not mean it is not wrong. This is not a message to ignore the rule of law; we all know just how badly we need good governance these days. Rather, it is another sad reminder of how corrupted and exploited our branches of government have been. These ads are an obvious abuse of the freedom of expression, with “trapos” being able to do what they please, as long as the words “vote for [insert position here]” are not mentioned.

Let’s face it: the standards of many Filipinos for their leaders have not been high in recent years. The largely-abysmal performance of the Duterte administration has only made it worse, to the point that doing something right one to four times out of 10 is now considered as “good governance.”

Apparently, the Duterte government, which fails to properly compensate COVID frontliners yet plans to build a memorial for deceased health workers, is considered as having a satisfactory performance…if the surveys are to be believed. Regardless, there is a clear disconnect that needs to be immediately rectified. The bar is so low that playing limbo becomes impossible.

How else do we explain seeing the child of a clearly corrupt, exiled dictator, a glorified photobombing assistant, an unqualified ex-cop, and a boxer who has no legislative accomplishment whatsoever occupying positions in the Philippine Senate?

If it means anything, those who lead in the surveys featuring prospective presidential and vice presidential candidates months before the elections failed to win recent polls. Manny Villar led the surveys in 2009, and he ended up finishing third the following year. Grace Poe and Jejomar Binay also frequented the top spot early in their bids, and neither was even the runner-up in the 2016 elections.

While the circumstances change every six years, the sociopolitical climate of our country is significantly different than it was before. Misinformation continues to run roughshod in many media platforms, despite public outcry for action. The COVID-19 pandemic and its impacts may not be ending soon, based on recent reports.

What has not changed is the obvious rhetoric: voters education. Given the poor state of the nation, voters must be reminded that the transformative changes they have been looking for cannot occur overnight, no matter what any candidate says. Instead, the 2022 elections present an opportunity to finally initiate these shifts towards a healthier democracy, resistant to corruption, rule-bending, and instability.

Do not vote for candidates who are spending millions of pesos prematurely campaigning, because it is in contrast to the character of a good public servant. Do not vote for a candidate without a clear platform and a good track record of governance just because their surname sounds familiar, they regularly appear on television, or you saw them doing charitable work that one time.

More importantly, we need to educate voters that their political power is not limited to casting their votes every three or six years. We must show the marginalized and vulnerable communities that they can form or support grassroots activism organizations and empower them to fight for their collective interests. We need to show that pressuring our government leaders to deliver the right types of reforms is a much better option than either suffering in silence or being blind sheep.

Then again, Filipinos just love being spectators of a soap opera while waiting for someone to save them, don’t they? If the COVID-19 pandemic that fully exposed the incompetency of the Duterte regime and other trapos cannot trigger the right kind of change the Philippines needs now more than ever, perhaps nothing will. Maybe except the climate crisis, but do we want that? – Rappler.com

John Leo is a climate and environment advocate and a citizen journalist. He has represented Philippine civil society in regional and global UN conferences since 2017. He is also a Climate Reality Leader.