[OPINION] The legend of Fr. Joaquin Bernas and his legacy of infinities Facebook Twitter Copy URL
Copied
'Cura personalis is the Ignatian principle of care for the entire person. Fr. Bernas never had to preach cura personalis. He practiced it to perfection.'

If there is one word that could best describe the extraordinary life of Fr. Joaquin Bernas, SJ, it would be this: vocation. Every milestone in his life has been about the preparation for and fulfillment of that vocation. He dedicated his entire life to the service of others – a path that he always recognized as having been chosen by God. In one of his succinct homilies, Fr. Bernas shared: “Vocation is a word which we sometimes reserve for a call to convent life or priestly life. It is not that way at all. Vocation is for all, yes, even for rascals. God singles out each one of us for a task.“

Accordingly, and after committing himself to the Jesuits, who directed him to become both priest and lawyer, Fr. Bernas happily found himself in the service of his religious vocation as a Jesuit priest, in the service of his patriotic and civic duty as a constitutional lawyer and scholar, and in the service of his academic passion as a law professor and educator – roles which he lovingly fulfilled up to the very last beat of his heart.

In omnibus amare et servire Domino. In everything, Fr. Bernas loved and served the Lord through the fulfillment of his vocation. His life was generosity personified.

Fr. Bernas was first and foremost God’s good servant. In everything he did, Fr. Bernas always placed God at front and center. For every role he performed, for every constitutional provision he framed, for every social advocacy he supported, these Ignatian principles were always present: (1) finding God in all things; (2) cura personalis; (3) courage, reflection, and action; (4) magis; and (5) Jesus Christ.

That certainly explains one of the best traits of Fr. Bernas: how he could deepen everyone’s faith through crisp and provocative homilies 3 to 5 sentences long, lasting no more than 5 minutes.

When Fr. Bernas helped frame the 1987 Constitution, he ensured the protection of the Filipino people’s fundamental liberties against government abuses through the Bill of Rights and the system of checks and balances. That was his own way of saying “NEVER AGAIN” to the abuses during the Marcos dictatorship. Thus, during the constitutional deliberations, Fr. Bernas eloquently said: “The protection of fundamental liberties is the essence of constitutional democracy. Protection against whom? Protection against the state.”

Another important constitutional contribution of Fr. Bernas are the concepts of social justice and human rights, which for him was the state’s obligation of caring for the people through no less than constitutional guarantees. He never stopped supporting social justice programs and human rights initiatives dedicated to help the marginalized, disadvantaged, and exploited sectors in the country. 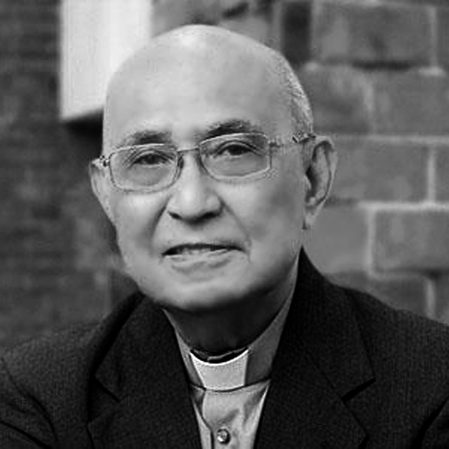 Being the gold standard in Constitutional Law, Fr. Bernas was the Supreme Court’s perennial amicus curiae, who served as the towering beacon of light whenever challenging constitutional issues puzzled the Court. He continues to serve as that North Star for the Court, as evidenced by the countless citations of his books and references to his constitutional deliberations in the Court’s decisions.

Fr. Bernas was also a gifted writer. Not only did he write authoritative commentaries on Constitutional Law, he also did not mince words whenever he made critical comments about a sitting president and the burning political issues of the day.

In all his words, Fr. Bernas never failed to show the elegant simplicity of his thoughts and the sophisticated clarity of his insights, which reduced complex constitutional issues into a single-minded truth that everyone could understand and accept.

Short of worshipping him, people respect and adore him, and are in awe of his brilliance and excellence. People love him, especially his students. That, despite them trembling in fear whenever he started calling them for recitations, which were then made even more memorable with his wry wit and charming smile.

Ateneo Law School Associate Dean Maita Chan-Gonzaga best described the recitations with Fr. Bernas: “He was also terrifying in the sense that you don’t want to disappoint THE Fr. Bernas, so it made you try harder in his class.”

But beyond the classroom, one of the greatest gifts of Fr. Bernas was how well he personally connected with the students. He genuinely cared about them. He treated everyone fairly. It didn’t matter if you were the top student in his class or the batch, or someone who was just struggling to get through law school. He would give anyone the time of day.

Cura personalis is the Ignatian principle of “care for the entire person.” Fr. Bernas never had to preach cura personalis. He practiced it to perfection.

Man for all seasons

Underneath the accolades and accomplishments, Fr. Bernas was still human. This Bicolano also knew how to enjoy the worldly things that life had to offer. He loved his whiskey (Blue Label). He enjoyed traveling abroad with his colleagues. He also loved music (MP3 collections) and movies (he enjoyed romantic comedies, among others, and once highly recommended Something’s Gotta Give). He especially loved hanging out with students over meals and/or drinks.

Be it “Fr. B” to his students and colleagues or “Bernie” to his Jesuit brothers or “Quining” to his family, he was truly once in a generation and a man for all seasons. As it stands now, he is the GOAT (Greatest of All Time) in the annals of Ateneo history and in Constitutional Law – his accomplishments unrivaled, his legacy unequalled, and his legend unparalleled.

Aside from his scholarly writings, the legacy of Fr. Bernas equally lies with the very people whose lives he touched. We absorbed the best of what he had to give – his light above all – as a Jesuit priest, Filipino, constitutional scholar, law professor, colleague, friend, sibling and uncle to his family, and as an Ignatian brethren to his Jesuit brothers. Bits and pieces of Fr. Bernas are in all of us. And there’s so much love in that. He cared so much that he gave one of his best gifts during his lifetime: hope.

That seed of hope is exactly what makes the legacy of Fr. Bernas transcendentally important – for us to carry his light forward to countless generations beyond, by sharing everything he stood and fought for, everything and everyone he cared about – all of which are now inside us as the echoes of those infinities.

We are the legacy of Fr. Bernas. And with all our feeble minds, let’s always find hope and strength in that – one tomorrow at a time. – Rappler.com

Eugene T. Kaw was one of the feeble-minded students of Fr. Joaquin Bernas, SJ in Constitutional Law 1 and 2, as well as in Public International Law. He is now a law professor at the Ateneo De Manila University School of Law, Ateneo de Manila University John Gokongwei School of Management, and FEU Institute of Law. He named his son Joaquin after the legendary Fr. B.

This piece was originally published in The Diarist.