[OPINION] Novax Djocovid and the Land Down Under Facebook Twitter Copy URL
Copied
'Despite the rich and powerful feeling as if they are above the law in many countries, including the Philippines and the US, Australia chose to uphold their law'

The world recently received a lesson in the basics of immigration law, as the world’s No. 1 tennis player, Novak Djokovic, left Australia after having his visa personally canceled by Australia’s Immigration Minister, Alex Hawke. Hawke used his virtually unlimited ministerial power under Australia’s Migration Act to cancel the tennis star’s visa for the public interest of Australia, saying that Djokovic’s presence posed a risk to the health and good order of the Australian community.

For everything else, there’s Mastercard

What is a visa? Aside from being a brand of credit card, a visa is typically a stamp in your passport. You apply for it through an embassy or consulate, and it usually grants you permission to enter a country temporarily, for a specific purpose. Tourism is probably the most common type of visa, although student and working visas are common as well.

One key thing about visas – they don’t guarantee you entry. They only allow you to present yourself for inspection at the border. Most countries’ border officers have almost absolute authority to allow or reject entry for people on visas. Australia is famously strict about their border, and has become even more strict in the time of COVID. In contrast to, say, America, where citizens and lawful permanent residents have the constitutional right of travel (thus making them exempt from all travel bans), Australia, like the Philippines, has even limited the entry rights of its own citizens during the pandemic. On January 4, 2022, Djokovic tweeted that he was going to Australia for the Open with what he called an “exemption permission.” Although he did not elaborate in his tweet, he claimed to have tested positive for COVID on December 16, 2021 (after also previously being infected in June 2020). Rather than claim a religious or medical exemption, Djokovic claimed that natural immunity from this more recent infection qualified him for an exemption. Two independent medical panels, from Tennis Australia and from the Australian state of Victoria, apparently approved his medical exemption for a visa on those grounds.

Earlier in 2021, Australia had accepted some unvaccinated travelers, provided they served a 14-day quarantine upon arrival. Being an island nation, Australia had largely avoided the brunt of the coronavirus pandemic in the past two years, and had seen many TV and movie productions move there as a result. However, on October 31, 2021, Australia announced that only fully vaccinated citizens, permanent residents, and temporary visa holders could enter. Unvaccinated people could apply for a travel exemption based on limited medical grounds. The Australian Department of Health specifically noted that previous COVID-19 infection did not count as a medical contraindication for a travel exemption.

Unlike the Philippines, which is a unitary presidential constitutional republic where the President serves as both the head of state and the head of government, Australia is a federation of six states and two self-governing territories, each with its own governments, parliaments, constitutions, and laws. Similar to the US, the Constitution of Australia establishes three arms of government – Parliament, which makes the laws; the Executive branch, which carries out and enforces the laws, and the Judicature (or Judiciary), which has the power to interpret the laws and judge whether the law applies in individual cases.

Although individual Australian states, like individual Canadian provinces, have some say in terms of temporary or permanent resident visas, the border is ultimately guarded, and the laws enforced, by the federal government. Thus, even though the state of Victoria initially approved Djokovic for a medical exemption, this determination did not trump Australia’s federal government, and its Border Force, the power to inspect individual travelers and enforce the laws.

When Djokovic presented his documents at the border, the Australian Border Force officer rejected his entry. Normally, this would have been the end of it, but because of his power and fame, Djokovic was allowed an emergency appeal. Instead of the luxurious apartment he had rented for the Open, he was detained at a notorious hotel where some asylum-seekers have been detained for almost a decade. 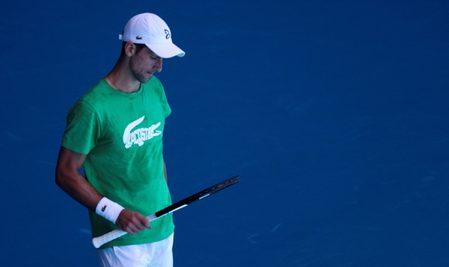 What more could he have done?

After an initial hearing, the judge decided that the Border Force erred in procedure by not allowing Djokovic access to a lawyer during his interrogation at the border. Despite this access to a lawyer or right to appeal a border adjudication not being a right regularly allowed in any country in the world, the judge reinstated Djokovic’s visa, musing, “What more could he have done?”

Despite the judge’s preoccupation and agitation over that question, there were some obvious things that Djokovic could have done. First, he could have complied with Australian law and common sense and gotten his two shots. Secondly, he could have chosen to stand upon principle and skip the Australian Open if he couldn’t legally enter the country. Third, he could have been a little more honest and proactive.

Djokovic allegedly tested positive for COVID on December 16, but was photographed mask-less the very next day with children at an event. He also sat for an in-person interview with a French newspaper, L’Equipe, mask-less as well. Despite his strange beliefs that the mind could cleanse even polluted water, he was traveling internationally, and should have respected the law. Another issue that came up was that instead of quarantining for 14 days (or even one), he traveled between his native Serbia and Spain in December 2021, and did not acknowledge that on his border declaration for Australia. While I am not an expert in Australian law, a similar offense – misrepresentation to a government official in the pursuit of an immigration benefit (entry), would be textbook immigration fraud in American law, which can have serious consequences.

We do know that deportation from Australia usually carries a three-year ban, although the ministry of immigration can forgive or shorten the ban based on Australia’s national interest (Djokovic doesn’t have an Australian spouse or partner for compassionate grounds to apply.) His pursuit of the most Grand Slam titles in history may also be imperiled by the UK’s quarantine requirements for unvaccinated travelers, the US’s current policy that non-immigrant visitors must be vaccinated, and the French president’s stated desire to make things more and more difficult for the unvaccinated.

What’s the overall lesson here? Despite the rich and powerful feeling as if they are above the law in many countries, including the Philippines and the US, Australia chose to uphold their law. Considering the overwhelming Australian sentiment against Djokovic, and the public interest, the Australian minister of immigration exercised his power to revoke Novak’s visa and put him back on a path to deportation.

Despite a spirited appeal by his lawyers, Djokovic lost his second emergency appeal before a full panel of three Australian judges, who upheld the minister’s powers. Down under, at least, even the world’s No. 1 tennis player is not above the law. Even his supposed COVID infection is a bit suspicious. German publication Der Spiegel investigated the QR codes linked to Djokovic’s COVID tests, and found some inconsistencies in the numbering and even the results.

The bigger lesson though, especially for the rest of us who don’t have the juice to command international sympathy or inspire protests from their own government’s head of state, is that international travel rules are constantly changing, especially now as governments react to the COVID pandemic. Before any international travel, we should check not just our passports and visas, but the rules in every country that we plan to transit or travel into, which may include vaccination requirements, testing requirements, and required quarantines.

These rules change so fast that I’m not even going to quote any of them – if you’re internet-savvy enough to read Rappler, you can probably Google travel requirements, and if you’re a boomer who got forwarded this article, you can probably find a millennial or zoomer to Google them for you. It might not even just be internationally – the Philippines is soon going to implement no vax, no public transportation even locally. Those who root for the return to power of the dictator’s son should also be wary what they wish for – as the Oxford educated (but not graduated) potential president doesn’t support mandatory vaccination, but does support “no vax, no ride.”

It’s not hard to imagine an even more locked down Philippines in the near future. The Philippines has had fewer COVID cases than individual American states, but has a much stricter lockdown. Like Australia, we have even limited the return of our own citizens and balikbayans, and it wasn’t that long ago that healthcare workers, even with valid contracts, were barred from leaving the country. International travel may never be the same because of COVID, but one thing’s for sure – immigration laws are not to be djoked around with, no matter who you are.

Jath Shao is a friendly neighborhood immigration lawyer who helps families and individuals navigate the US immigration law system, because he was once like them. Originally from Manila, Jath serves as the Central Region Governor for the National Filipino American Lawyers Association, writes about immigrant and immigration issues for Rappler, and is currently undefeated in family, criminal, and immigration court.