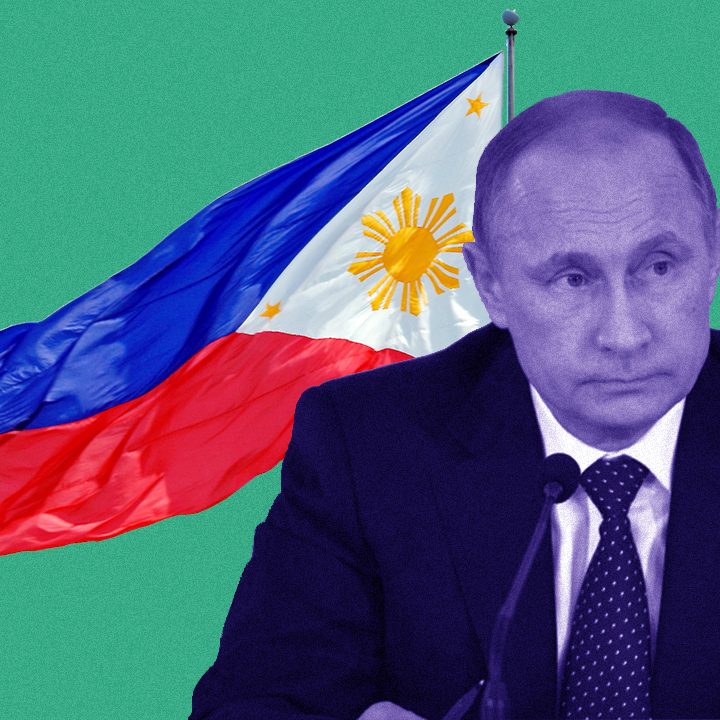 Facebook Twitter Copy URL
Copied
'While Duterte is indeed energetic whenever getting in touch with Putin, it is hard to say for the latter'

It is public knowledge that since becoming president in 2016, Rodrigo Duterte has attempted to “pivot” Philippine foreign policy not just to China but also to Russia. The Filipino populist leader made several attempts to reach out to his admired Russian leader, President Vladimir Putin. It first began to take momentum on the sidelines of the 2016 Asia-Pacific Economic Cooperation (APEC) Summit in Peru.

Since then, various views have painted different pictures about the upgraded bilateral relations between Manila and Moscow. Some argue that this vigorous outreach to Russia breaks the Philippines away from its overdependence on the American-centric lens, thanks to Duterte’s enthusiasm. Others point out that though the relations were quite proactive in the Duterte presidency, its overly personalistic touch would hardly sustain its momentum once Duterte is out of office.

Both views are only partially correct. While Duterte is indeed energetic whenever getting in touch with Putin, it is hard to say for the latter. If anything, Putin is not very vocal about Philippine-Russia relations. This is not to say that nothing happens productively. Just that it is ambiguous to conform to such an argument in understanding the dynamics of Philippine-Russian relations. Putin only announced its Pivot to Asia in 2012.

Meanwhile, it is premature to argue whether the Duterte administration, with only six years in office, can fully strengthen the full potential of bilateral relations. Moreover, while the Russians are subtle in their outreach to the Philippines, this does not mean that they are much less interested in sustaining it. Likely, the Russians will not let this momentum slide in their hands, especially when the United States and China are competing for influence.

How should we view Philippine-Russian relations, then? What elements are critical to understanding these underappreciated bilateral relations? The most viable approach we can utilize is to look at the international system. Indeed, scholars of international relations have pointed out that a systemic level of analysis provides only generalizations. But we can hardly find more empirical data to generate knowledge and insights about Russian-Philippine relations from a personal level and from state-level descriptions.

From this position, this article argues that Russian-Philippine relations will likely remain subtle but not any less stagnant even after Duterte gets out of office. The Indo-Pacific region continually transforms power distribution among states and reconfigures possible state behaviors. Both Moscow and Manila are likely to use their bilateral relations to hold a piece of the pie in securing their interests.

Russian leaders did not much underscore their country’s position in its Far Eastern flank for centuries. The Russian empire once tried to consolidate territories in the Pacific. However, it was more preoccupied with threats from Eastern Europe and Central Asia. It once kept an eye on the Spanish-held Philippines to establish a more permanent presence in the region. Eventually, with Madrid’s permission, Russia built an informal consulate in Manila led by a Russian-naturalized merchant Peter Dobell until the Russian Revolution in 1917.

The Soviet Union, although it influenced communist satellite states during the Cold War in the region, such as Vietnam, did not live long enough as it disintegrated in 1991. The Russian Federation today is no less different from its predecessors. It is a member of APEC, the Association of the Southeast Asian Nations (ASEAN) Regional Forum (ARF), and the East Asia Summit (EAS). By just reading its 2016 Foreign Policy Concept, these memberships indicate Russia’s desire to access the region’s prosperity and stability and contribute to their national interest.

The Philippines, meanwhile, seeks diverse sources of promoting its security and economic interests in the dynamic region. Its maritime geostrategic location makes the country enticing for commercial shipping and blue ocean economy on the one hand and vulnerable to violent extremism and great power competition on the other. Russia’s desire to make its presence felt in the region through naval diplomacy, arms trade, counterterrorism cooperation, and energy deals would surely make it a viable candidate to augment sources of achieving Philippine interests.

At the height of the Marawi siege in 2017, Russia’s Soviet-legacy ships arrived at the port of Manila to donate arms, munitions, and other materiel needed for counterterrorism. Before that, both countries inked various agreements, such as defense partnership, intelligence exchange, foreign ministries consultation, cultural exchange, transportation, science and technology, among others. In 2018 and 2019, Manila and Moscow made their first-ever deployment of defense attaches, respectively, signaling their commitment to work on military-technical issues.

Some analysts pointed out that these deepening ties, particularly in defense, is a wake-up call for Washington not to understate its potential for its implications on its security alliance with Manila; yet some warned to keep things in sober perspective. Undeniably, Duterte’s anti-Washington rhetoric culminated in the near-abrogation of the 1998 Visiting Forces Agreement (VFA) in 2020, but this was soon effectively canceled during US Defense Secretary Lloyd Austin’s visit to Manila in July 2021. Now that the security alliance is here to stay, the question is whether or not Russia would be relegated to the sidelines.

On the 45th anniversary of their bilateral relations, Moscow and Manila expressed the potential to work on various sectors. Aside from defense, both extended talks on COVID-19 vaccines, energy, as well as space cooperation. So far, presidential candidates for the 2022 National Elections only highlight foreign policy platforms on Philippine interests in the West Philippine Sea amid the Sino-American rivalry. If there is anything about the systemic power configurations that occurred during Duterte’s presidency, multiple sources of support for promoting Philippine national interests are possible.

It will remain unlikely for Russia to take sides in the South China Sea disputes since it can agitate both US and China. While China would certainly keep an eye on Russian activities that may hamper its quest for regional hegemony, the US is likely to underestimate Russian aggregate capability to co-opt states in the Indo-Pacific like the Philippines.

Whle Moscow, in its newly published 2021 National Security Strategy (NSS), may seem to be dismissing the Indo-Pacific concept as Washington-centric, it cannot deny the reconfigurations occurring in this vibrant region. Rather, it would look for a more flexible version of the concept as Japan, India, and ASEAN did. The likely implication of this spectacle is the need for both officials in Manila and Moscow to know what exactly their interests are amid the seismic shifts in the region.

Modest assessment in the abovementioned does not in any way dismiss the potential of Philippine-Russian relations. Russia’s limited, but not necessarily marginal, activities in the region, specifically with Manila, would compel Moscow to remain silent to achieve its interests there. Taking a systemic perspective would indicate the complexity of the continually transforming Indo-Pacific for the years to come. – Rappler.com

Joshua Bernard B. Espeña is a resident fellow at International Development and Security Cooperation (IDSC), a policy think tank based in Manila. He teaches Political Science and International Relations at the Polytechnic University of the Philippines and University of the East. He researches on issues on naval warfare, grand and military strategy, great power politics of the Indo-Pacific, ASEAN and Russian Studies, and Philippine strategic culture.