My brother Carlitos, two years my junior, drowned when he was 4 years old. Although this happened 66 years ago, it is a cross I have had to bear all my life.

Death was not a strange event for me as a child. I witnessed countless funeral processions as we lived only a few meters away from the Vigan town cemetery.

I can recall deaths of young people in our immediate neighborhood. Iscabeng Andia, my classmate Paul’s younger brother, was run over by a speeding jeep at the age of 3. Sayong Francisco, a distant cousin and the newspaper boy who brought us our copy of the Ilocano weekly magazine Bannawag every Wednesday, was bitten by a rabid dog in his early teens.

I was frightened by stories about children being kidnapped and their blood used to “fortify” the Quirino Bridge in Banaoang, Santa, Ilocos Sur, built in the early 1950s.

One time I chanced upon an autopsy taking place in the cemetery. The diggers had exhumed the body of a young girl, someone I knew who was two years ahead of me in school. She had died suddenly. She was doing a twirl in front of members of her family when she collapsed. I remember that the family blamed her death on the family doctor, the reason for the autopsy.

Probably one reason I went back to school in midlife to take up a master’s degree in counseling psychology was to understand the nature of grief as trauma, especially for young children.

I tried many interventions. I once asked Father Jaime Bulatao, the eminent Jesuit psychologist who was my hypnotherapy teacher, to do a regression session with me so I could experience seeing my brother alive once again. I did see Carlitos alive, in a dinner scene where all the members of our family were present – a wonderful gift from the unconscious.

I also participated in an automatic writing session where, in an altered state of consciousness, I channeled a letter from him. “Remember how we used to build sandcastles under the house when they were building the fishpond? You, my dear sister, are going to build metaphorical castles.” I wanted to believe him, this little boy, this love of my life, who I felt had abandoned me in my tenderest years.

I have attempted to tell the story of my younger brother Carlitos’s death in at least a dozen forums in the last 40 years. Not once have I succeeded at it without a meltdown. It has been a constant source of embarrassment for me because I can’t even get halfway through the story before I completely lose it.

In the midst of deep grief, a scholar writes how Hindu rituals taught her to let go 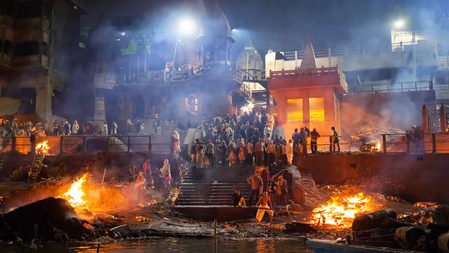 Someone once said there isn’t a family on this earth which has not been touched by grief. My family has certainly not been spared. We have had our fair share. When I was working on my mother’s side of the Family Tree, I discovered that 5 of her siblings (Clara, Jesus, Gregorio, Ernesto, and Benjamin) had died in infancy, and a sixth (Salvacion) succumbed to asthma in her teenage years. It must have been an unending nightmare for my grandparents, my mother, and her 7 siblings who had reached adulthood.

My mother’s eldest sister, Epifania Arcellana, who had 18 conceptions, lost two daughters in infancy (Josefina and Concepcion) and a third (Victoria) perished from illness as a teenager. Her son Franz, a National Artist, immortalized these deaths in two of his short stories: “The Mats” and “The Flowers of May.”

From “The Flowers of May”:

His grief is terrible and deep.

It is as terrible as the naked terror stark in Mother’s eyes and deep as the new knowledge and first and final and only wisdom that we have just now begun to share. So this is death. So this is what it means to die.

Sven Birkerts in his book The Art of Time in Memoir writes: “Psychologists often talk of the “repetition compulsion” — the process whereby an individual keeps symbolically reenacting a distressing situation, hoping to master it, to get it right, and to be free of it. It’s no stretch, I think, to see the work of these memoirists as a purposefully undertaken repetition, the goal being comprehension and exorcism: psychological control. However different the nature of the trauma itself — what the writers share in common is an impulse to represent the overcoming of the wound, whether through repair, reconciliation, or redemption.”

My brother’s death was a full-length movie that kept playing and replaying in my mind for a long time. It was a movie I could never view dry-eyed — until January of this year when I finally sat down to write the definitive story about his death as part of the requirements for a Deep Memoir writing course I was taking with 11 other writers. I wrote and rewrote, revised and kept revising. I cried every time I read my story until I could cry no more.

“When Carlitos drowned, I truly believed that Jesus would bring him back to life. I was 6 years old and had just passed first grade at the time. I had already received my First Holy Communion, one of only half a dozen in my Grade 1 class to do so. I had learned from my Religion class that Jesus had brought back Lazarus to life when Lazarus’s sisters Mary and Martha begged Him to do so. I prayed to God with all my heart and trusted Him to hear my prayer, to grant my request. I had full faith that all prayers were answered.

“I learned to read early and I wish now that I had not known then of the story of Lazarus. Had I never read the story, it would have been easier for me to accept Carlitos’s death.”

I let my granddaughter read my story and I was heartened when she said — “It is a sad story, Lola, but it is not heavy on the heart.” – Rappler.com

Bernardita Azurin-Quimpo is a writer, psychologist, and farmer. She is an independent consultant and has worked with educational nonprofits running scholarship programs. She is now semi-retired and spends her time developing a forest garden in Kidapawan City, North Cotabato.

Her story on her younger brother’s death, entitled “The Movie In My Mind,” is one of a dozen memoirs in an anthology — Vessel of Voices — that will be virtually launched on Saturday, December 12, from 10 to 11 am.