[OPINION] ‘Turning Red,’ and growing up beyond my mom’s shadow Growing up in a time of Tumblr, boy bands, and heavily filtered Instagram posts, all I wanted at 13 was to be seen by the world for the adult I (thought I) was. I was self-proclaimed “ready” to begin my journey into adulthood as I entered high school with the added –teen to my age, to shake off any bit of the sheltered childhood I had.

That was nearly a decade ago. So when Pixar’s newest feature, Turning Red, came out last weekend, I was floored by how quickly the movie whipped me back in time — to the naive high school freshman who was too eager to grow up.

For those of you who haven’t seen it yet, Turning Red tells the story of Meilin Lee, a newly-turned 13-year-old from Toronto. With adolescence freshly upon her, Mei is just like every other teenage girl: she loves her best friends and hit boy band 4*TOWN (her mom comments on them: Why 4*TOWN when there are five of them?, and that hit a little too close to home). But she has crushes on average-looking boys, too (been there!) — even doodles about them in her algebra notebook. 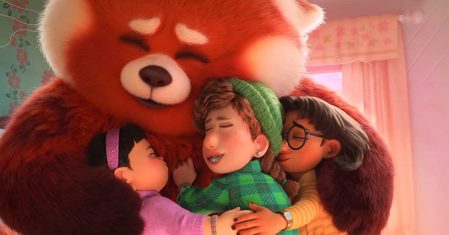 “I’m 13 now, and I make my own moves!” Mei exclaims triumphantly…only to backtrack with a bashful confession: “It just so happens some of my moves…are also hers.”

Hers, here, referring to her mom, Ming. We see how Mei grew up being her mother’s golden child; they cleaned their family temple together, watched the same shows, and Ming would be absolutely delighted whenever Mei brought home stellar grades (“Today, honor student; tomorrow, UN Secretary General!”). But Ming frowns and scoffs at the sight of 4*TOWN on the television, and blames the people around Mei whenever she comes close to straying from the perfect path — and Mei, so afraid of losing her mother’s approval, cowers and hides behind the perfect child image she’s been trained to be.

From the get-go, it’s clear that Turning Red isn’t just a movie about a girl growing into herself once puberty peaks; it’s a story about how these changes, and this growing, can affect one of a girl’s most intimate relationships — the one she has with her mother. Beyond its fun and vibrant animation and the very catchy soundtrack (thank you, Billie Eilish and Finneas!), Turning Red just wouldn’t be a Pixar movie if it didn’t have me sobbing uncontrollably by the end of it.

See, when I was 13 years old, I liked a boy; my mom did not like said boy. This was the source of many arguments and slammed doors, of disapproving comments and eye rolls (on my end in particular). What did she know? I would think to myself; I would whine about it to my friends. I can make my own decisions now! I felt like I had never disappointed my mom in anything: I took piano lessons for years, graduated with honors from my elementary school. Mei’s rant to her friends rang very clearly in my ears with an eerie sense of deja vu: If they don’t trust us anyway, what’s the point?

The boy problems (or this boy problem in particular) stopped, although it did take quite a while (and she had been right about him, even if she never said I told you so). But that wasn’t where our disagreements would end. Whether it would be about where I’d go to college (I wanted to go to UP; she was pushing for Ateneo), or if I was spending too much time out with my friends, or a comment I (or she) would take too personally, our personalities had become too similar over the years that they would clash — and clash quite messily. But growing up is messy, Turning Red likes to remind us. It’s complicated, and brutal, and sometimes embarrassing — but all these parts are necessary when you’re trying to figure out the path to who you are. Even if the person you are is far from who you, your mom, or anyone thought you would be.

My relationship with my mom has mellowed since my teenage years, but that period of my life has arguably shaped a lot of who I am. One of my favorite movies is Lady Bird, which tells the story of an equally complicated mother-daughter relationship. My directing and thesis films in college were wrought with my own experiences with my mom, and learning how to grow up beyond someone else’s shadow (even if I had made the shadow out of my own expectations).

(I had interviewed my mom for my thesis film, and asked her what she appreciated about our relationship. “I like that we don’t agree sometimes; that we can be different.” she had said then. “That you are a woman with your own thoughts on how the world is.”)

Towards the end of the film, Mei confesses to her mom something I wish I had told mine years ago. “I’m changing, Mom. I’m finally figuring out who I am…but I’m scared it’ll take me away from you.”

Ming looks at Mei and smiles. “The farther you go, the prouder I’ll be.”

(“Siyempre we’re worried, ‘no, as parents it’s hard not to be.” My mom sighed, smiled. “At the end of the day, we just want to know you’re alright.”)

Then I cried. Just like my mom did. – Rappler.com

Yumi Pascual Paras is currently a law student (yes, by choice!) at the University of the Philippines with a Bachelor’s degree in Film. Her poetry has been featured in both local and international publications.