The nature of a concurring opinion is that it wishes to further elaborate on and add to the main opinion, without necessarily contradicting the latter or qualifying the justice’s agreement with the reasoning (ratio decidendi) behind the conclusions contained therein.

The significance of Sereno’s and Leonen’s concurring opinions is that, together with the singularly brilliant opinion of Jardeleza, they provide a powerful framework on the status of the law on the citizenship of foundlings. From hereon, there can be little doubt in our jurisprudence on the formidable basis for the natural-born status of foundlings.

The Perez ponencia started the arguments regarding the citizenship issue on the near improbability that a child born in the Philippines is a foreigner. Around the time Poe was found in a church in Jaro, Iloilo, only .45% of Iloilo’s population were foreigners, while 99.55% were Filipino. Accordingly, this would indicate “more than ample probability if not statistical certainty” that Poe’s parents are Filipino.

This was followed with a discussion on the deliberations of the 1935 Constitution, where the majority opinion concluded that any extra provision in said Constitution on the citizenship of foundlings was deemed unnecessary by the drafters because of the assumption that international law already considers them citizens of the country of their birth.

The third argument is the treatment of foundlings under our adoption laws, where only Filipino citizens can be the subject of adoption, because jurisdiction over the status of a person is determined by his or her nationality. It has been consistent state policy that the state has jurisdiction over the adoption of foundlings. This state action represents a long-standing presumption in our bureaucracy that foundlings are Filipinos, in the same way that they were, without question, always issued Philippine passports, and not travel documents as stateless persons.

Of 189 countries surveyed, 166 consider foundlings as citizens. The state of the individual laws of nations all over the world, which treat foundlings in their respective countries as citizens – in addition to the various international conventions and treaties that deal with the rights of children and statelessness – is sufficient to already consider the same as a generally accepted principle of international law, so as to form part of the law of the land under the doctrine of incorporation.

On the international law aspect of the case, Sereno complements the ponencia, in that foundlings as citizens of the country of their birth already exists in international law as a customary norm. Accordingly, “contemporary developments indicate that [the] powers [of the individual states to determine who their citizens are] are now ‘circumscribed by their obligations to ensure the full protection of human rights,’” i.e., insofar as recognizing the equal protection of foundlings under the law is concerned.

Sereno cites the data on the number of countries adopting the principle that foundlings are citizens, which in turn, was adopted by the ponencia as part of its basis for the same conclusion. 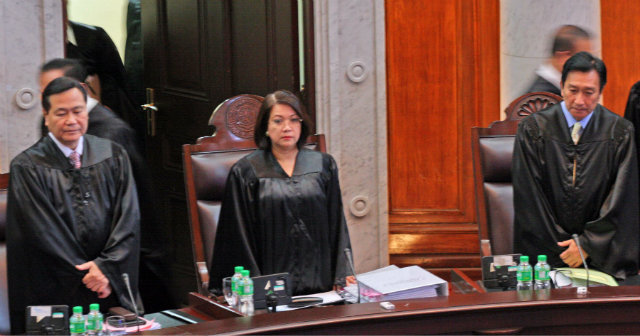 But for those with disputable paternal origins, filiation need not even be proven by DNA, but only through birth records, a written admission from the claimed father, and other acts, declarations, and family reputation or tradition regarding one’s pedigree, things that a foundling cannot possibly show.

Sereno adds that contemporaneous and subsequent construction by the state’s instrumentalities shows its consistent policy to treat foundlings as citizens. She cites several jurisprudence on the matter, specifically in adoption cases, thereby reinforcing the ponencia’s discussion on how that part of our bureaucracy that deals with foundlings never for a single instance treated them as stateless persons. (READ: SC must do justice to foundlings like Poe)

The classic example of course is Grace Poe herself, who was legally adopted under Philippine laws on the adoption of Filipinos, issued a Philippine passport by the DFA, and subsequently repatriated under the Citizenship Reacquisition Act by the Bureau of Immigration.

That is, of course, until the Comelec decided, single-handedly, to overturn this state policy, effectively declaring Poe and all Philippine foundlings stateless persons.

If throughout a long period of time, state instrumentalities have been treating foundlings as citizens, until one decided to run for president, does not the sudden turn-around in state policy reflect a political, rather than a purely legal, complexion in its disposition?

Leonen said as much when he pointed out that scattered in various portions of the Comelec resolutions is a salient hostility against Poe. According to him, “the Comelec went out of its way to highlight supposedly damning details” against Poe, such as the circumstances of her husband and her alleged “frequent” trips to the US before her 2006 repatriation. The election tribunal conveniently omitted that Poe’s husband is a natural-born Filipino, and that the “frequent” trips to the US consisted all of two trips.

Leonen also highlights the error of the Comelec in shifting the burden of proof to Poe, without requiring the petitioners at the Comelec to show proof that of the more than 99% of the 1968 population of Iloilo consisting of Filipinos, Poe just happened to have been born to a less than 1% foreign segment. This is where the crucial point raised by Jardeleza comes in.

There are only two conclusive presumptions under the Rules of Evidence. The first one represents the principle of estoppel, in that no one can be allowed to falsify a thing that he represented to be true. The second is that a tenant cannot deny the title of his landlord. The Comelec, and of course the Court dissenters, therefore added a third. Foundlings are not natural-born citizens, even if there is a more than 99% chance that they are, simply because of the impossibility of knowing who their parents are.

Here lies the unfairness of the Comelec position. By requiring DNA evidence to establish Filipino parentage of foundlings, the Comelec has raised the quantum of evidence in administrative proceedings exponentially, from mere substantial evidence, to more than that of moral certainty and proof beyond reasonable doubt, which is demanded only in criminal proceedings for the conviction of the accused. More than proof beyond reasonable doubt, the Comelec required absolute scientific certainty.

According to Jardeleza, this cannot be so, because “tribunals do not deal in absolutes." The determination of facts is but a weighing of probabilities. Absolute scientific certainty is never the quantum of evidence in any administrative or judicial proceeding. By placing foundlings in a different class from children who know their parents, by making it even harder for them than it already is to prove their natural-born status, the Comelec has violated the equal protection clause of the Constitution.

As a minority whose first experience of the world is one of utter abandonment, foundlings have no other parent but the state itself. And it is the worst parent possible whose very first compulsion is to declare his child stateless, without any rights, without any nation, without a people. No state policy can justify such a cruel and inhuman discrimination of the most unfortunate of minorities.

Jardeleza applies the strict scrutiny standard in assailing any prejudiced government action against foundlings. As a discrete and insular minority entitled to utmost protection against unreasonable discrimination, foundlings should be the very first to be protected, instead of being subjected to impermissible majoritarian prejudice, more so if the same is perpetrated by the state itself.

It is not entirely inaccurate to go as far as to characterize such prejudice against foundlings as acts of hate.

In the end, the citizenship issue in the Grace Poe case was resolved not so much on the basis of novel principles or groundbreaking legal scholarship on what the constitutional provision on citizenship could have meant, or was intended to mean, inasmuch as it was rather also settled based on the simple and unobstructed application of the rules on evidence, rules that were precisely laid down because it is most often the case that judicial controversies are not determined based on conclusive proof, but on presumptions, probabilities and circumstances on the likelihood or impossibility of a contested fact. This is the result of an objective approach to a case that was heavily politicized from the very beginning.

Once removed, the political lens that colored our opinions on this case enabled us to see once again what state policy has always been on foundlings, that they are as natural-born citizens of this country as any of us who are lucky enough to know our parents.

The years that we treated foundlings as one of ours – processing their adoption into families, issuing them passports, registering them to vote, enrolling them in our public schools – show us what we truly are as a nation. We are not that nation that suddenly casts them aside just because one of them decides to run for president.

As I have said before, when this case began, my only interest was to defend the rights of foundlings and global Filipinos. I am glad that the Supreme Court also saw it that way. This legal fight over Poe’s qualifications is over and she has won that decisively. Let's all move on to the elections.

I certainly have. Having engaged with her on the legal case and knowing her much better now as a result of that, I am fully convinced that Grace Poe is the best person to be president come June 30, 2016. Why I think and believe so will be the subject of another article nearer to the elections. – Rappler.com

Dean Antonio G.M. La Viña is an adviser to presidential candidate Grace Poe. He has served as the dean of the Ateneo School of Government since 2006.