Have you ever heard about a “constructed” language? Seems weird, right? Is it like a petty high school project or some thesis which found itself flying into the rubbish bin? Or those spoken with subtitles in Star Trek or in Game of Thrones as they talk sweet with their friends and harass their foes?

Believe it or not, they do exist. Some are minor, almost dead; some are living and growing strong. And they are being used every day, in many parts of the globe, ranging from decades to more than a century. One of them is Esperanto.

The Philippine Esperanto Youth (FEJ), the official organization that represents the Esperanto community in the Philippines, joins the solemn commemoration and celebration of July 26, 2014, as the 127th “Esperanto Day (Esperanto-tago)” or the date of birth of the language.

A ‘bridging’ language
Esperanto is a constructed international auxiliary language created to serve as a common “bridging” language to promote understanding and harmony between people with different mother tongues. Esperanto is described as “easy-to-learn,” “international,” and “neutral.”

Esperanto is a neutral language since it doesn’t belong to any specific country, race, or any specific entity, but belongs to everybody, especially those who learn it, regardless of background.

It is a language with regular characteristics. Its vocabulary is mostly derived from European languages. One pronounces the letters as he/she writes, thus there is no “silent” letter. Words are formed simply by putting affixes to root words, and have consistent letter endings. It also has regular grammar, with only 16 fundamental rules, as described in Dr. Zamenhof’s Fundamento de Esperanto (Fundament of Esperanto).

An advantage of Esperanto over other international languages is that it requires only around 150 hours to obtain sufficient knowledge, based on the research conducted by the University of Cybernetic Education in Paderborn, Germany.

“Saluton! Kiel vi fartas? Mi estas Maria (Hello! How are you? I am Maria),” one would commonly hear Esperantists, as users of Esperanto call themselves, tell each other at the start of their path of learning. They rapidly learn more useful phrases and join discussions of any nature soon after.

Esperantists hope that by using such language, humankind may finally attain mutual understanding and harmony so that enmity and conflicts arising from misunderstanding would finally cease.

Dr Ludwig Lazar Zamenhof was born on in 1859 in Białystok, in Russia-occupied Poland. He was a Jewish physician who specialized in ophthalmology, but was also a language enthusiast. 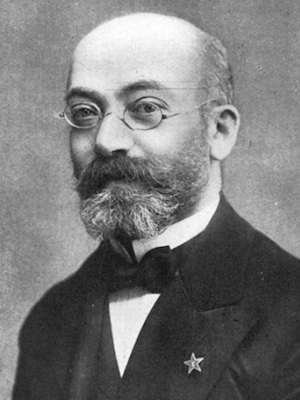 People of various ethnic backgrounds lived in disharmony in Białystok, often caused by their failure to understand each other since they spoke different languages. Thus, Zamenhof dreamed of creating a language that could bond people together and promote harmony in a community.

Zamenhof had many attempts to create an international language since his childhood. He wanted the grammar of his language to be complex and rich, but when he came across the English language and realized its complexity, he suddenly desired to create a language with simpler grammar.

He named his prototype Lingwe Universala (Universal Language) which he finished in 1878, but he was too young to publish it then. In 1887, his Unua Libro (First Book) first appeared in Warsaw, Poland, under the pseudonym “Doktoro Esperanto.”

Esperanto means “the one who hopes” from the verb esperi (to hope). The book was originally written in Russian but was later translated to different languages as its learners exponentially increased. Initially, the work was named Internacia Lingvo (International Language), but was then called Esperanto, owing to the popularity of his pen name.

Then and now
Since Esperanto was first published, Esperanto has become the biggest and most successful constructed language in history. Many found their passion in the language and fervently supported it. It is estimated that Esperanto currently has 200,000 to 2,000,000 learners and speakers worldwide.

In 1905, the First Universal Congress of Esperanto took place in Boulougne-sur-Mer, France, and the World Esperanto Association (Universala Esperanto-Asocio or UEA) was formally founded.

Its youth section, World Esperanto Youth Organization (Tutmonda Esperantista Junulara Organizo, TEJO) was first established in 1938. UEA and TEJO have consultative relations with the United Nations (UN) and regularly attend and follow its affairs. UNESCO passed a resolution that recommends Esperanto during its convention in Montevideo, Uruguay, in July 1954.

If there are many Esperanto supporters, there are just as many who have criticized and dismiss its ideas.

In early 1900’s, Esperanto was rejected from being a recommended language in the League of Nations when French-speaking nations, since French was the dominant language then, lobbied against it.

Adolf Hitler tried to dismiss Esperanto as a medium of communist powers and persecuted those who used it. Even the daughter of Dr Zamenhof, Lidja Zamenhof, who continued his father’s advocacies, succumbed to Nazi persecution in one of its concentration camps. No known direct descendant of Zamenhof survived.

In its 127 years of existence, Esperanto has evolved into an independent, rich, and living language. It possesses its own culture – it has its own literature, music. Many radio stations, news agencies, television programs, and films have carried the language. It is strange, but Esperanto even has its own flag and national anthem!

At least one Esperanto event takes place everyday, the biggest being the UK and International Youth Congress (Internacia Junulara Kongreso) of Esperanto. Every year, these two conventions take place in a different city, and bring together hundreds to thousands of participants from more than 120 countries.

Many websites offer lessons in Esperanto. The most popular of them is Lernu (learn).

Esperanto in the Philippines

The Philippines once had official contact with Esperanto, when the United Nations World Tourism Organization (UNWTO) recommended the use of Esperanto in industries, especially in tourism, in 1980 at a conference held in Manila. The declaration, known as “Manila Manifesto of 1980” was co-signed by then Philippine president Ferdinand E. Marcos.

The language remains largely unknown in the Philippines since then, but many attempts to start an organized movement and spread the language and its ideas in the country have been made in the past century.

Esperanto Asocio por Filipinoj (Esperanto Association for the Philippines, EAPF) was established in 2006, but its activity declined to nothing after some years. The latest is Philippine Esperanto Youth (Filipina Esperanto-Junularo, FEJ) which was founded on September 19, 2013 by 3 secondary school students.

FEJ aims to reestablish an active movement to reintroduce Esperanto and its ideas in the Philippines. The association is formally recognized and is in official contact with UEA and TEJO. More than 50 books and materials in Esperanto are found in the headquarters of FEJ in Valenzuela City. The Esperanto community in the Philippines has its own group.

Maybe Esperanto can be the solution to the ongoing mutual misunderstanding between people of different languages in the Philippines, if one were to choose the “lesser evil” between Esperanto and English. – Rappler.com