Facebook Twitter Copy URL
Copied
'The pharmacies are empty as well. Some pharmacies [have] broken doors and people have taken the pills.'

As war rages on, a Doctors Without Borders staff named Olexander Lishchynska* in Mariupol, Ukraine reports on the situation on the ground. Below is an edited transcript of a phone conversation with him, which took place on March 5, 2022.

In Mariupol, the situation today is a bit more quiet than yesterday. Yesterday it was really bad, with a lot of explosions all over the city.

We visited several of our friends today in Mariupol, and relatives, and we saw in different parts of the city the places where explosions happened. And it was even near a block of residential flats. We saw many buildings where glass was broken on the windows because of the shelling and explosions. Then there is another problem, a big problem with drinking water; we can’t find any anywhere.

We saw lots of explosions all over the city in different districts of Mariupol. Of course, there are some districts that are more heavily shelled and ruined. But even in the center, there are places where explosions happened.

There are no places where water can be found. People are looking for different options. For example, we saw in one block of flats that people were taking water from a heating system. The system was not working, so they would take the water from it just to wash hands or just for some very, very basic needs. Also, we saw people go to springs, like ground springs, to get some water. And we saw also in one place, a truck with water from UNICEF. But it was only in one place and there was a huge, huge queue of people trying to get this water.

There is nowhere to find bread, and in majority of shops and supermarkets, the products were taken by people who could not find food. Somebody would break windows or doors to the shops and the people who were near would just take some food. I also visited today the guest house [where] our staff [live]. They went to the market and they found a place where they could buy potatoes, and they were looking also for places where they could get some water, but I don’t know if they managed to find some or not. Later, we know that they tried to organize evacuations, but then these were canceled as well.

I don’t know anything about the state of the hospitals. I just know that the oblast*-level hospital of intensive care, located close to the western part of Mariupol, is where the battle comes closer and closer. Our neighbor used to work in the hospital, and she said that yesterday or the day before, there were incidents when projectiles landed on a private house close to this hospital. So it’s very close to that area where shelling happens. 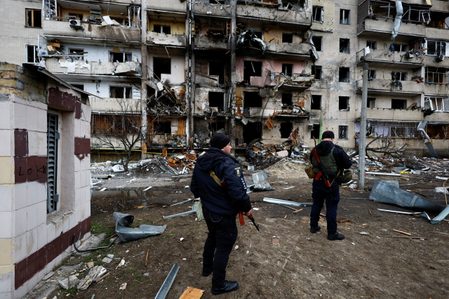 [But] what is happening now, we don’t know because we [are totally] cut [off from] information. We just receive text messages. There is no other information available for us. And it’s [like this] everywhere in Mariupol. [Phone signal] is working in [only] very few districts.

Now, there’s some electricity left in the power bank. It’s good maybe for one recharge [of the phone]. And we managed to recharge a bit when we were driving in the city. But of course, it will not be enough. Apart [from] this, there’s no other chance to recharge because [there’s] no more fuel.

Totally no fuel in the city anywhere. There’s no electricity, no heating, no water. In our flat we have gas. But in some parts of the city, gas [has been] cut already. In the left bank, which is severely impacted, there is no gas as well. – Rappler.com

Note: An oblast is a type of administrative division or region in Ukraine.

*Olexander Lishchynska (name changed for security) is a staff member of Doctors Without Borders.