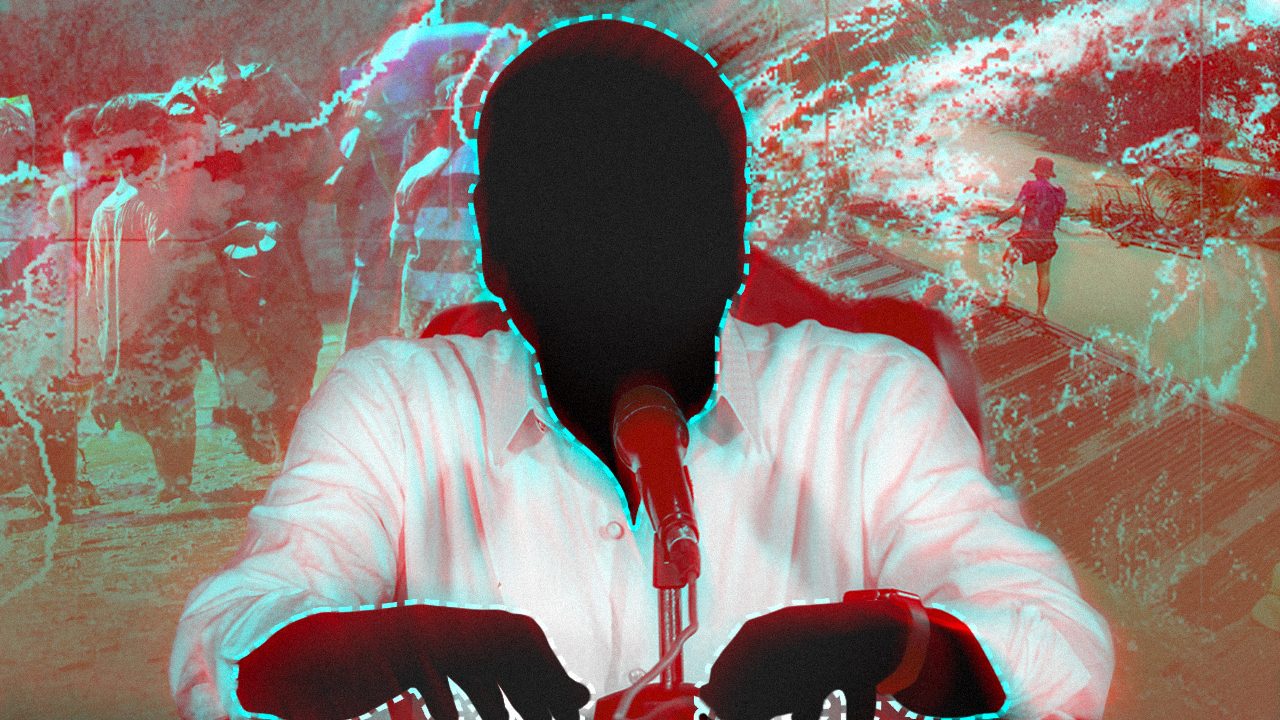 Facebook Twitter Copy URL
Copied
Presidents are not expected to swim in the flood. They're expected to be on top of actual emergencies.

A day after Typhoon Ulysses battered the country, the nation reacted with surprise at what was happening in Cagayan Valley. Cagayanons were desperately flooding social media with cries for help as the evening of Friday, November 13 came.

Online reports cited water coming from dams that were bursting. A harrowing video depicted a village swallowed by water at night, the darkness broken only by cries for help.

It took hours before a national, coordinated picture of what was happening could emerge. And for the third time this month, as citizens faced disaster, they looked to the top and found silence. The Vice President thus took the unprecedented route and used Twitter to coordinate rescue efforts. With no real power or money to marshal, she used moral suasion to bring help to citizens on the verge of drowning in the dark. We will never know how many lives were saved by her stepping in during those crucial hours. Still, we are justified in asking why she had to take such an extraordinary move.

During Arroyo’s and Noynoy Aquino’s time, the days before an approaching typhoon would be met with top-level meetings led by either the President or his/her top lieutenants. Bulletins were broadcast repeatedly to inform citizens ahead of time where to go, and how goods are being pre-positioned. And while both presidencies were sorely tested (Typhoons Ondoy and Yolanda), not even the fiercest Arroyo or Aquino critic can say that when disaster struck, they were sleeping at the wheel.

A day after Ulysses sank Marikina and Rizal, information on the number of fatalities confused citizens with each agency having its own “death count” (Palace vs AFP vs PNP vs DILG). Then, as Cagayan was blindsided by floods, rescuers were stopped by officials invoking regulations like authorization papers, 14-day quarantines, and other protocols.

It was only by Saturday, November 14, that the Department of the Interior and Local Government announced that COVID-19 protocols can be lifted in disaster areas in order for rescue and relief operations to freely enter. A visible and proactive leadership would have been able to anticipate and address these concerns as they happened, not hours or days after. More importantly, super typhoons require an aggregated response.

True, we have individual agencies operating “24/7,” but without a firm hand at the helm, confusion can ensue. And when disaster strikes, precious minutes spent unclogging confusion means precious lives lost.

Presidents are not expected to swim in the flood. That would be silly – perhaps as silly as going on “aerial surveys” the day after just to “see” damaged areas and take selfies. One would even call it unnecessary expense. Just like when handlers saw fit to unleash trolls instead of using those funds for relief operations. Reports say a troll gets paid 500 pesos per day. Imagine how many meals a week’s worth of trolling can buy.

And just in case someone pulls out the “wala tayong pera” card, remember that this government decreased the Calamity Fund yet increased the “Intelligence Fund” by billions more. It also defunded crucial resources like Project Noah, while throwing billions elsewhere (“kalderos,” dolomites). And as a citizen pointed out, in 2020 alone, the presidential communications office’s budget was around P 1.6 billion.

Yet, the Palace found time to accuse the opposition of “politicizing” disasters. What it overlooks is that ALL sides of the political divide were asking the same question. And all sides were working to save as many lives as possible. It is not political for leaders to step up during times of crisis; it’s their job.

A President so enamored with emergency powers is expected to be on top of actual emergencies. Citizens have a right to ask, “where is the President?,” as Bicol got wrecked, as Marikina and Rizal went under, and as Cagayan got swallowed by floods in the dark. It is a fair question because these are OUR Billions that they spend after all. He who wins the presidency has the power and resources of government at his disposal. In exchange, he is expected to be awake so the nation can sleep soundly. It seems that in the past 2 typhoons only the residents of the Palace by the river slept well.

And if the highest official of the land is nowhere to be seen or felt as the nation is brought to its knees, we should thank God for sending the 2nd highest to fill that role. Leadership abhors a vacuum. There is no law banning the Vice President from helping citizens in distress. In fact, the Greater Law that binds all faiths impels her to do what she can if she sees her country suffering.

This is why the trolls aren’t being as effective as they were. Does it really matter if the Vice President is “epal” or “pasikat”? Those in Cagayan or Bicol certainly don’t mind. And when critics say she didn’t do anything extraordinary, so what? Yes, she “just showed up.” And thank God she did. Can you imagine if she didn’t? As lawyer and journalist Dana Batnag wryly observed, “That happens when you get a flat tire. You use the spare.” – Rappler.com