Facebook Twitter Copy URL
Copied
'Surely, teachers in Catholic schools cannot bury their heads in the sand every time they see the suffering of their fellow workers'

There are many lists where the Philippines finds itself at the bottom or near-bottom.

For example, in the list of 79 countries that participated in the Programme for International Student Assessment (PISA), the Philippines scored the lowest in reading comprehension and the second lowest in mathematics and science.

But there is a list where the Philippines is among the topnotchers — the International Trade Union Confederation (ITUC) 2020 Global Rights Index Report, which includes the Philippines as one of the 10 worst countries in the world for working people. Thus, President Duterte’s signing of Republic Act No. 11551 — the Labor Education Act — was welcome news. To promote respect for workers and dignity of work in the country, integrating the rights of Filipino workers into the general education curriculum of public and private higher educational institutions (HEIs) is a step in the right direction.

But will it work?

A closer reading of the text of RA 11551 convinced me, however, that the law may not make much of a dent in building a society where future workers, managers, heads of human resource departments, and business owners can work hand in hand to promote economic justice and workers’ participation in workplaces across industries.

Section 4 of the law reads: “All public and private higher education shall integrate labor education as part of an elective course; and as far as practicable, hold a Labor Empowerment and Career Guidance conference which graduating students shall attend.”

I am reminded of a three-unit minor course, offered not so long ago, titled Philippine History, Politics, and Governance, which combines a little of everything from political science, Philippine history, introduction to the Philippine Constitution, taxation, and land reform. My friends who taught the course told me that in general students glossed over these topics. They did not exert much effort nor showed a semblance of interest at all in learning the course. Since it is required for graduation, they just endure it.

Furthermore, the Labor Empowerment and Career Guidance conference is also not mandatory — “as far as practicable.” Who will teach the subject is another question.

But despite these conundrums, the law accomplished something important. It is a conversation starter that could prove transformative as to the crucial role of higher educational institutions in promoting workers’ rights and sound labor relations.

Labor scholars explained that roughly 70% of European workers who have collective bargaining coverage owe it to the influence of Catholicism, which has long emphasized the dignity of labor and views labor unions as essential to the common good. While union density is only at 11% in the US, it is recognized that Roman Catholic ideas such as solidarity, subsidiarity, and co-determination helped promote unionization among workers in the United States.

Thus, we can imagine that Catholic universities and colleges can offer a well-designed labor education course. But more importantly, we can expect that CST permeates institutional practices among Catholic schools — for, obviously, knowledge of the virtues does not necessarily translate to a life of virtue. Teaching CST is not enough in forming the conscience of students so it can make a difference in their future behavior and attitudes as employees, managers, and business owners. Reinforcement is needed, through, in the words of St. John Paul II, more “witnessing actions” from Catholic institutions of higher learning. But here is the rub: while the history of preaching CST in the Philippines is long, institutional practice of CST among Catholic universities and colleges falls short.

In his book Just Universities: Catholic Social Teaching Confronts Corporatized Higher Education, Gerald J. Beyer describes Catholic university administrators in the United States in the context of the neoliberal milieu as having much business and financial acumen, but possessing a superficial understanding of CST. Similarly, many administrators of Philippine Catholic higher education apparently are trapped in the neoliberal discourse of commodification of education, profit margins, and unbridled management prerogative, as they are oblivious to discourse on social justice, economic justice, and labor protection.

Furthermore, it is quite common to hear stories from union organizers about school administrators — priests and nuns beautifully adorned in their priestly vestments and religious habits — who transmogrify, as if they had never heard of CST at all, into livid union busters when teachers speak of freedom of associations, collective bargaining, and strikes. Nonetheless, attitudes of teachers towards organized labor are partly to blame in the tepid promotion of workers’ rights and decent work in Catholic campuses. Some teachers claim that unions are for workers and not for teachers, as if teachers are not workers. Some also claim that unions promote Leftist, socialist, or even communist ideologies.

I remember way back in the 1990’s: two professors from a Catholic school in Southern Luzon visited me for advice on how to thwart the union-organizing activities of some of their colleagues. I grappled for words — aware that I must be nice to visitors — telling them rather obliquely that they were in the wrong place, and I was the wrong person for them to ask. I also remember the first time I tried to organize a coalition of unions in private schools. I was so excited after obtaining a long list of labor unions in private schools from the Bureau of Labor Relations (BLR). I immediately contacted the labor unions in the list. Lo and behold, most of them were gone.

So, how can Catholic higher education respond in a more authentic way to the challenge of the Catholic social vision?

For a start, school administrators and teachers must have robust training on labor issues anchored on CST. School administrators must be transparent with their finances and allow workers to participate in the crafting and determination of policies that affect their working conditions, most especially those that relate to wages and benefits. On the part of faculty unions, they must prioritize labor education, with emphasis on collective bargaining, effective union governance, and coalition building with other workers’ organizations. Surely, teachers in Catholic schools cannot bury their heads in the sand every time they see the suffering of their fellow workers (mostly non-tenure track, fixed-termer, and forever contractual faculty members) in and out of their institutions.

That CST must permeate the hallowed halls of all Catholic schools is an indispensable part of the list of moral imperatives of Catholic higher educational institutions. To pass over CST from the list, out of budgetary constraints or for the sake of the bottomline, seems duplicitous.

In truth, while CST aligns with the Labor Code, Catholic schools do not need the prodding of DOLE armed with the Labor Code or RA 11551. The radical call to authenticity to propagate and live a life consistent with Catholic social teachings dates back 130 years earlier, when in 1891 Pope Leo XIII wrote the landmark encyclical Rerum Novarum. And this challenge continues with a long line of “labor-focused” social encyclicals from Popes Pius XI, John XXIII, John Paul II, Benedict XVI, and Francis. More accurately, it could be traced further down to the Gospels, when more than 2,000 years ago Jesus of Nazareth declared “Wherefore by their fruits ye shall know them.” (Matt. 7:15–20). – Rappler.com

Rene Luis Tadle is a faculty member of the Philosophy Department of the Faculty of Arts and Letters, University of Santo Tomas and a lead convener of the Council of Teachers and Staff of Colleges and Universities (CoTeSCUP).

#StoryOfTheNation: What motivates teachers during the pandemic? 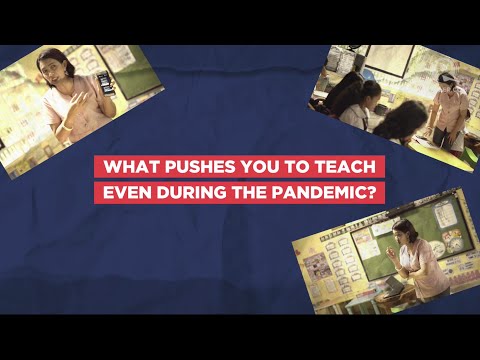