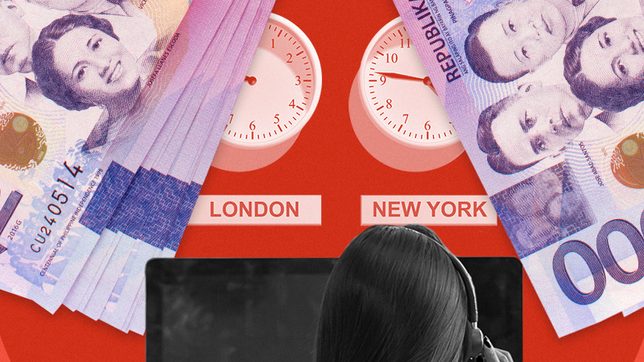 Whenever I put on my headset, I borrow a life that doesn’t exist.

It’s become more and more apparent that our world is shifting into what was once dystopian fiction. We’ve gotten to the point where the very idea of “natural” is itself manufactured, where humanization and authenticity have become ploys.

For work, I had manufactured the identity of an average first-world dweller, a person whose life was but a pipe dream to anyone in the third world. I became the average American woman in her 20s, and you could ask me what the weather was like, what state I grew up in, and my heritage. All this in an effort to secure customer trust, as if my true nationality and identity would compromise my ability to serve them.

My efforts would be rewarded with a measly $150 paycheck at the end of every week. Should I disclose this amount to a client, they’d think I was being exploited. When converted into pesos, however, I earned more than the average Filipino.

In truth, I often wonder if the money is worth my daily depersonalization. My body is in a different timezone, and often confused with when to draw  the line between rest and work. Flexible hours, an appealing perk, is code for nine hours straight of work (although they said you could set your own time for breaks). It doesn’t say in the job description that, even for an introvert like me, the loneliness is crippling.

It’s often lodged in the back of my mind that while I work from the comforts of what is essentially a closet, I’m expected to present as an average American worker, a US-raised Filipina, working from my personal office in my suburban home — a facade held up by my cream-colored curtains, which offer a presentable background for client meetings. My clients’ trust in me is also held together and reinforced with a wig and makeup.

After work, I feel emotionally and physically drained. Others in my field  would tell me that I have it better, that I get to work from home instead of a dingy office building, and that I get the privilege of having a determined set of clients to rotate through, as opposed to not knowing who my next call would be, whether I’d be faced with kindness or fury. I take these comments as motivation to love my job. After all, they were right – I had it better, and who was I to be ungrateful?

I’m the youngest person in the company, starting work at 18. The decision to take on the job was brought about by my aversion to college. I hated academics, not because it was difficult to cope with, but because I felt it was cyclical, a shackle, something that rewarded uniformity — which I’ve always failed at exhibiting. It didn’t help that proud degree holders such as my colleagues were paid the same as myself, an inexperienced kid on the cusp of adulthood. Their four years of college, a long, arduous, and expensive journey, would end in a career mismatch. It was tragic, yet common.

My sentiments were echoed by my parents, college dropouts who had high-paying careers, though my mother quit working at the height of her career to focus on family. I took their guidance when I was deliberating on whether to go to college or not. We broke down what opportunities I could take up instead.

Business Process Outsourcing or the BPO industry in the Philippines contributes greatly to the nation’s economy. It’s the largest sector in the country, and understandably so, as it gives people who otherwise would’ve been unable to have a well-paying office job the chance to have one. For  Filipinos, it’s a chance to sustain ourselves and live in comfort, and for the foreigners that recruit us, it’s an opportunity to fuel their own empires with an inexpensive workforce. Despite what seems like a fair trade-off, I can’t help but think of how exploitative the idea is. It’s slavery at its most consensual.

My story is one of many (of 1.2 million, to be exact). It’s a field of low risk, high stress, and decent reward. Regardless of what opinion you may have of the BPO industry, though, this still points to a bigger problem.

In our capitalist society, third-world countries are factories that  manufacture people as cheap, customizable commodities. People who can fit into a mold, adapt a tongue, and create the illusion of authenticity to please the whims of the privileged.

It’s a sad reality, but maybe if we talked about it enough, these 1.2 million stories may become tales of  empowerment. – Rappler.com

Theryce Bernardo is a 2020 HUMSS graduate from St. Paul College, Pasig, and the Vice President for Partnerships and Linkages of Kabataang Tambuli ng Pasig.