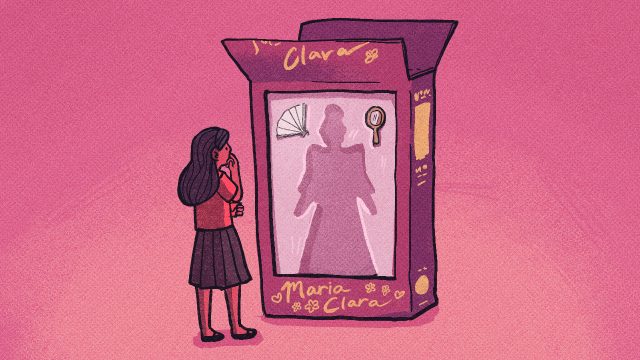 Facebook Twitter Copy URL
Copied
'The Maria Clara I rediscovered was different from the one I remembered. Rather than a beauty never heard, she was candid, teasing, melancholic, stubborn.'

What does the fictional character Maria Clara mean for our generation of women and our struggle today?

Full disclosure: I wasn’t drawn to Noli Me Tangere and El Filibusterismo until after college. I struggled with Filipino because my high school penalized its use, and the language barrier was enough to discourage me when I had access to other books – in English, which was easier to read.

When I entered the Ateneo, there was already a concrete picture of Maria Clara in my head: docile, beautiful but self-effacing, subservient — worlds different from my friends and I: ambitious, outspoken, political. Maria Clara incarnated the Dalagang Filipina, an imposition we fought against.

Our generation in school was taught that our alumni played leading roles in the Philippine Revolution, died during Martial Law, marched in EDSA. I starkly remember a speech at my graduation underlining the importance of being Filipino amid the atrocities of the present government. In this context, it was enraging that Maria Clara persisted as our image of femininity. So when the English translations of Rizal’s book were published, I couldn’t be bothered.

Friends within and beyond Katipunan, as well as inspiring professors, convinced me otherwise. I had first explored the original, but with it still being beyond me, I turned to the French, since I had a minor in the language. I returned to it again recently; living abroad and watching in horror the events unfolding in the Philippines, I needed a link home, something that would allow me to feel close from a continent away.

The Maria Clara I rediscovered was different from the one I remembered. Rather than a beauty never heard, she was candid, teasing, melancholic, stubborn.

I laughed at her reunion with Crisóstomo Ibarra, where she recalls a moment from their childhood: on vacation from the Ateneo, Ibarra had bragged about the Latin names of plants in the stream, and how, ignoring mythology, his mother had pulped “Chloë’s crown” to wash the children’s hair.

She fails at distracting herself during Padre Dámaso’s dragging sermon and falls asleep. At a picturesque picnic, she doesn’t stop her friends from mocking their chaperones, and overtly discusses her dislike of Padre Salvi. There is docility, appropriate to the time, but in this idyllic episode, one line struck me — Si Maria Clara ne s’évanouit pas, c’est que les Philippines ne savaient pas encore s’évanouir (If Maria Clara did not faint, it is because the Filipina did not yet know how). What a far cry from how our lolas were portrayed!

Tragedy strikes. Following an altercation between Ibarra and Padre Dámaso, she becomes ill, and discovers the truth of her birth. She was born of her mother’s rape by Padre Dámaso, and her mother dies after unsuccessful attempts to abort her.

To protect the reputation of her biological and adoptive fathers, she agrees to marry another man. Then, following a staged revolt which condemns Ibarra and mistakenly reports him as dead, Maria Clara, going against the idealization of feminine obedience, forces Padre Dámaso to end her engagement and allow her to enter Santa Clara as a nun, where, in lieu of solace, Padre Salvi, author of the chaos, systematically rapes her until her death. Maria Clara’s last scene sees her on the convent roof during a storm, cursing the heavens for her fate.

It is important to remember that most translations for Filipino schools omit these details, as they are considered themes inappropriate for students’ “values.”

Yet, that is the ideal Filipina: child of rape, victim of rape, embodiment of how, for centuries, the Philippines saw its women as mere objects to violate. Maria Clara is famously inspired by Leonor Rivera, Rizal’s childhood sweetheart, who was forced into marrying an Englishman. Rivera dies at childbirth after insisting she be buried with the ashes of Rizal’s letters, which she had managed to keep.

In fiction, misfortune continues with Basilio’s fiancée Juli, a child asking for a doll in Noli, now transformed in El Fili into a servant and potential rape victim. Juli escapes her fate by mirroring Maria Clara, jumping off the roof of the convent to escape the insatiable Padre Camorra.

What is the idealized Filipina, then? Mestiza raped in a convent, ilustrada sold into marriage, india killing herself. Suffering is central to these women. And the rest of Rizal’s characters? Sisa is driven to madness by a corrupted system, Doña Victorina assumes a different race to escape the demeaning of her own, Paulita Gomez is a non-entity, a trophy wife.

Looking at things from the present, could we argue that Philippine society simply missed the point for over a century? In 2017, the #MeToo movement made headlines even in countries known for their conservatism. In the Philippines, people recalled the gang rape of actress Pepsi Paloma and her death in an apparent suicide. To this day, her rapists maintain esteemed positions within Philippine society.

A few years ago, people were indignant over the possible pardon of Antonio Sanchez for the gang rape and murder of UP Los Baños student Eileen Sarmenta. The results of the autopsy had been made public since and highlighted the brutality and inhumanity of what transpired. As for 2021, it opened with the unresolved case of the rape and death of flight attendant Christine Dacera.

It is also inevitable that we recall Martial Law and how rape was deployed as an instrument of the State. Many survivors stand opposed to the present government, which has normalized rape culture through the president’s inappropriate discourse, which verge on verbal sexual harassment, as well as his pardoning of Joseph Scott Pemberton, a soldier responsible for the murder of Jennifer Laude, a trans woman. Of course, the consistent denial of the events of the Marcos Years and what is happening presently under Rodrigo Duterte are symptomatic of the ills of Philippine society.

So, given all of this, perhaps Maria Clara is indeed the embodiment of what our country envisions as the perfect woman.

What then does the “perfection” of Maria Clara mean for us women of the 21st century? Do we willingly conform to this glorification, or are we forced into it? Can we oppose this ideation for the sake of Maria Clara and ours?

Maria Clara has been dead for over a hundred years. Let her rest in peace. – Rappler.com

Kathryn Reyes is a 20-something expat living and working la vie bohème in Spain. She is relentlessly passionate about politics, world history, culture, literature, and a good flat white coffee.